Once out of the southern parts of the Catskills, the Long Path enters the more well traveled and civilized regions. The trail joins the Devil's Path, one of the most strenuous hiking trails in New York, and passes near the former sites of two large hotels. Both hotels played a huge role in the development and then subsequent protection of the Catskills as an area "forever wild" to be spared from logging and other encroachments of civilization on nature. North Lake State Campground now occupies the land owned by both hotels in order to preserve the landmarks and vistas seen by the rich and famous when the Catskills were "the" place to go to for travel and vacation. The trail also passes a bounty of waterfalls, some directly on the trail and some nearby. Kaaterskill Falls, a short distance from North Lake State Campground, has two major drops, each a major waterfall in its own right, that add up to the tallest falls in New York State. 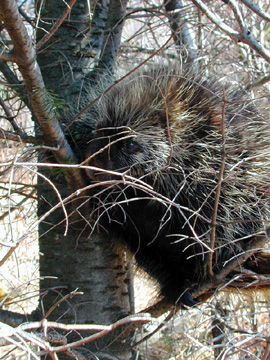