The Invasives Strike Force (ISF) crew, as part of the Trail Conference Conservation Corps and funded through the Lower Hudson PRISM, is a conservation-based crew devoted to eradicate, contain and prevent the establishment of emerging terrestrial invasive species within the Lower Hudson Valley in order to protect our high-value habitat through the use of skilled labor within the region. 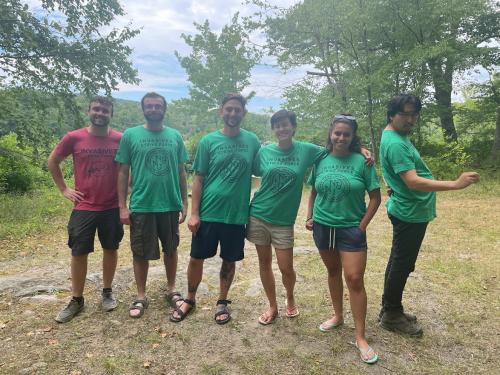 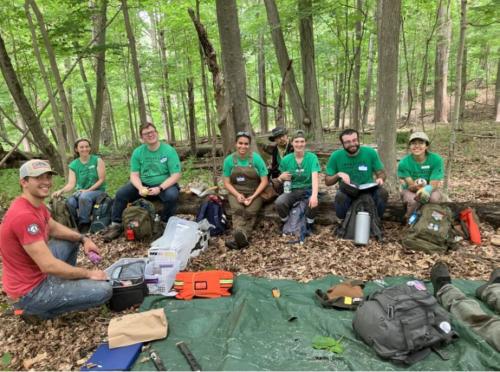 This month, the ISF crew continued the battle against invasive species. We started by managing a crowd favorite, Scotch Broom, at the Ralph E. Ogden Foundation with the help of our very own Tori and Krysti! There was a plethora of native species to observe including deer tongue, rattlesnake weed, blue toadflax, and mountain laurel.

After that, we continued our campaign against invasive species tackling giant hogweed and treating over 1000 plants this year! Since the plant has hazardous sap that can burn your skin, we suited up in Tyvek to avoid the hazardous sap. Years of management have had significant results as 30 out of 41 sites have had no plants for at least one year. Eradication of giant hogweed in the Lower Hudson Valley is within our grasp!

Our crusade at Croton continued as we revisited the Old Croton Aqueduct and Croton Point Park to manage invasive species. At Old Croton Aqueduct, we partnered with the Aquatic Strike Force to manage Siebold’s viburnum and other widespread invasive species. We managed 3106 plants that day and finished cutting down all the tall Siebold’s viburnum trees that were in immature fruit. Lots of the understory also opened up to make way for native Virginia bluebells to expand their population. At Croton Point Park, we completely treated the only population of Chinese bushclover in the area. Special thanks to Shoshana Daly for all the help!

We also helped with upkeep of spotted lanternfly traps in Orangeburg, NY. We managed surrounding vegetation spotted lanternfly loves to feast on so that the lanternflies will congregate in the traps. We are excited to be a part of this important project managing this economically and environmentally destructive species and will continue to support spotted lanternfly management!

Many of our projects this month managing invasive species were critical in protecting the habitat of native species. We worked with the Scenic Hudson Land Trust and the Catskill Stewards removing Japanese spiraea to open up room for sensitive species in the area including the endangered cattail sedge and rare creeping bushclover. At Iona Island we managed Chinese bushclover, cutleaf blackberry, and Japanese angelica tree to make way for the only native cactus species in the eastern United States, eastern prickly pear cactus, as well as protecting sensitive wetland habitat.

Lastly, we started a big project managing sticky sage along the Appalachian Trail. We noticed that the populations of sticky sage have significantly shrunk from last year from monocultures into sparser patches which is extremely encouraging for eradication! We prioritized management of the Appalachian Trail to prevent the spread by hitchhikers and searched 35 acres managing 3073 plants over 3 days!

Stay tuned for further progress of sticky sage along the Appalachian Trail as well as exciting volunteer workdays in the month of July!

May
A Call to Adventure 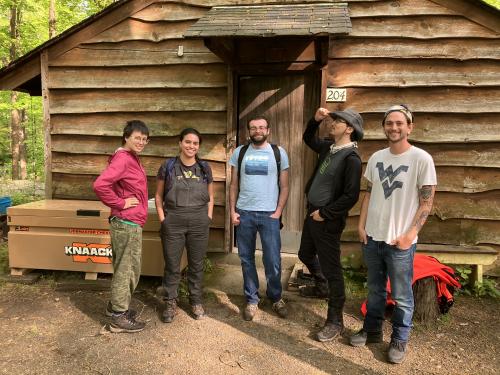 In a distant land where Major Welch’s fortress resides, a call was made to protect the Lower Hudson Valley from the dastardly invasive species wreaking havoc upon this earth.  Five brave souls answered that call: Stephen, Bella, Zack, Danny, Claire and their fearless leader, Ryan.  After intense training on plant identification, pesticide wielding, and rattlesnake taming, the Invasive Strike Force went out on their first hunt.

Our first target was the sinful chocolate vine (Akebia quinata), tempting the gluttony of the masses with its sweet, chocolate scented flowers.  They invaded the Lenoir Preserve with a fury, creating dense mats in the understory and crowding out native species. Using the power of the foliar sprayers, the Strike Force brought 14,668 sq ft of dense chocolate vine understory to its knees before its malicious vines spread to the Old Croton Aqueduct where its power would be unstoppable.

Right as we were spraying the last chocolate vine, we heard a call for help from the Hudson Highlands Land Trust.  The wicked yellow archangel (Lamium galeobdolon) and linden viburnum (Viburnum dilatatum) had snuck their way into Granite Mountain.  Once thought to be guardians against evil spirits and spells, yellow archangel has turned into the very thing it swore to destroy.  Disguising themselves as native species, they were unknowingly planted as ornamentals only to reveal themselves as tenacious spreaders, taking over hillsides and decimating diverse understory.  The ISF stormed in and tore up 3,868 yellow archangel and linden viburnum, saving Granite Mountain from becoming a green desert of death.

For our last quest of the month, the keepers of the Old Croton Aqueduct summoned our forces to save their native bluebells from various invasive species including the foul Siebold’s viburnum (Viburnum sieboldii).  Foul not only in odor, but in character as well, they contributed to shrinking native bluebell populations by shading the understory.  For this foreboding task, we sought counsel from the wise enchantress, Diane Alden.  She conjured up water, snacks, and volunteers to aid us in our task.  With the help of Diane and the Friends of the Old Croton Aqueduct, we struck down 1,850 plants including Siebold’s viburnum, tree-of-heaven (Ailanthus altissima) Oriental bittersweet (Celastrus orbiculatus), wineberry (Rubus phoenicolasius), multiflora rose (Rosa multiflora), and garlic mustard (Alliaria petiolata).

In total, we saved 378752.2 sq ft of land from the evil claws of eight invasive species.

Our quest continues in the coming months where we face formidable foes, trek treacherous trails, and protect precious natives.