Our Stewards have been bringing face-to-face user education and sustainable, on-the-ground solutions to some of the region’s most popular outdoor destinations since 2013. They are key in protecting the ecological integrity of these special places being threatened by issues such as misuse and high usage. By encouraging public participation, Stewards are a solution multiplier. 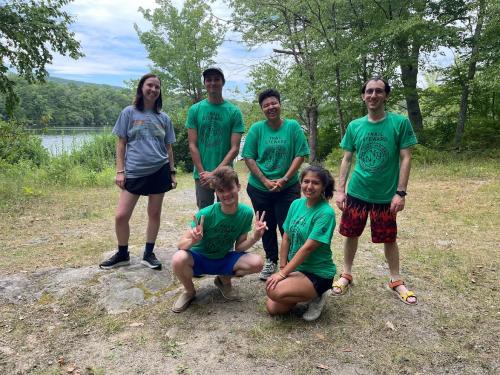 The Long and Winding Road

June was an action packed month. With multiple trainings and collaborations with other crews, the Hudson Valley Trail Stewards have been hard at work to ensure the proper education of folks out on the trails.  In the beginning of the month, they gained three additional members, Charlene, Declan, and Ryan, which helped support the two busy locations. With many changes that have occurred with how we steward, who we steward with, and where we steward, the new members have taken the changes in stride. They’ve been great additions to the team!

The Hudson Valley Trail Stewards started off with Wilderness First Aid training where they, along with the Catskills Stewards and some Trail Crew members, learned how to perform CPR and other medical assistance depending on the situation. Later in the month, the stewards had Leave No Trace Training led by the Stewards’ Program Coordinator, Myra Romano and the NYNJ Trail Conference’s Executive Director, Joshua Howard. Activities were led by Conservation Corps members and provided valuable takeaways on how to approach conversations with folks when discussing Leave No Trace principles. 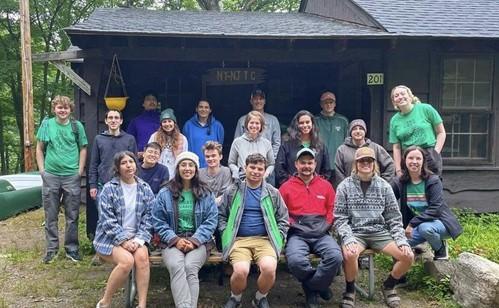 The last training in June was for the new Fjord Trail that will be built near the Breakneck Ridge Trailhead starting in late 2022, early 2023. This new trail will involve a variety of terrain that will be ADA accessible and give people the opportunity to walk close to the Hudson River without hiking intense terrain that they may not be prepared for. This will cause the Breakneck Ridge Trailhead to be closed once construction starts but the amenities will be worth it in the long run! 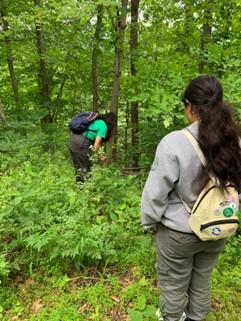 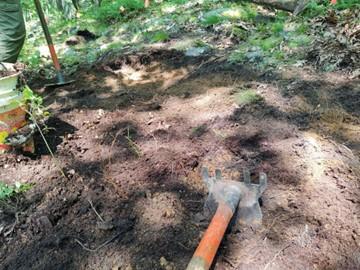 With a busy yet fulfilling month, the Hudson Valley Trail Stewards have been able to engage with new work from other crews, learn about trail maintenance, and train to further our educational outreach. As the weather gets hotter and locations get busier, they are looking forward to successful and knowledgeable conversations with folks in the outdoors!

May
May Showers Bring More People Per Hour

The first weekend of stewarding came with its fair share of challenges but that did not prevent the Hudson Valley Trail Stewards from starting off their season with great enthusiasm. The DEC wanted at least one Trail Steward posted at Croton to ensure people did not use the old social trail but we were scheduled to be at Breakneck for Memorial Day weekend. The Trail Stewards, with the help of a Trail Crew member, Onely, were flexible with that change. With our mornings at Breakneck and afternoons in Croton, we got the perfect introduction to stewarding at both locations. 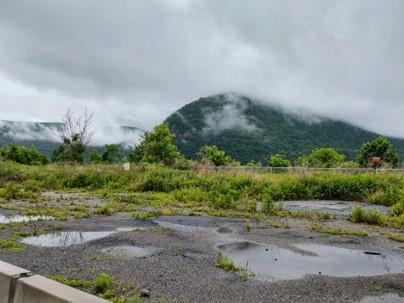 With intense rain on Saturday, we saw only 22 Breakneck visitors and trained for the Croton Gorge Unique Area, becoming familiar with our roles at that location. Sunday’s sunny weather provided a reprieve from the gloomy weather and a spike in the numbers at Breakneck. The Trail Stewards saw over 600 people in 4 hours at Breakneck with many of them coming from the now opened train stop. The Trail Stewards were thankful for the extra assistance Hudson Highlands State Park provided due to the business of the location. Many people that we interacted with came from countries around the world, some of those places being Australia, Spain, and England. Interacting with people from other areas made us excited to continue educating folks about the area and Leave No Trace principles.

Both sunny days at Breakneck, the Trail Stewards found themselves often guiding hikers into Cold Spring or Beacon in order to catch the MetroNorth back into New York City. We anticipate the need to become more familiar with the train stop locations and times in order to best assist hikers on the trails. We found many of our conversations with hikers were based around the need for water, the challenge for larger dogs on the hike, and the need for a Trail Map. As we continue to steward at this location, we feel we will become much more efficient in our communication surrounding these topics and more. 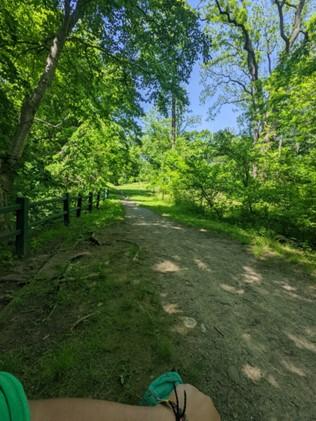 The Trail Stewards had slower afternoons at Croton with only 5 people on Sunday asking about the old social trail and 11 on Monday. Many of the people asking about a way down came packed for a day by the water but had to make the journey back home because of the trail’s closure. When provided with alternative areas to picnic, people took note of them but were curious if there was still a way to get down to the Gorge in order to enjoy a park they have visited for years. The Trail Stewards were quick to express that the trail will be open eventually but at the moment that specific trail is closed. With the small numbers that came, it was a smooth introduction to the area and the encounters we will have with visitors. The Trail Stewards will most likely still interact with people who decide to ignore the closure of the social trail but we have the support of the Forest Ranger when those conversations happen.

We are looking forward to our Leave No Trace training in June and the addition of new Trail Stewards this season. The new Trail Stewards will make great additions to the team and we are excited to continue improving our stewarding skills and our effectiveness at both Breakneck and Croton.

During the month of June, the Catskill Trail Steward Crew saw tons of excitement, and learned a lot as we continued on our journeys to become the best stewards possible! So many firsts, and so much learning happened this month, as well as a nice big welcome to the two newest crew members who joined the pack! 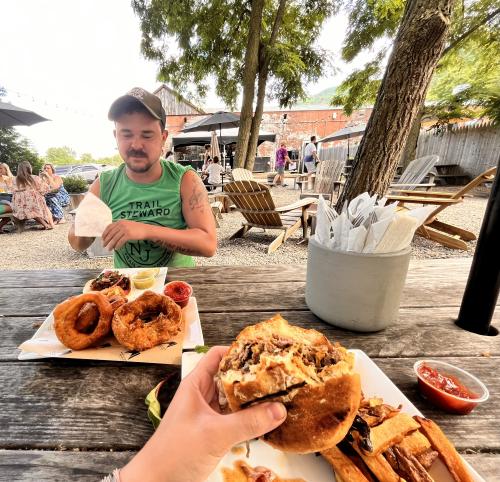 Finally settling in to life up in the ‘skills, the team got the chance, this past month, to explore many of the local businesses and parks (those that we do not even steward) that we would be recommending to curious hikers and travelers all throughout the season. Onteora Lake and Hickory BBQ & Smokehouse are some crew favorites, but Bread Alone, Woodstock Brewing, Rough Draft, and Kenco Outfitters also have seen a lot of us throughout the month. 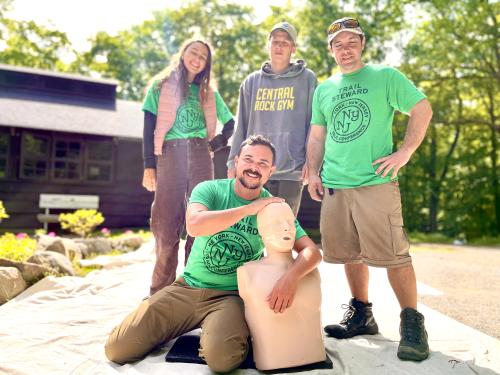 During June, the crew also finished up our last few bits of training before going into our first month of our official service weeks. We started the month at the Welch Trail Education Center earning our certifications in Wilderness First Aid training, courtesy of Mid-Atlantic Outdoor Recreation Education (MORE), and in Leave No Trace Education. Aside from getting the opportunity to meet and learn/work with some of the other Trail Conference Conservation Corps crew members, the Catskill crew also learned valuable information that would proceed to help us greatly in the field. We also completed our last trail training at Wittenberg Mountain, officially making us Catskill Trail Stewards for all five of our assigned high peaks. 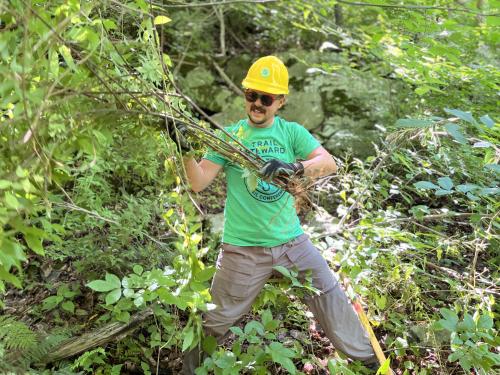 In another sort of education, the crew also got to experience our first ever day of trail maintenance with longtime organization volunteer Andy Garrison. We met up with the volunteers at the Lane Street trail and got to make crush, dig dirt, and move stepping rocks to maintain some pre-existing trail all for the first time. We also spent a day collaborating with the Terrestrial Invasive Strike Force Crew in Kingston where we learned all about the world of invasive species detection and removal while helping the ISF and Scenic Hudson folks to remove the highly invasive Japanese Spirea. 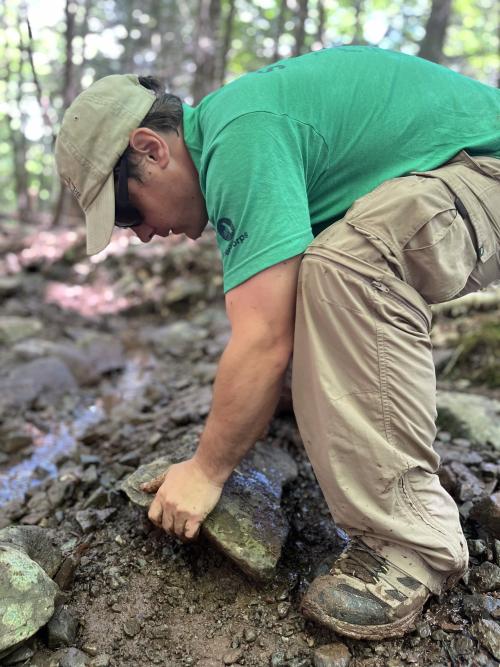 After all of our training concluded, and we were introduced to the world of trail maintenance, the crew launched our maiden voyage to help educate the public and interpret the park rules and regulations for the next four and a half months. For the month of June, the stewards saw a 223% increase in park 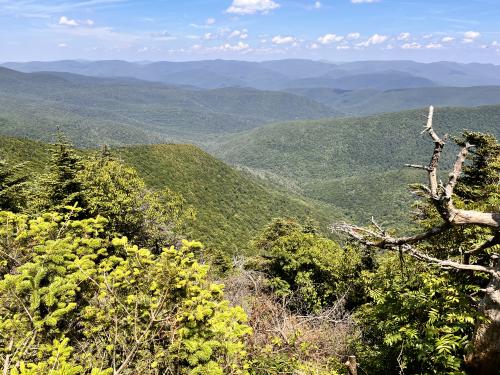 attendance during their service days from May, which certainly meant that the stewards had a pretty hectic month cut out for us. Between the five mountains we stewarded, the crew was able to educate nearly 460 hikers, making it our most successful month in terms of educating the public so far! And as summer crowds continue to swarm the parks, the crews are ready to prepare for an even busier July!


May
Two’s Company, Tree’s a Crowd

The Catskill Trail Steward crew had a super exciting, informative, and enriching first month of the season. A lot was packed in to send us off on our journeys of stewardship these next few months.

We started our month with three of the five stewards moving to the Catskill location in Shokan, New York. With a mix of experienced and novice hikers/outdoors persons, the crew was already a diverse mix coming from different careers, life stages, and locations. Even though the Catskill Trail Stewards, when compared to many of the other Corps crews, have a much more solitary job (with us spending most of our days by ourselves roving the mountains/summits), the bond that has been developed between us, despite our differences, has definitely made it easier to learn from and use each other to become better stewards. Within the first two weeks, the crew visited three of the many locations that we will steward later on in the season. We learned about campsite etiquette, how best to respond to questions from hikers/backpackers, how to use our various technological tools such as Avenza Maps and Seek, how to communicate with radios, and we completed training with the New York State Department of Environmental Conservation (DEC). All of this prepared us for our first official weekend of stewarding both for the month and for the season.

That weekend, we embarked on our journeys to the first mountains we would steward; Slide, Giant Ledge, and North Point, where we counted over 660 people. Putting all of our training to the test and tapping into our knowledge of the locations, Leave No Trace principles, and passion for stewardship, we were all even able to educate over 140 people! 3 illegal campfires were detected and dismantled at the Slide and North Point locations, a few cairns were toppled over, and even ate some ice cream (as part of the job, stewards patronize local establishments so we can make recommendations to weary travelers based on their needs/wants. In terms of ice cream, I recommend the Old Fashioned Ice Cream counter right off of North Lake Road before you get to the North Point trailhead).

One of the other exciting aspects of stewarding we learned about was seeing all of the little critters scurrying around; particularly the Eastern Newts which, according to Trail Steward Amanda, look like little, orange Kermit the Frogs. Overall, this month was a great introduction to our responsibilities as Trail Stewards in the Catskill region. It was also a great way to get us comfortable with each other, and create a cohesive team bond that will carry us through the season. In the coming months, the crew looks to continue our training and develop expertise in Leave No Trace principles, Wilderness First Aid, and trail maintenance tasks. As well, we are excited to welcome the two newest stewards to the team and continue great work educating the public on hiking best practices and respecting the land!