In 800 feet, as the road curves to the left at a concrete catch-basin, the red-on-white blazes of the Ramapo-Dunderberg (R-D) Trail (which you have been following along the road) turn right, into the woods. Here, a triple white blaze marks the start of the Kakiat Trail. Follow this white-blazed trail uphill to the right, along a woods road. The trail climbs to a shoulder of the hill, then bears right and levels off on another woods road, with cliffs on the left and views through the trees of the village of Tuxedo below to the right.

About half a mile from the paved road, the trail descends to cross a stream. After climbing over rock outcrops and passing a wetland on the left, it joins another woods road that curves around the foot of Dater Mountain, passing huge stone blocks that have fallen from the cliffs on the left. At a T-intersection, the Orange Trail begins on the right, but you should bear left, continuing along the Kakiat Trail. 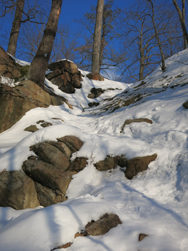 n a quarter mile, you'll reach another T-intersection, where the Blue Disc Trail (blue dot on white) comes in from the right. Turn left onto this trail, which follows an old woods road, soon beginning a steep climb. About halfway up, it turns right, crosses a stream, and climbs even more steeply over rocks to the top of Almost Perpendicular -- a panoramic viewpoint from a cliff. Seven Lakes Drive is directly below, with the Ramapo Mountains in the background.

Follow the Blue Disc Trail north along the ridge. After a slight descent, the trail climbs steeply up Pound Mountain and continues along the summit ridge. It crosses a gas pipeline and descends parallel to the pipeline.

After passing a wetland on the left, the Blue Disc Trail climbs 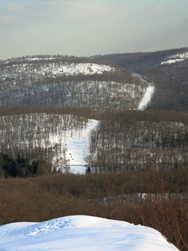 to intersect the red-dash-on-white-blazed Tuxedo-Mt. Ivy Trail. Continue to follow the blue-on-white blazes to the top of Claudius Smith Rock, a dramatic cliff with a west-facing view.

The Blue Disc Trail now descends over slabs of bare rock and passes to the right of some young birch trees. Next, it climbs Big Pine Hill, with a panoramic view, and descends over sloping rocks (use care if the rocks are wet or covered with ice). Near the base of the descent, it turns sharply left. Soon, it bears right and crosses a natural rock dam to end at Tri-Trail Corner, where it meets the R-D and Victory Trails.

Turn left and follow the red-on-white-blazed R-D Trail, which crosses the brook on rocks, bears right and heads downhill on a woods road. Soon, it turns left and begins to climb. Near the top, it joins a woods road and begins to descend, passing mine pits on either side of the trail.

After recrossing the gas pipeline, the R-D Trail turns left and climbs to a viewpoint over the village of Tuxedo. It then descends, steeply in places. After passing a junction with the Triangle Trail (blazed with yellow triangles), the R-D Trail descends on stone steps (constructed by an AmeriCorps trail crew of the Trail Conference in the summer of 2020) to Grove Drive. Turn left onto Grove Drive, then right onto East Village Road, and follow it back to the parking lot where the hike began. In 800 feet, as the road curves to the left at a concrete catch-basin, the red-on-white blazes of the...

Follow N.J. Route 17 north to the New York State Thruway and take Exit 15A (Sloatsburg). Turn left at the bottom of the ramp onto N.Y. Route 17 north, and continue for 4.9 miles, passing through the villages of Sloatsburg and Tuxedo. Just past the Tuxedo railroad station, turn right onto East Village Road, cross the tracks, and turn left into a commuter parking lot (free parking on weekends; $3.00 parking fee on weekdays).

rate experience
July 11, 2017
0
You can start this hike at another trailhead to avoid fees
Since I consider myself to be a cheap person, I did this hike starting from the circle at the end of Jonestown Road. From there, you can pick up the blue disc trail and follow it into the kakiat trail. It is sort of like doing this hike in reverse. The small detour didn't add much time to the hike, maybe 15 minutes at most.
bromli
February 18, 2015
0
Be prepared
<p>If you do this hike in the current snow conditions, be prepared with the proper layered clothing and footwear. Ice creepers and snowshoes might be in order.</p>
[email protected]
September 11, 2009
0
We do not encourge phantom maintainers
<p>Glad you enjoyed the hike. </p><p>The blazing problem has been reported to the trail supervisor for that area and should be taken care of promptly. </p><p>Others encountering trail maintenance problems should fill out a trail report <a href="/webform/trail-problem-report">www.nynjtc.org/webform/trail-problem-report</a>.</p><p>If you would like to maintain a trail yourself, click on Volunteer Now in the upper left of any page. </p>
webmaster
More Reviews
Log in or register to post comments