This is a “lollipop”-loop hike; however, the “stick” (the portion of the hike which must be retraced) is 5.3 miles long, and the loop around Nuclear Lake is only 1.9 miles. It involves over 1,500 feet of cli 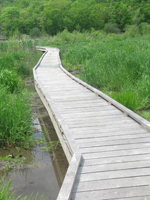 mbing overall, but most of the ascents are not exceptionally steep. The hike traverses an attractive, wooded area and features a number of panoramic views.

From the parking area, proceed south along Route 22. In a short distance, the white-blazed Appalachian Trail (A.T.) joins from the left, near a kiosk. Continue south along Route 22 for another 500 feet, then turn right and cross the highway just south of a garden and landscaping center. You’ll immediately come to the Appalachian Trail station of the Metro-North Railroad (limited service, only on weekends). Cross the tracks and continue across a wetland on a1,600-foot-long boardwalk, constructed between 2009 and 2012 by volunteers, with the assistance of the Mid-Atlantic Trail Crew of the Appalachian Tra 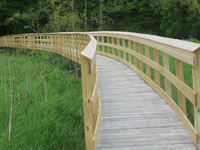 At the end of the boardwalk, you’ll cross a bridge over the Swamp River. The trail now turns right and climbs a little, heading north along the base of Corbin Hill. In two-thirds of a mile, after passing through a gap in a stone wall, the climb steepens, with the last part of the climb utilizing switchbacks.

About a mile and a half from the start, you’ll reach the top of Corbin Hill. The trail heads through the woods for about 500 feet and 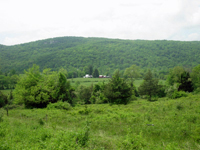 emerges onto an overgrown field. It follows along the edge of the field, with woods on the left, and begins to descend. In another 750 feet, you’ll come to the end of the field, briefly traverse a wooded area, and emerge onto another field. Ahead, to the west (beyond the fields), you can see a hill, known as West Mountain, in the distance. You will soon be climbing to the top of this hill!

Follow the white A.T. blazes, which turn left and follow the edge of the field (which is surrounded by a barbed wire fence that may be electrified). The trail continues to descend, with woods on the left. At the base of the descent, it crosses a wet area on puncheons and a bridge, th 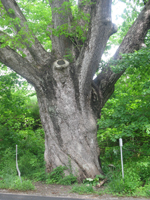 en crosses a stone wall. It descends a little more and cuts across a corner of the field, following a switchback down to West Dover Road (County Route 20). Just before reaching the road, you’ll pass the Dover Oak. This white oak, estimated to be about 300 years old, has a circumference of over 20 feet, and is believed to be the largest blazed  tree along the entire A.T. from Maine to Georgia.

On the other side of the road, the trail descends to cross a wet area on rocks and puncheons. A short distance beyond, the trail climbs a jagged rock outcrop and begins its steady ascent of West Mountain, crossing a stream on a wooden bridge along the way.

After climbing for about half a mile, you come to an intersection, where a side trail leads to the Telephone Pioneers Shelter. Turn left and follow the blue-blazed trail, which crosses a stream and leads in 500 feet to the shelter, constructed by the White Plains Council of the Telephone Pioneers of America in 1988. The picnic table in front of the shelter is a great spot to eat lunch or just take a break.

When you’re ready to continue, retrace your steps to the A.T. and bear left at the int 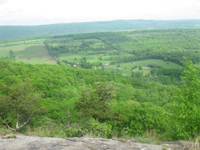 ersection. The trail climbs some more, soon approaching the grass-covered summit ridge of West Mountain. Just below the summit, a side trail on the right leads a short distance to Cat Rocks – a panoramic east-facing viewpoint from an open rock outcrop. Down below, you can see West Dover Road, with fields beyond. The trail that you took earlier in the hike follows the edge of these fields (you can see the path that cuts across the corner of the field just east of the road!).

For a round trip of 6.6 miles you can retrace your steps after taking in the view, but if you wish to continue, return to the A.T. and turn right. The trail climbs very gently to the height of land on West Mountain (1,205 feet), marked by a rock outcrop. You’ve climbed nearly 700 feet from West Dover Road to reach this point.

The trail now begins to descend. In about half a mile, it crosses a stream, the outlet of a wetland to the right of the trail, and a short distance beyond, it goes across Penny Road – an old woods road, bordered on each side by stone walls. It continues to descend until it reaches a large wetland, crossed on a wooden bridge. The trail crosses another wet area on puncheons and begins a gentle climb.

After reaching the crest of the rise, the trail descends, first rather steeply, then more gradually. In half a mile, it reaches a fork. Here, the blue-blazed Beekman Uplands Loop Trail begins on the right, but you should bear left to continue on the A.T., which runs above an interesting ravine on the left. The trail continues to descend towards Nuclear Lake – named for the nuclear fuel research facility that operated here until 1972. After the property was acquired by the National Park Service as part of the A.T. corridor, the buildings were razed and the area was extensively tested and found suitable for recreational use by the public. 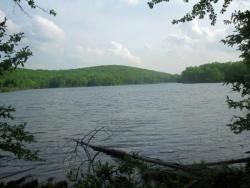 Near the shore of the lake, you’ll reach a junction with the yellow-blazed Nuclear Lake Loop Trail. This trail will be your return route, but for now, you should bear right to continue on the A.T. You’ve now hiked 5.3 miles and completed the “stick” of the “lollipop.”

The A.T. follows the northwest shore of the lake, running close to the lakeshore for part of the way, with views across the lake. After a while, it reaches a small grassy clearing and continues along an old gravel road, passing some more clearings along the way. It follows the road for about 0.2 mile, then bears right, leaving the road, and continues on a footpath through the woods.

After passing an interesting split rock covered with ferns, the A.T. reaches a T-intersection at the outlet stream of Nuclear Lake. Here, the A.T. turns right, but you should turn left and follow the yellow-blazed Nuclear Lake Loop Trail, which begins here. The trail passes a scenic waterfall and soon reaches the gravel road leading into Nuclear Lake. It turns right and follows the road for 100 feet, crossing the outlet stream, then turns left, re-enters the woods, and follows a rocky footpath parallel to the southwest shore of the lake.

As it approaches the southeastern corner of the lake, the trail briefly joins a woods road, then turns left, descends through mountain laurel, and crosses the inlet stream of the lake on rocks. The Nuclear Lake Loop Trail ends, near the northeastern corner of the lake, at a junction with the A.T. Turn right onto the A.T. and follow it for 5.3 miles, retracing your steps back to the parking area where the hike began.

Cat Rocks and Nuclear Lake on Appalachian Trail in... This hike traverses a secluded section of the Appalachian Trail, with several viewpoints, and circles an attractive lake.

This is a “lollipop”-loop hike; however, the “stick” (the portion of the hike which must be retraced) is 5.3 miles long, and the loop around Nuclear Lake is only 1.9 miles. It involves over 1,500 feet of cli...

From the George Washington Bridge, proceed north on the Henry Hudson Parkway, which becomes the Saw Mill River Parkway. Take Exit 4 and continue on the Cross County Parkway, which becomes the Hutchinson River Parkway North. After about eight miles, bear left and continue on I-684. When I-684 ends in about 29 miles, continue on N.Y. Route 22 North. Follow Route 22 for about 15 miles until you come to a parking area (marked by blue signs) on the right (this parking area is 1.9 miles beyond the traffic light at Coulter Avenue in Pawling, and just beyond a garden and landscaping center on the left). Park in this parking area.