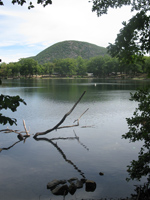 From the parking area, proceed west (towards the mountain) on a paved path that runs along the south side of the Bear Mountain Inn. About 400 feet beyond the Inn, you’ll reach a junction of paved paths, marked by a trail sign. Turn right and follow the red-circle-on-white-blazed Major Welch Trail (named after the park’s first General Manager, who was instrumental in creating the extensive hiking trail system in Harriman-Bear Mountain Parks). The Major Welch Trail proceeds north along a relatively level paved path, following the western shore of Hessian Lake and passing views of Anthony’s Nose (across the river) and a tower of the Bear Mountain Bridge.

In about half a mile, near the northern end of the lake, the trail bears left (at a sign for the New York State Environmental Protection Fund) and climbs stone steps. Soon the trail levels off, then climbs more gradually on a rocky footpath. After passing a water tank, above on the left, the trail descends slightly on a dirt road, then bears left and continues on a relatively level (but very rocky) footpath through dense mountain laurel. If there are no leaves on the trees, you may notice, below to the right, the flat-roofed Overlook Lodge, part of the Bear Mountain Inn complex. 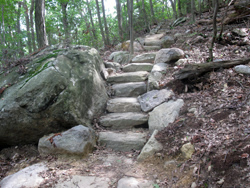 In another 0.3 mile, the trail bears left and resumes its climb of Bear Mountain. The ascent soon steepens, with the trail following a rocky footpath through mountain laurel. In a short distance, the trail turns left onto a well-graded footpath, with stone steps. This beautiful new trail section was constructed in the spring of 2013 by the Jolly Rovers volunteer trail crew of the Trail Conference, together with AmeriCorps interns and professional trail builders. In about 600 feet, the trail climbs a long flight of narrow stone steps wedged between large rocks and turns right at a large boulder, switching back towards the west.

At the end of the relocated trail section, the Major Welch Trail turns left and begins to climb several rock outcrops surrounded by mountain laurel. It then climbs a long rock outcrop studded with pitch pines, which affords a panoramic north-facing view. Af 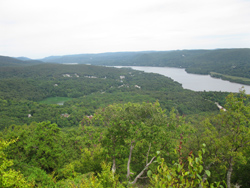 ter climbing a little further, the trail emerges onto another rock outcrop with an even broader view, including the Hudson River. Brooks Lake is visible directly ahead, and the Bear Mountain Bridge is on the right, with Anthony’s Nose behind it. This is a good place to take a break from the strenuous climb.

The trail continues ahead, briefly leveling off but soon resuming its ascent. Soon, you’ll climb stone steps and reach the paved Perkins Drive – an auto route to the top of Bear Mountain. Follow the trail as it crosses the road diagonally to the left, climbs stone steps, and continues to climb over more rock outcrops through mountain laurel.

After climbing another 150 vertical feet, you’ll reach a T-intersection with a well-graded gravel path. A blue-blazed trail begins on the right, but you should turn left to continue on the Major Welch Trail. This handicapped-accessible trail section, opened in 2011, was skillfully constructed by a team of experienced professional trail builders to blend into the environment while making it possible for all users to enjoy a hiking experience.

At the next intersection, turn left again, now joining the white-blazed Appalachian Trail, which runs concurrently with the Major Welch Trail, following a level path across the summit ridge of Bear Mountain. In 0.2 mile, you’ll pass a massive boulder on the left. Atop the boulder are the concrete foundations of a former fire tower (replaced in 1934 by the Perkins Memorial Tower). 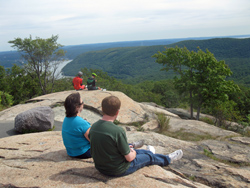 Just beyond, the trail crosses the paved loop road around the summit and reaches the Perkins Memorial Tower (the Major Welch Trail ends here). Built to honor the memory of George W. Perkins, the first President of the Palisades Interstate Park Commission, the tower contains informative exhibits. Continue past the tower, recrossing the paved loop road, and proceed ahead to a broad south-facing viewpoint, with Dunderberg Mountain jutting into the Hudson River to the left. Several rustic benches have been placed in this area for hikers to rest. After enjoying the view and taking a break, head back towards the tower, but bear right at a fork in the path. Directly ahead, on a rock, you’ll notice a plaque placed to commemorate the service of Joseph Bartha as Trails Chairman of the New York-New Jersey Trail Conference from 1940 to 1955. 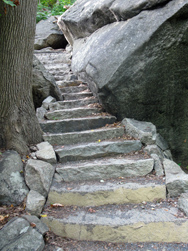 Bear right at the plaque and descend along the white-blazed Appalachian Trail. You now are following a spectacular trail section, opened in stages between 2010 and 2018, that was built over a 13-year period by professional trail builders and AmeriCorps trail crews, along with Trail Conference volunteers. By the time you reach the base of the mountain, you’ll have descended over 1,200 stone steps, supported in places by stone crib walls.

In about half a mile -- after having descended nearly 400 stone steps -- you'll reach a viewpoint on the right over Dunderberg Mountain to the southeast. Here, the trail bears left and levels off. It then climbs a little and crosses a stream channeled between two rock slabs.

A short distance beyond, the trail descends several long flights of stone steps and crosses an abandoned section of the Perkins Memorial Drive. The trail continues to descend through an area know as the Pine Flats. In another half mile, after passing a seasonal waterfall on the left, the trail curves to the left and reaches a panoramic viewpoint over Iona Island and the Hudson River. After descending a little further, it crosses a 28-foot-long wooden bridge and begins to descend more steeply on stone steps.

Towards the base of the descent, you’ll come to a junction where a blue-blazed side trail begins on the right. Bear left and continue to follow the white-blazed Appalachian Trail, which descends more gradually. Soon, you'll reach the "Trails for People" exhibit, which contains displays on the history of the Appalachian Trail and various methods of trail construction. Just beyond, you'll come to the trail junction behind the Bear Mountain Inn. Continue ahead past the Inn and retrace your steps to the parking area where the hike began. 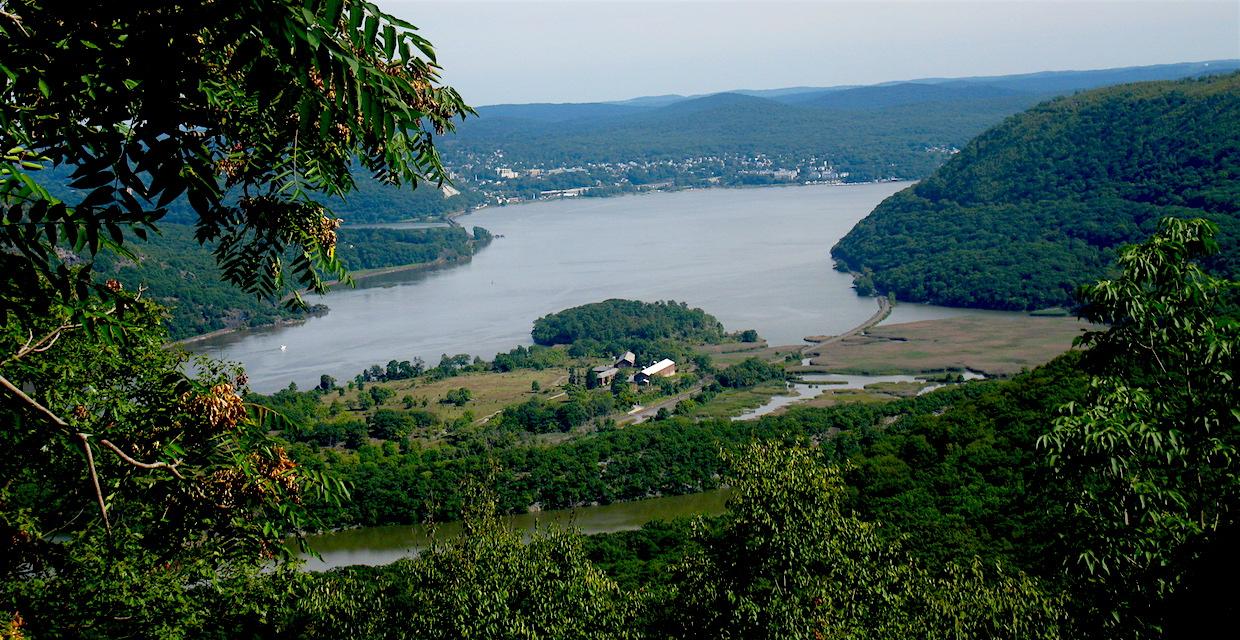 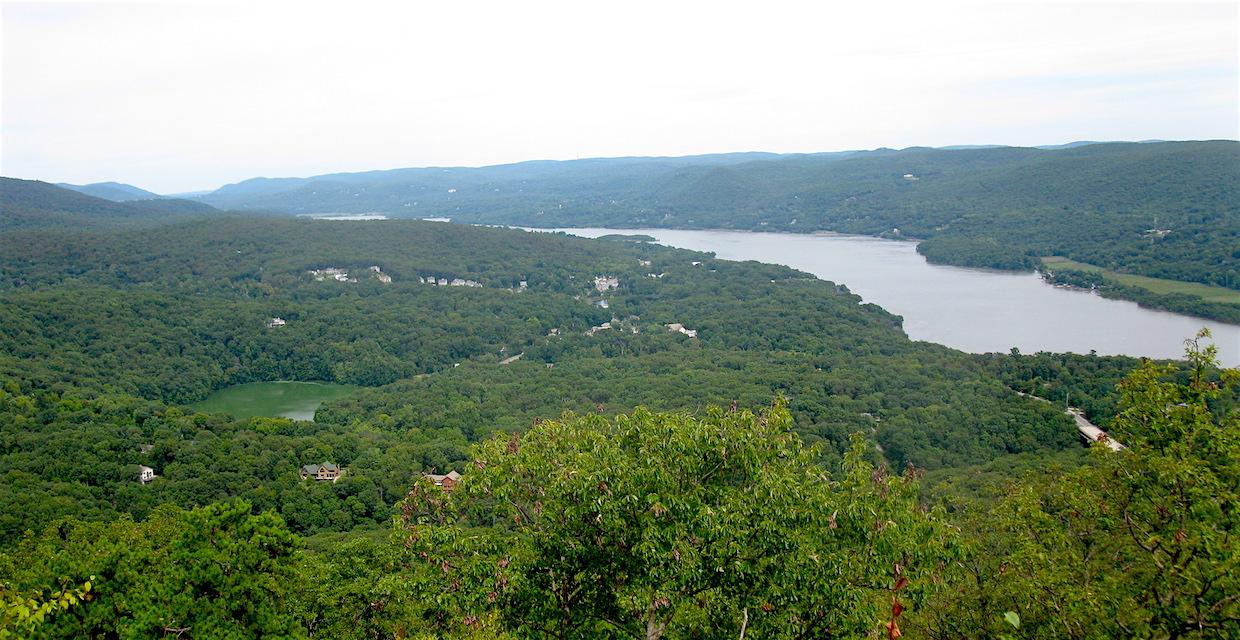 This loop hike climbs Bear Mountain on the Major Welch Trail and descends on the Appalachian Trail, passing a number of panoramic viewpoints.

Take the Palisades Interstate Parkway to its northern terminus at the Bear Mountain Circle. Proceed south on US 9W for 0.4 mile, then bear right at the traffic light and follow the ramp to the Bear Mountain Inn. Park in the large parking lot adjacent to the Inn. A parking fee is charged on weekends year-round, and daily from Memorial Day to Labor Day.

Take the Short Line bus from the Port Authority Bus Terminal in New York City to Bear Mountain.  For schedule and fare information, go to www.shortlinebus.com

rate experience
April 18, 2017
5
Awesome Hike!
What a pleasure. The very challenging ascent, the gorgeous Hudson River and mountain views and the spectacularly built AT section make this one of the region's very best hikes.
janete11en
September 18, 2016
0
Sept 2016 Hike
<p>My husband and I completed this hike in 2 1/2 hrs. Quite enjoyable. I'd say the first half is a bit strenuous but the trip down is not strenuous at all. Several pretty look-out points. Very popular trail - Lots of people, dogs, children on the trail.</p>
emilymaysmith
June 13, 2016
0
Great hike!
<p>Great descriptions above and a pretty well marked trail. A few hiccups on the vertical acesnt where you can't readily see a trail marker but not that big a deal. That 1.5 climb is no joke if your not in shape but me and the 12 year olds I was with had no problems. I wouldn't want to go up or down it if it was wet out though. Most of the rest of the trail is very very well maintained and an easy walk, especially on the back end on the AT trail with the hand hewn stone steps. The tower was nice also and the kids got to go to the top. It still aggrevates me though how some people still insist on littering!&nbsp;</p> <p>&nbsp;</p>
V_Cioni
More Reviews
Log in or register to post comments