The first part of the hike includes climbs totaling over 800 vertical feet over Black and Letterrock Mountains, but the remainder of the hike follows relatively level, little used trails.

From the kiosk at the southeast corner of the parking area, proceed south on the Horn Hill Loop Mountain Bike Trail, with blue-on-white diamond blazes. This pleasant, level trail (little used by bicycles) passes through a pine forest and crosses several bridges. In about half a mile, you'll reach an intersection with the white-blazed Appalachian Trail (A.T.), marked by a sign. Turn right, leaving the Bike Trail, and follow the white A.T. blazes, soon crossing a footbridge over Beechy Bottom Brook.

After climbing an embankment, you'll come to a junction with the red-dot-on-white-blazed Ramapo-Dunderberg (R-D) Trail. Turn right and follow the joint A.T./R-D, with both red-dot-on-white and white blazes. A short distance ahead, the trail descends wooden steps and crosses the Palisades Interstate Parkway - first the northbound lanes, then a wooded median strip, and finally the southbound lanes. The cars are traveling at high speeds, so use extreme caution!

The A.T./R-D now begins to climb Black Mountain, passing through an area with dense barberry thickets and crossing several old stone walls (signs that the land in this area was once farmed). At the top of a steep section of the climb, a cairn marks the intersection with the 1779 Trail (blue-on-white blazes). Continue ahead on the A.T./R-D, which descends briefly to cross a stream on rocks and then resumes a steady climb. For part of the way, the trail follows an improved route constructed by the Long Distance Trails Crew of the New York-New Jersey Trail Conference.

After a very steep climb over a rock outcrop, the trail emerges onto a viewpoint to the south and southeast. The AT&T relay towers just south of Route 106 may be seen directly ahead, with the Hudson River visible to the left. You'll want to take a short break here to rest from the climb. As you continue ahead along the summit ridge, there are views through the trees to the right (northeast) over Bear Mountain.

When you reach the highest point on the ridge, turn right and walk north for about 100 feet. Here you will see an open pit - a remnant of the Spanish Mine. Piles of tailings (waste rock that contains little or no iron ore) are visible adjacent to the pit. The history of this mine is the subject of much conjecture - one possible account is set forth in Ed Lenik's book Iron Mine Trails.

Continue ahead on the A.T./R-D, which descends steeply through a crevice in the rock and levels off along the south side of the ridge. After another rather steep descent over rocks and stone steps, you'll reach a panoramic viewpoint over Silvermine Lake from a rock ledge. The trail continues to descend until it crosses a small stream at the lowest point between Black and Letterrock Mountains.

Across the stream, you'll notice a well-built stone embankment that carries the Silvermine Ski Road, built by workers of the Temporary Emergency Relief Administration in 1934. After crossing this moss-covered road, the A.T./R-D begins a gradual climb of Letterrock Mountain. From a high point on the ridge, it descends through dense mountain laurel thickets, then traverses a few short ups and downs. After descending stone steps, the trail reaches the stone William Brien Memorial Shelter (built in 1933 as the Letterrock Shelter and renamed in 1957 in memory of Mr. Brien).

With the shelter on your right, turn left, leaving the A.T./R-D, and begin to follow the yellow-blazed Menomine Trail, which descends gently into a valley. After a while, the trail joins an old woods road, with a stream in a ravine below to the left. Since the road is badly eroded, portions of the trail have been rerouted to parallel the road.

The yellow trail ends at an intersection with the Red Cross Trail (red cross on white). Turn left onto the Red Cross Trail, crossing the stream on a wooden footbridge and continuing along another woods road. About 250 feet beyond the bridge, you'll notice a large barberry-covered depression to the left of the trail. This is the site of the "Burnt House" - reputed to have once been the home of woodcutter Jonas Lewis.

After passing a reed-filled marsh to the right, the trail bears left to parallel Stillwater Brook. In a short distance, it turns sharply right, crosses the wide brook on rocks (this crossing can be difficult if the water is high), proceeds through a wet area, and begins a gentle climb along the shoulder of Big Bog Mountain. You will soon hear the sounds of automobile traffic - a sign that you are once again approaching the Palisades Interstate Parkway.

When you reach the southbound lanes of Parkway, turn left and follow the road for 150 feet, then cross opposite the end of the guardrail and enter the woods on the median strip. At the northbound lanes, cross the road, turn left and follow the guardrail for 100 feet, then turn right at a Red Cross blaze on a tree and reenter the woods. Again, be sure to use extreme care when crossing this busy road!

In another third of a mile, you'll notice a cairn on the right side of the road. Here, the Bike Trail splits into two branches, and you should turn left, leaving the wide woods road and following a slightly rougher road (still the route of the Bike Trail), which descends to parallel a brook. After bearing right, away from the brook, the R-D Trail joins from the left.

When the R-D Trail turns right, continue ahead on the Bike Trail. A short distance ahead, you'll come to the intersection with the A.T. (marked by a sign) that you encountered earlier in the hike. Continue to follow the Bike Trail, now retracing your steps, until you reach the parking area where the hike began. 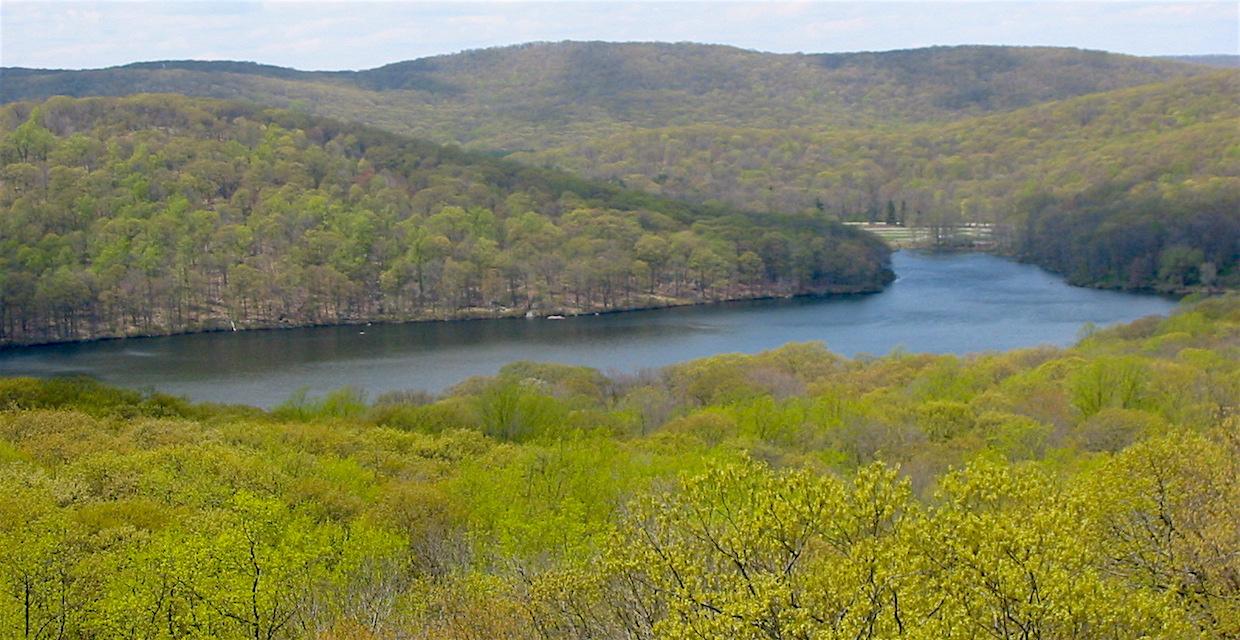 This loop hike climbs to the ridge of Black Mountain, with views over the Hudson River and the surrounding hills, and returns via lesser-used trails.

The first part of the hike includes climbs totaling over 800 vertical feet over Black and Letterrock Mountains, but the remainder of the hike follows relatively level, little used trails.

From the kiosk at the southeast corner of the parking area, proceed south on the Horn Hill Loop Mountain Bike Trail, with blue-on-white diamond blazes. This pleasant, level trail (little used by...

rate experience
October 21, 2017
0
Great Day
This was a beautiful day all around. The hike was perfect for a "direction challenged" person like myself. Lots of orientation points along the way. The autumnal light shining through the trees was magic. The hike has enough climbing, descent, and level walking to be challenging in parts and conducive to meandering thoughts (like where to stop to eat and other big life questions) in others. Somehow I turned this into a 12 mile hike as I ended up in the North Parking lot. It was toward the end on the bike trail that I got lost. Still, no step was begrudged. I loved the bridges and walls and the shelter. Has anyone slept over there? I sprinkled my husband's ashes in a few places that he would have loved. After the hike I drove to Nyack and took my 6 and 8 year old niece and nephew to their school Halloween party, me in an awesome gypsy costume. My cup runneth over!
Sheila F.
October 21, 2017
0
me too!
loved the hike, loved the day but also ended up in the North Parking lot! lol, that was the longest part for me...getting to my car.
Sheila F.
October 09, 2017
4
Beautiful hike!
Did this hike day before yesterday. It was a gorgeous day and I was glad we got to see some fall colors. The directions are pretty accurate and after reading them a couple of times, I was almost able to find my way pretty easily without a map. One tricky section is to get back on the Red Cross trail after crossing the Palisades Pkwy on the way back. You have to walk around a 100 ft after crossing the Pkwy before entering the woods again (it is easy to miss the red cross on the tree). Beautiful hike though! Very pretty views.
mallika1290
More Reviews
Log in or register to post comments