From the northwest end of the parking area, cross Skyline Drive and follow the yellow blazes of the Hoeferlin Memorial Trail, which curves to the north and parallels Skyline Drive. The trail steeply ascends a rock outcrop, then descends through mountain laurel. In 0.4 mile, the Cannonball Trail, marked by a white “C” on red, joins from the left, and both trails proceed north on a wide woods road.

In another half a mile, the trails cross a stream in a wet area and emerge from the woods near Skyline Drive, where they pass to the right of a fenced-in structure for a gas pipeline in an open area. Continue ahead, following the yellow and red trails as they pass through a barrier of concrete slabs, reenter the woods, and climb on switchbacks.

In another 0.4 mile, the red-on-white-blazed Matapan Rock Trail crosses. Turn left and follow this trail for about 500 feet to its end at Matapan Rock. This rock ledge, which directly overlooks Skyline Drive below, affords an expansive view to the west. 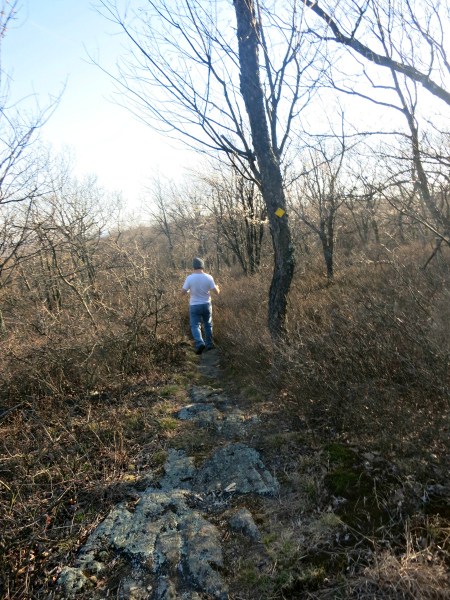 After resting here for a bit, retrace your steps to the main trail, turn left, and proceed north along the joint Hoeferlin/Cannonball Trail, which immediately crosses a wide gravel road (to the left, this road leads to a radio tower). The trails soon bear left, ascending to the ridgeline, and passing a large glacial erratic on the right. Upon reaching the ridgeline, the trails bear right onto a wide path and head north along the ridgeline, descending gradually.

A quarter mile beyond, the two trails split. Bear right and follow the white-on-red-blazed Cannonball Trail, which descends a little and soon begins to follow a secondary ridge, with a wetland below on the left. After traversing a boulder field, the Cannonball Trail is briefly joined by the green-tulip-tree-leaf-on-white-blazed Old Guard Trail. Just ahead, follow the Cannonball Trail as it bears left onto a woods road (here, the Old Guard Trail leaves to the right). You are now following the route of the historic Cannonball Road, reputed to have been used by the colonists during the Revolutionary War to transport munitions without being intercepted by the British.

A short distance beyond, you’ll notice a triple yellow-diamond blaze on the right. Turn right onto the Yellow Trail, which passes the camp’s Dogwood Cabin on the left and soon joins a woods road. It crosses a stream and then the route of a gas pipeline. After crossing another stream, it joins the orange-blazed Schuber Trail, which comes in from the left, and both trails begin a steady climb.

At the crest of the ridge, the trails bear right and head south. Soon, the green-tulip-tree-leaf-on-white Old Guard Trail begins on the right, but you should continue ahead, following the yellow and orange blazes. At the highest point on the ridge (elevation 996 feet), the orange-blazed Schuber Trail leaves to the right. Here, you should head left to a rock outcrop which offers an outstanding view over northern Bergen County, with the Manhattan skyline visible on the horizon to the right. This is a good place to take a break.

When you’re ready to continue, turn left and proceed south on the Yellow Trail, which now begins to descend. After passing a stone foundation on a rock ledge, the trail comes to a T-intersection with a woods road. Turn right onto the road, briefly joining the Yellow-Silver Trail, but, in 100 feet, bear left and continue to follow the yellow diamond blazes along a footpath. The Yellow Trail passes the stone foundations of some old Scout buildings, crosses a stream on a wooden footbridge, climbs to the crest of the rise, then descends steadily through a wooded valley. 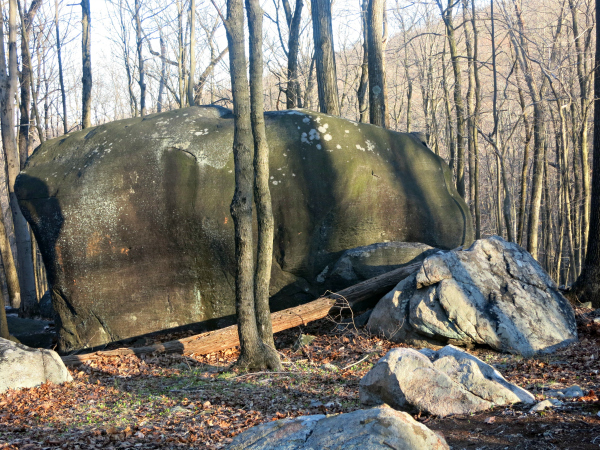 After passing a huge, flat-sided boulder, the trail turns right onto an old woods road and levels off. Soon, it reaches a junction with the white-blazed Millstone Trail. Turn left, now following both yellow and white blazes, and descend to cross two branches of Fox Brook on wooden bridges.

The trails now climb to cross paved Midvale Mountain Road, then continue to climb through the woods on a winding footpath. Soon, you’ll notice a millstone in nearly perfect condition to the left of the trail. This area was once the site of a millstone quarry, and the stones that you see were damaged during quarrying or abandoned when the quarry operation shut down. After climbing a little further, you’ll pass several more abandoned millstones in various stages of completion.

Just beyond, the white-blazed Millstone Trail goes off to the right, but you should proceed ahead, continuing to follow the Yellow Trail. The trail soon crosses a stone wall and begins a steady descent. On the way down, you can see the eastern ridge of the Ramapo Mountains through the trees, and the New York City skyscrapers may be visible on the horizon on a clear day. At the base of the descent, the trail crosses a stream on rocks (with an attractive cascade on the right), parallels another stream, then bears left to cross it.

The trail now climbs rather steeply. At the top of the rise, a municipal water tower may be seen just ahead. The trail now descends steeply and soon ends at a junction with the purple-on-white-blazed Tamarack Loop. Continue ahead (downhill), now following purple-on-white blazes. After passing cliffs on the left, the trail turns right, climbs a little, then descends towards Todd Lake. Soon, the trail reaches a stone wall on a rock ledge at water level, with a view over the lake, and continues to parallel the lake. Near the lake’s south end, the Tamarack Loop turns right, away from the lake. A short distance ahead, it reaches a woods road. This loop hike traverses a portion of the historic Cannonball Trail through the Ramapo Mountains and ascends to several viewpoints, with broad vistas both east and west

From the northwest end of the parking area, cross Skyline Drive and follow the yellow blazes of the Hoeferlin Memorial Trail, which curves to the north and parallels Skyline Drive. The trail steeply ascends a rock outcrop, then descends through mountain laurel. In 0.4 mile, the Cannonball Trail, marked by a white “C” on red, joins from the left, and both trails proceed north on a wide woods...

Take I-287 to Exit 57 (Skyline Drive) and proceed north on Skyline Drive for about one mile to the upper parking area for Ramapo Mountain State Forest on the left side of the road, opposite the entrance to Camp Tamarack.