From the parking area, walk south on Route 9W for a few hundred feet. Just beyond road signs for Routes 9W and 202, you’ll see three blue blazes and three red-dot-on-white blazes on a tree adjacent to the road. These blazes mark the start of the Timp-Torne (blue) and Ramapo-Dunderberg (red-dot-on-white) trails. You’ll be following the Timp-Torne Trail for the first part of the hike and returning on the Ramapo-Dunderberg Trail. 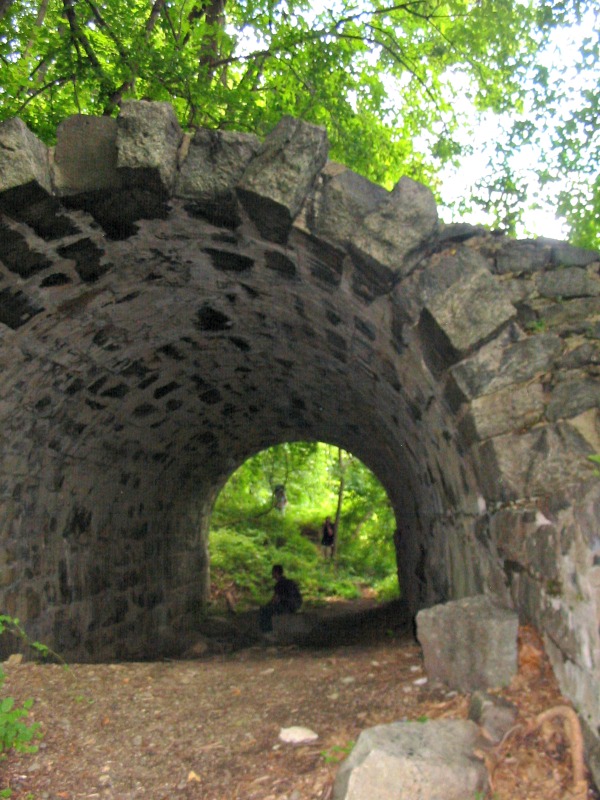 Follow the blue and red-dot-on-white blazes into the woods along a level footpath through an area of tangled vines. Soon, the trail will bear left and climb stone steps, and you’ll reach a stone-arch tunnel to the left. This tunnel is a remnant of the Dunderberg Spiral Railway, the construction of which commenced in 1890. The plan was to have the rail cars pulled up the mountain on a cable incline by a stationary steam engine, with the downhill journey being made by gravity. Large sums were spent on the project, two tunnels were partially completed, and much of the line was graded, but the promoters ran out of funds, and the railway was never finished. The tunnel you see on the left was designed to allow the ascending trains to pass over the route of the descending trains.

The trail now bears right and ascends more steeply on switchbacks and stone steps. At the top of the climb, you’ll reach a junction. Here, the red-dot-on-white blazes continue ahead, while the blue blazes turn left. Follow the blue blazes of the Timp-Torne Trail, which head southwest, parallel to the river. The trail continues to climb, but on a more moderate grade. Soon, views of the river appear through the trees.

In another ten minutes, the trail turns right and heads away from the river. After climbing a little, you’ll pass a rock outcrop on the left with two pitch pines that offers a view over the Hudson River. The trail continues through a rocky area and soon reaches a graded section of the railway. Follow the blue blazes as they turn left and continue along this level, graded embankment for the next quarter mile. 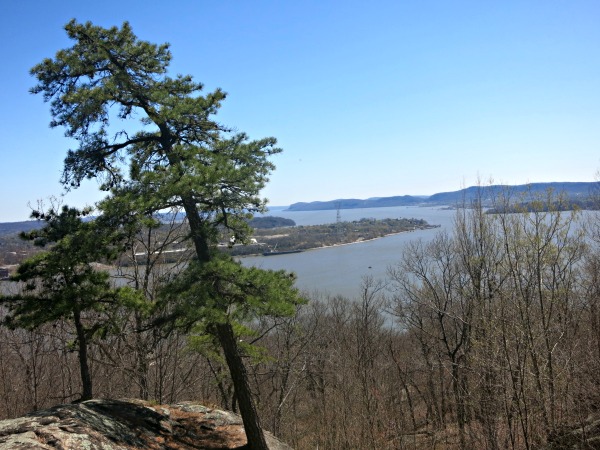 With the railbed ahead blocked off by fallen trees, the trail turns right and climbs to the next higher level, where it turns left. Just ahead you’ll come to the portal of an unfinished tunnel, intended for use by the descending trains. The tunnel, which has been excavated for about 75 feet, is often filled with water.

The trail now descends on a work road to the lower level of the graded railway, which it follows around a curved embankment, with views through the trees over the Hudson River. The curved roadbed ends at the opposite end of the uncompleted tunnel, but the trail bears left, crosses a stream and immediately reaches a woods road.

Turn right and follow this unmarked road, known as the Jones Trail, which was built in 1890 to enable workers on the Dunderberg Spiral Railway to reach higher levels of the railbed. The Jones Trail soon recrosses the stream and continues uphill through stands of mountain laurel.

In about a third of a mile, you’ll reach a junction with another grade of the railway. Bear left and continue along the unmarked railway grade. This section is particularly interesting, as it goes through a rock cut, follows a curved embankment, and continues through another rock cut. 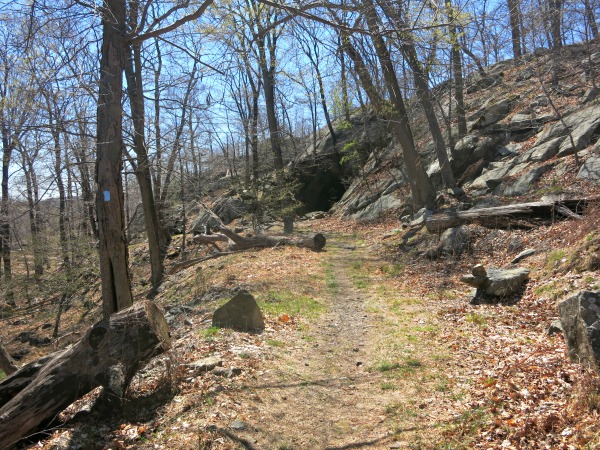 In a quarter mile, you’ll reach a T-intersection with the red-dot-on-white-blazed Ramapo-Dunderberg Trail. Turn right onto Ramapo-Dunderberg Trail, which climbs to a high point with a limited view. After a slight descent, it passes a small pond on the right and climbs steeply to reach a viewpoint over Bear Mountain. Continue along the ridge of Dunderberg Mountain, passing through thickets of dense birch saplings that are revegetating an area ravaged by a 1999 forest fire.

After descending from the ridge, steeply in places, you’ll notice a viewpoint from a rock outcrop just to the right of the trail, with Peekskill directly across the river. A short distance beyond, as the trail curves to the right, a short white-blazed trail leads ahead to another viewpoint. The trail soon joins another graded section of the railbed, with several gaps where the grading was never finished, and passes more views over the Hudson River.

At a stone abutment (built to carry the cars going up the mountain), the trail turns sharply left and descends steadily along the right-of-way of the cable incline. Be careful not to twist an ankle on the loose rocks as you descend. After about ten minutes, you’ll reach a junction with the blue-blazed Timp-Torne Trail. Continue ahead, following both blue and red-dot-on-white blazes back to the parking area where the hike began. This loop hike follows portions of the never-completed Dunderberg Spiral Railway and passes several expansive viewpoints over the Hudson River.

From the parking area, walk south on Route 9W for a few hundred feet. Just beyond road signs for Routes 9W and 202, you’ll see three blue blazes and three red-dot-on-white blazes on a tree adjacent to the road. These blazes mark the start of the Timp-Torne (blue) and Ramapo-Dunderberg (red-dot-on-white) trails. You’ll be following the Timp-Torne Trail for the first part of the hike and...

Take the Palisades Interstate Parkway to its northern terminus at the Bear Mountain Circle and proceed south on U.S. Route 9W for about four miles. At the base of a downhill section of the road, as the road reaches the river level, you’ll notice a large parking area on the right side of the road. (A side road, Old Ayers Road to Jones Point, leaves sharply to the left here.) Park in this gravel parking area.

rate experience
June 21, 2016
0
Great hike
<p>Your directions were spot on. A truly enjoyable hike.&nbsp;</p> <p>To see some more images of this hike:</p> <p>https://weekendwanderer2016.wordpress.com/2016/06/21/dunderberg-spiral-railway/</p>
CeeGee
October 13, 2015
0
You didn't do the loop that I described
<p>The hike description states (fifth and sixth paragraphs): &nbsp;"The curved roadbed ends at the opposite end of the uncompleted tunnel, but the trail bears left, crosses a stream and reaches a woods road. Turn right and follow this road, known as the Jones Trail." &nbsp;You're supposed to turn right, immediately after crossing the stream, onto an unmarked woods road (which is shown on Trail Conference Map 119 and labeled as the Jones Trail). Instead, you continued for another mile and a half on the Timp-Torne Trail and then turned right onto the 1777 Trail. &nbsp;The longer loop that you actually did is described on our website (in the opposite direction) as a separate hike: www.nynjtc.org/hike/dunderberg-spiral-railwaybald-mountain-loop , and it is indeed about 6.8 miles long.</p>
Daniel Chazin
October 12, 2015
0
Did I do the correct loop?
<p>My son and I just did the loop above (or at least i think we did). &nbsp;We entered on Ramapo trail, turned left on Timp-Torne, &nbsp;cut over at the 77 trail (which based on it being the only crossover trail connecting Ramapo and Timp, i assumed it was that jones trail the description discussed). &nbsp;Then we looped back on the Ramapo trail. &nbsp;It was 6.8 miles, and extremely difficult terrain. We did the Breakneck Ridge trail and this was at least as difficult, especially on the way down. &nbsp;The ground was all medium sized loose rocks (for like 1/2 of the descent at least) and the descent was very steep . &nbsp;Not only did it do a number on my knees, but it was rough even for my teenage son who is extremely fit. &nbsp;<br><br>The info above says 3.9 miles and I mapped it at 6.8 miles (using map my hike app). &nbsp;Did i do the correct loop, or did I misunderstand?</p>
BJB
More Reviews
Log in or register to post comments