From the northern end of the parking area, proceed north on the white-blazed Washburn Trail. In 100 feet, you’ll reach a junction with the blue-blazed Cornish Trail, which continues straight ahead. The Cornish Trail will be your return route, but for now, bear right and continue to follow the Washburn Trail uphill along an old road, once used to access a quarry.

In about half a mile, you’ll reach the site of the quarry, opened in 1931 by the Hudson River Stone Corporation and abandoned in 1967. The quarry site is now overgrown with trees, although the scars in the rock are plainly visible on the left. Here, the trail leaves the road, veers sharply right, and follows the rim of the quarry. You’ll notice some rusted pipes and cables along the trail, remnants of former quarrying operations.

The trail soon bears right, leaving the quarry rim, and begins a steep ascent of Bull Hill, with views to the right over the Hudson River. The best viewpoint is from a rock outcrop at the point of a switchback (after a short level stretch), about 30 feet to the right of the trail. Crows Nest Mountain is visible across the river, with Cold Spring directly below and Constitution Island to its south. You’ll want to stop here to rest from the steep climb and enjoy the spectacular view.

Past the viewpoint, the trail continues to ascend more gradually. After climbing another 400 vertical feet, it comes out on open rocks, with views over the Hudson River to the west and south. Crows Nest Mountain is directly across the river, and the United States Military Academy at West Point is prominent in the distance to the south. After a short level section, the trail resumes a rather steep climb.

About 1.2 miles from the start, the Washburn Trail crosses the yellow-blazed Undercliff Trail. Continue along the Washburn Trail, which dips slightly and then resumes a steady climb. In another 15 minutes, you’ll reach a rock outcrop just to the left of the trail that offers a broad view over the Hudson River. Just north of the sharp bend in the river -- of great strategic importance during the Revolutionary War –- is Constitution Island, and beyond the bend is the United States Military Academy at West Point. On a clear day, you can see the Bear Mountain Bridge down the river in the distance. You’re not quite yet at the summit, but this is another good place to take a break.

Continue ahead, now climbing more gradually, and soon you’ll reach the viewless summit of Bull Hill (also known as Mt. Taurus). Here, the trail begins to follow an old carriage road that descends the northeast slope of the mountain. Soon, you’ll reach a T-intersection, where the trail turns sharply left (the path to the right leads to a south-facing viewpoint). Just beyond the intersection, the trail reaches a panoramic viewpoint from a rock outcrop on the left, with the Hudson River visible below to the left. The imposing ridge extending northeast from the river is Breakneck Ridge, with the Newburgh-Beacon Bridge visible through a low point in the ridge. To the right, you can see the fire tower on South Beacon Mountain, the highest point in the East Hudson Highlands. In the distance to the left, the Shawangunk Mountains -– and beyond them, the Catskills -– may be seen on a clear day.

The Notch Trail descends steadily on a rocky, eroded footpath. After crossing a stream, it levels off and soon crosses a deeply eroded section of a woods road. Here, it turns sharply left, briefly parallels the road, then joins it. The trail continues along the road, which soon resumes a gradual descent, for about three-quarters of a mile, paralleling streams, first on the right, then on the left.

After passing a stone foundation on the left, the Notch Trail reaches Breakneck Brook. Here, the Notch Trail turns right, but you should turn left onto the red-blazed Brook Trail. (You may wish to take a short detour to visit the concrete-and-stone ruins of the Cornish dairy farm, visible on the right through the trees. If so, turn right and continue for a short distance on the blue-blazed Notch Trail, which leads to the ruins, then retrace your steps and return to the junction.)

Continue south on the red-blazed Brook Trail, which follows a footpath along Breakneck Brook. In another quarter of a mile, you’ll reach an intersection with the yellow-blazed Undercliff Trail, which joins briefly. Just ahead, the Undercliff Trail leaves to the right, crossing a bridge over the brook, but you should continue ahead along the red-blazed Brook Trail, which follows an eroded carriage road along the brook.

After passing a small abandoned concrete building and an old concrete dam on the right, you’ll come to a fork. Bear left here onto the blue-blazed Cornish Trail, which follows an old road through the former estate of Edward G. Cornish, who served as Chairman of the Board of the National Lead Company.

The road passes a large cement-and-stone cistern on the right, then curves around two switchbacks and continues with a concrete pavement. Soon, the stone ruins of the Cornish mansion are visible below to the right (a side road leads down to the ruins). The paved road descends steadily towards Route 9D, where it ends at a gate. Just before the gate, the Cornish Trail turns left, crosses a wet area on rocks and stumps, and continues along a footpath parallel to Route 9D for about a quarter of a mile to end just before the parking area where the hike began. 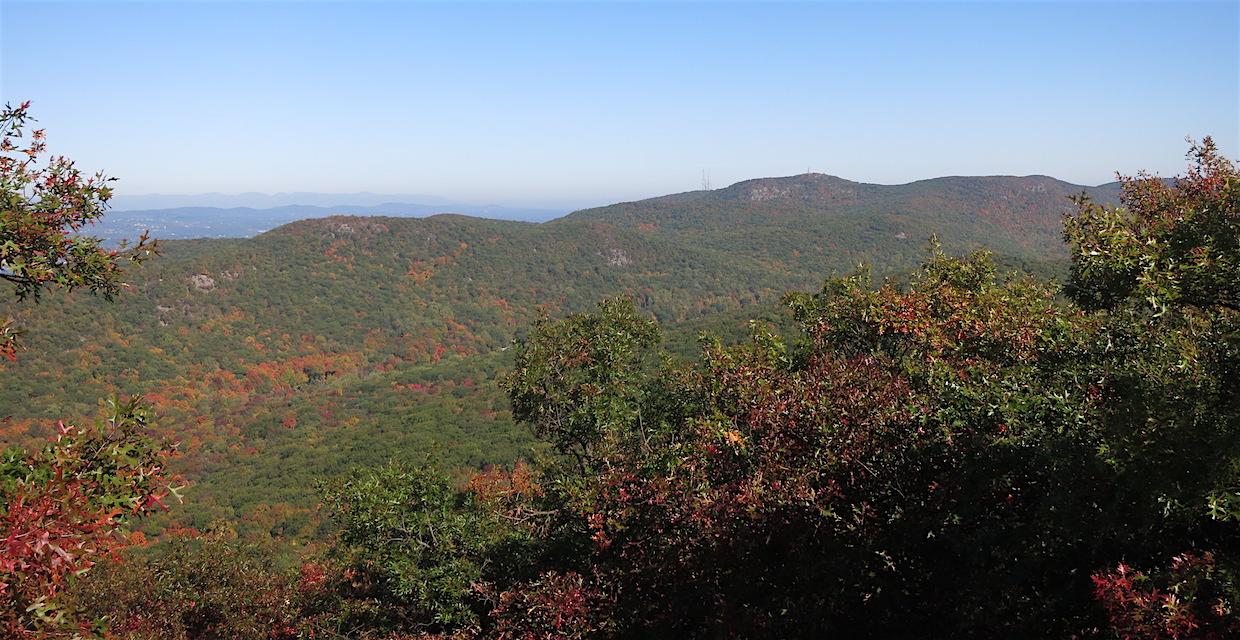 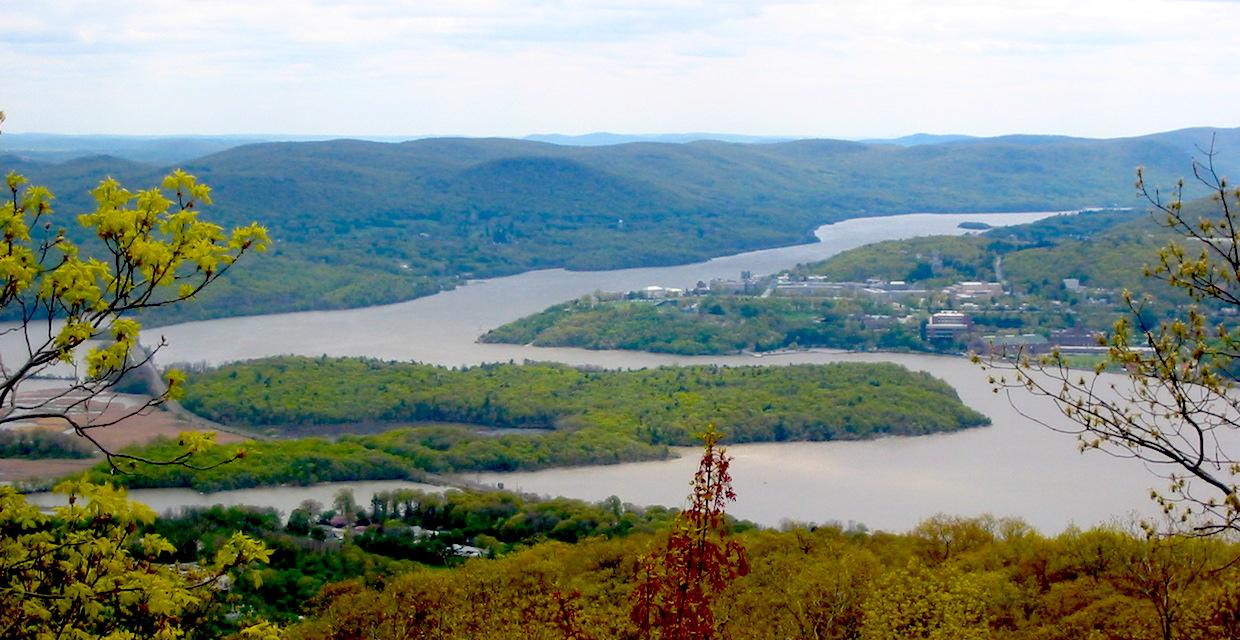 This loop hike steeply climbs Bull Hill, with many spectacular views over the Hudson River.

From the northern end of the parking area, proceed north on the white-blazed Washburn Trail. In 100 feet, you’ll reach a junction with the blue-blazed Cornish Trail, which continues straight ahead. The Cornish Trail will be your return route, but for now, bear right and continue to follow the Washburn Trail uphill along an old road, once used to access a quarry.

Take the Palisades Interstate Parkway to its northern terminus at the Bear Mountain Bridge. Cross the bridge and proceed north on N.Y. Route 9D for about 8.5 miles to its intersection with N.Y. Route 301 (Main Street) in the Village of Cold Spring. Continue ahead on Route 9D for another 0.7 mile past the intersection with Route 301 to a parking area on the right side of the road, opposite the entrance to Little Stony Point.

Take the Metro-North Hudson Line to the Cold Spring station, and walk north on Fair Street and Route 9D to the trailhead.

rate experience
December 08, 2016
4
Great hike
Very challenging hike up the Washburn Trail, but I truly enjoyed it. The rest of the hike is easy once you tackle the summit. For a virtual tour of this hike, please click here: https://scenesfromthetrail.com/2016/12/03/bull-hill-and-cornish-estate-ruins/
CeeGee
November 09, 2013
0
A super autumn hike
<p>This is an excellent outing for the fall, when tempuratures are cool and views are improved after the leaves fall. Conditions were excellent for my day hike in early November 2013. My GPS reads 7.3 miles (11.8 km) round trip from the Metro North Station at Cold Spring.</p>
stevenmleslie
April 28, 2013
0
Great views and easy to get to by train
<p>Great hike - nice to actually stretch the legs - and fantastic views. I took the first train from NYC to Cold Spring - highly recommended as the trail seems to get busy. Cold Spring is a very cute town, but became a bit over-run with tourist-y types (myself included) later in the afternoon. The first train left Grand Central at 6:44am (Saturday) and cost $26 return. I was there by 8am, at the top just after 9am, and back down by 11 or so - wishing I'd had a longer nap at the top! Fantastic views overlooking the hills. Hourly trains to bring you back to NY.</p>
sjriley
More Reviews
Log in or register to post comments