From the parking area, head north into a field, following a blue-blazed trail which curves to the right, with blazed posts marking the route. At the eastern edge of the field, the trail climbs into the woods, soon reaching a woods road. Follow the blue-blazed trail as it turns right onto the woods road, which ascends gradually and then levels off. Soon, you’ll reach a viewpoint to the northwest over Storm King Mountain, the United States Military Academy at West Point, and the East Hudson Highlands.

Just beyond, the blue-blazed trail ends at a junction with the red-blazed Sugarloaf Trail, which comes in from the right. A rustic gazebo is on the left. Continue ahead on the woods road, now following the red blazes of the Sugarloaf Trail. Just ahead, you’ll reach a second northwest-facing viewpoint, with even better views.

After crossing a stream on rocks, the trail turns sharply left and ascends on another woods road. It parallels a ravine on the left, with many fallen trees, then turns right and levels off. The trail now proceeds through an area that was devastated by severe localized storms on May 15, 2018. It curves to the right and climbs gradually, soon reaching a panoramic northwest-facing viewpoint (which was created as a result of the damage inflicted by the May 2018 storm). The trail switches back to the left, passes a pond on the left, and reaches a trail junction in the broad saddle between Castle Rock and Sugarloaf Hill.

Turn right here, and continue to follow the red blazes, which now mark a footpath that steeply climbs to the summit of Sugarloaf Hill. Just beyond the crest of the rise, you’ll pass another viewpoint across the river that was created by the May 2018 storm. After crossing the summit ridge, the trail descends a little and ends at a rock outcrop, with a magnificent view to the south over the Hudson River and the Bear Mountain Bridge.

After enjoying the view, retrace your steps and return to the trail junction in the saddle. Now proceed straight ahead on the blue-blazed Osborn Loop Trail. Named after a prominent family in the area who donated the land traversed by the trail, the Osborn Loop Trail follows carriage roads of the former estate. The trail climbs gently and, after passing a small pond on the right and a gazebo on the left, reaches a junction with the yellow-blazed Carriage Connector Trail. Continue ahead on the blue-blazed trail, which soon resumes its climb, passing through thick stands of mountain laurel. After leveling off, the Osborn Loop Trail ends a junction with the white-blazed Appalachian Trail (A.T.).

Proceed straight ahead on the carriage road, now following the white blazes of the A.T. on a relatively level route. In about a mile, the yellow-blazed Curry Pond Trail leaves to the right. Continue ahead on the white-blazed A.T., which soon begins to descend. After bearing sharply right at a junction with another woods road, the A.T. reaches the southern end of the Osborn Loop Trail. The A.T. turns left here, but you should continue ahead, now once again following the blue blazes of the Osborn Loop Trail.

In about half a mile, you’ll notice a large cairn on the left which marks a yellow-blazed trail that leads to Manitoga. Continue ahead on the blue-blazed trail, which soon crosses a stream and reaches (on the right) the western end of the yellow-blazed Curry Pond Trail. Just beyond, on the left, an unmarked woods road heads downhill to Manitoga, but you should continue ahead on the Osborn Loop Trail. A short distance ahead, follow the trail as it turns right, leaving the carriage road, and descends to cross a stream on large rocks. It continues along the side of Canada Hill and, after crossing a few more streams, bears left and begins to ascend. Soon, the climb moderates as the trail parallels an old stone wall on the left. At the top of the climb, the trail bears right, with views to the left through the trees over the Hudson River.

Follow the blue-blazed trail as it descends from the crest of the ridge, first gently, then more steeply, paralleling a stream. At the base of the descent, the Osborn Loop Trail turns right onto a woods road. It briefly climbs, then continues to descend more gradually through mountain laurel and hemlocks. After passing through an area devastated by the May 2018 storms, the trail crosses a stream and climbs gently to reach a junction with the red-blazed Sugarloaf Trail, which is ahead and to the left.

Continue straight ahead at the junction and descend on the red-blazed Sugarloaf Trail. You’re now retracing the route you followed at the start of the hike. When you reach the gazebo at the edge of the field, turn left, descend across the field on the red-blazed trail, and follow woods roads back to the parking area where the hike began. 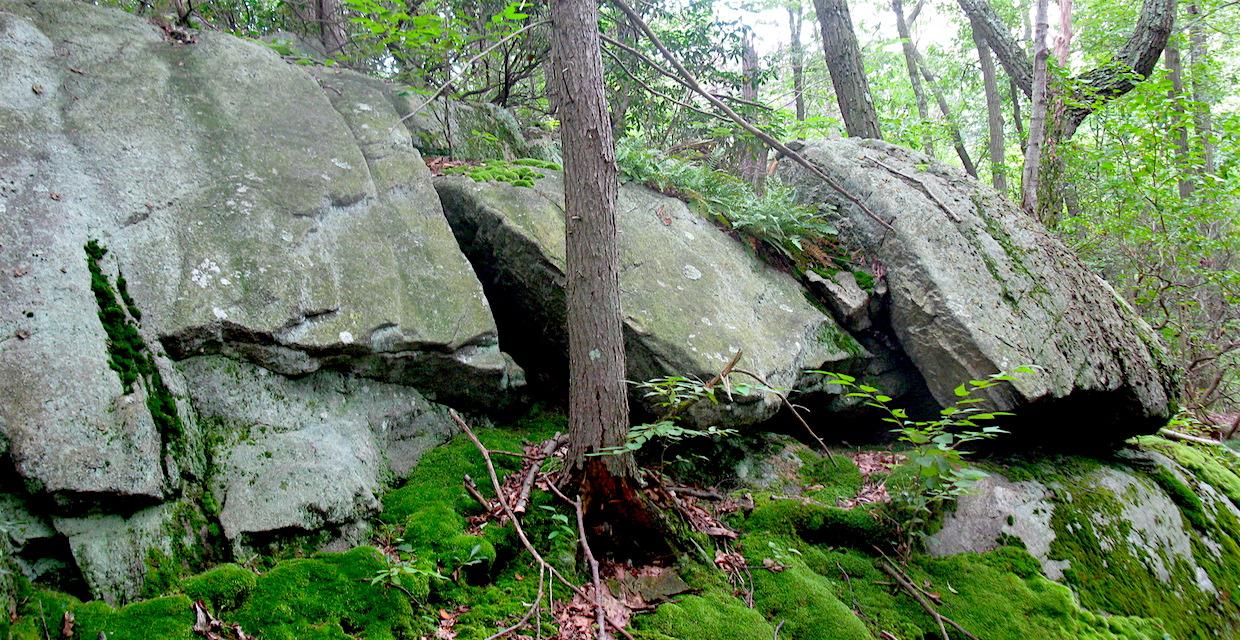 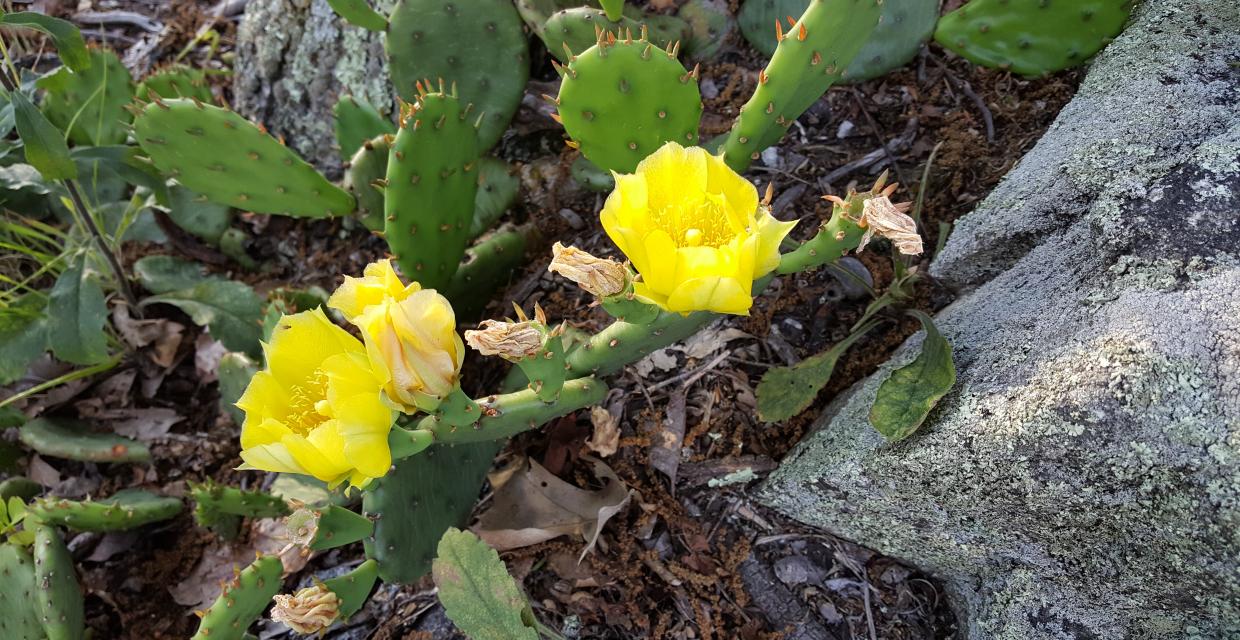 This loop hike follows carriage roads of a former estate and climbs to an outstanding viewpoint over the Hudson River and the Bear Mountain Bridge.

From the parking area, head north into a field, following a blue-blazed trail which curves to the right, with blazed posts marking the route. At the eastern edge of the field, the trail climbs into the woods, soon reaching a woods road. Follow the blue-blazed trail as it turns right onto the woods road, which ascends gradually and then levels off. Soon, you’ll reach a viewpoint to the...

From the east end of the Bear Mountain Bridge, proceed north on N.Y. Route 9D for about 4 miles. Look carefully on the right side of the road for a wooden sign "Castle Rock Unique Area." The intersection is also marked by a street sign "Wing and Wing Road." (If you reach the junction of N.Y. Route 403, you've gone too far.) Turn right at the Castle Rock Unique Area sign, passing between two stone pillars, and bear left at the fork in the road. Continue past a red barn on the right to a gravel parking area.

Take the Metro-North Hudson Line to the Garrison station.  A trail leads from the southern end of the parking lot to the trailhead of the hike (see Map 101).

rate experience
May 12, 2019
5
Great Hike! Perfect description
Did this hike today with three friends. It's a really great long hike with some beautiful ponds, streams, outlooks and dramatic fallen trees and remnants from the storm last year. It was a bit muddy at times, but you can make your way around it. The trail instructions here were spot-on and very helpful as there are many junctions and different trails intersecting. Also, as someone else posted about getting from Garrison train station to the trailhead; once you get up to Garrison Institute just keep going around the building and through their parking lot to 9D and you'll see the entrance across the street! Thanks so much for great trail instructions!!
atopping
April 01, 2019
0
Hike and mileage have been updated
<p>Thank you for your comment on my hike.&nbsp; You are indeed correct that the hike is significantly longer than 7 miles.&nbsp; Trail Conference Map 101, which now contains mileages on the face of the map, indicates that the hike is actually 8.2 miles long, and I have changed the hike mileage accordingly.&nbsp; I have also updated the hike description with information regarding the devastation caused by the severe storms in May 2018.</p>
Daniel Chazin
March 31, 2019
4
More Like 8.5 Miles
This was a great hike with views that offered enough challenge to both a seasoned hiker and a fit novice. However, the total mileage that we ended up with was 8.5 miles, not 7. Not sure if we somehow misread the directions here, but we were a bit surprised by the additional time we were out on the trail. We wondered if the devastation evident from the tornadoes that cut through this part of Putnam County in May 2018 may have caused some re-routing, resulting in a longer hike? No matter. Few other hikers were seen on an unseasonably warm spring Saturday, so this is a nice break from the often over-crowded hikes nearby, e.g., Breakneck.
jmtoconnor
More Reviews
Log in or register to post comments