Lord Stirling Park is named for William Alexander, Lord Stirling, a general in the Revolutionary War, whose estate included this area. It is situated on a portion of the former Glacial Lake Passaic, which covered the area about 15,000 years ago. As a result, the entire area of the park is nearly level. During wet periods, sections of the trails can be very wet, so it is a good idea to wear waterproof hiking boots. 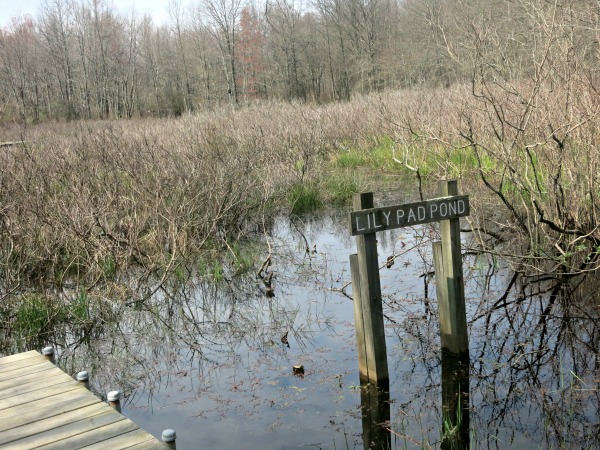 From the parking lot, walk to the right of the Environmental Education Center and bear right, following the sign for “hiking trail.” Continue ahead on a gravel path, with Branta Pond on the left and Esox Pond on the right. When you reach the end of Branta Pond, turn right onto a wide grassy path, the route of the Yellow Trail.

Bear right at the next intersection, soon reaching a short side trail on the right that leads to a floating dock overlooking Esox Pond. Turn right at the following intersection and then immediately bear left, still following the yellow blazes. Just ahead, on the left, is the East Observation Blind, which overlooks a wetland known as Lily Pad Pond.

After passing the pond on the left, continue to follow the Yellow Trail as it turns right onto another path that heads east. The trail soon approaches the Passaic River and turns north, paralleling the river. It approaches the river once more (at an interpretive sign) and crosses the June Beetle Bridge, then curves left, away from the river.

At the next intersection, turn right and then, in 100 feet, bear right again. Soon, you’ll begin to follow along the edge of the Lenape Meadow on the left. A short distance beyond, a short boardwalk on the right leads to the East Observation Tower, which offers a view over the Passaic River. 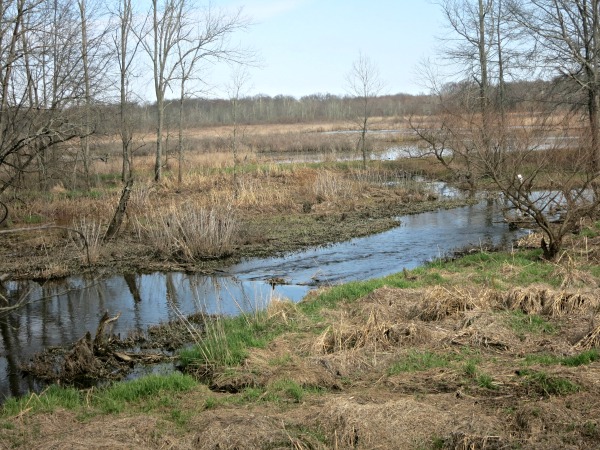 After enjoying the view, return to the trail and turn right, following the wide grassy path along the edge of the meadow. At the end of the meadow, bear right at a T-intersection onto a green-blazed trail. In another 200 feet, a boardwalk begins on the left, but you should continue straight ahead.

After proceeding for a quarter mile through a wooded area, the trail begins to follow a long stretch of boardwalk. At the next intersection, bear right and continue along the boardwalk as it meanders through the East Marsh, a swampy area with a number of trees. At one point, the boardwalk approaches the Passaic River, with a short spur leading out to a viewpoint over the river (this location is shown on the park map as "The Dance Floor"). Across the river is the Great Swamp National Wildlife Refuge. After taking in the view, return to the main boardwalk and bear right.

At the next intersection, bear right onto an 0.7-mile-long loop, nicknamed the "Boondocks Boardwalk" after the isolated area that it goes through. This boardwalk was severely damaged during Hurricane Sandy in 2012, but it has since been rebuilt. After traversing a winding section of boardwalk, the trail bears right and continues along a newly rebuilt section with railings on both sides. This trail section traverses La Plus Grande – the most interesting wetland in the park. Towards the end of La Plus Grande, a short side trail leads to a open platform with benches and a plaque honoring those who contributed to the reconstruction of the boardwalk

A short distance beyond, the railings end and the boardwalk continues through the woods. After traversing a long section of boardwalk through woodlands, you’ll come to a triangular junction of boardwalk. Bear right (following the sign "EEC 0.89 mi.") and head south. Do not turn right at the next junction, but proceed straight ahead. When the boardwalk ends, continue ahead on a wide gravel path..

In another 100 feet, you’ll reach a T-intersection. Turn left, now following the Red Trail, which will lead you all the way back to the Environmental Education Center. You should bear right at the next two intersections, and then make a left followed by a right. After passing a deer exclosure on the right, you’ll cross the Backswimmer Bridge over a stream. Bear left just beyond, and cross the Aphid Bridge. After going around a bend in the trail, the Environmental Education Center will be visible ahead through the trees, across Branta Pond. Bear right at the next intersection onto the path on which you began the hike, and proceed back to the center and the parking lot. 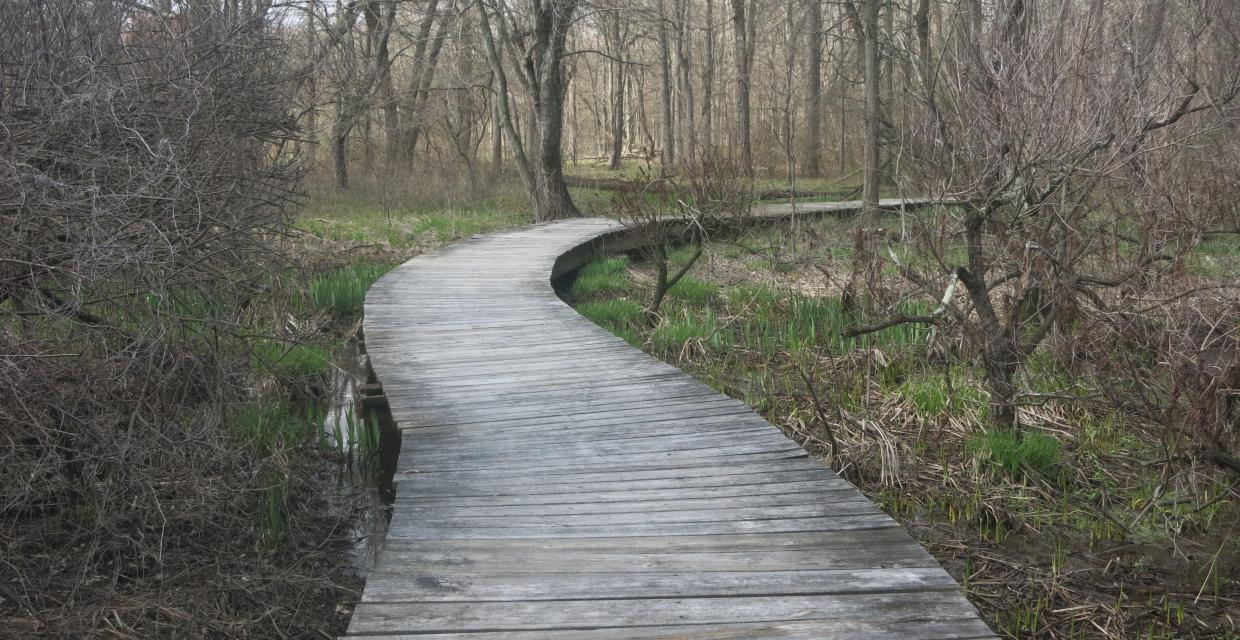 This relatively level hike passes through lowland forest, runs alongside a river, and crosses swamplands on boardwalks.

Lord Stirling Park is named for William Alexander, Lord Stirling, a general in the Revolutionary War, whose estate included this area. It is situated on a portion of the former Glacial Lake Passaic, which covered the area about 15,000 years ago. As a result, the entire area of the park is nearly level. During wet periods, sections of the trails can be very wet, so it is a good idea to wear...