From the kiosk, continue ahead (southwest) for 100 feet on the gravel road, then turn left onto another gravel road and pass between two metal gateposts. You’re now following the route of the orange-blazed Hibernia Brook Trail. In another 100 feet (before reaching a locked gate), follow the orange-blazed trail as it turns right, leaving the gravel road, and enters the woods on a footpath. The trail proceeds through a deciduous forest with an understory of blueberry bushes. After a level stretch, the trail climbs to reach an exposed bedrock slab with glacial striations, and then descends. On the way down, it passes a rail with a pointed tip embedded in the ground to the left of the trail. This unusual feature once served as a boundary marker.

After passing through a valley, the trail climbs rather steeply, levels off, and crosses a woods road. It continues on a level footpath, then climbs a little to reach a T-intersection with a woods road. Follow the orange-blazed trail as it turns right onto the road. In 125 feet, you’ll reach a junction with the white-blazed Four Birds Trail. You’ll be heading north on this trail, but for now, continue ahead on the orange-blazed trail for 500 feet to the Hawk Watch -– an open rock ledge that provides a panoramic view over the Rockaway Valley below. During the fall and spring migratory seasons, volunteers record the numbers of migratory birds observed here. On a clear day, portions of the New York City skyline can be seen on the horizon to the left.

Even if you’re not a hawk-watcher, you’ll want to spend some time at this beautiful location. When you’re ready to continue, retrace your steps to the white-blazed Four Birds Trail and turn right, now heading north. The trail immediately crosses a gravel road (which, to the right, leads to a television transmission tower) and begins a long, steady descent. In half a mile, at the base of the descent, the trail traverses a rocky area, crosses a stream on a wooden footbridge, and begins a steady climb.

In another quarter of a mile, you’ll reach a junction with the red-blazed Beaver Pond Trail, which begins on the left (the triple-blaze marking the start of the trail is about 50 feet from the junction). Turn left and follow the Beaver Pond Trail, which climbs gradually. At the crest of the rise, a short side trail on the left leads to an interesting split rock, with a south-facing view through the trees during leaf-off season. The tower on the ridge ahead is the television transmission tower just north of the Hawk Watch.

The trail now descends slightly to reach the large Beaver Pond (which may be covered with water lilies in the summer). A beaver lodge may be seen directly ahead, with two abandoned telephone poles incongruously sticking out of the water. Here, the trail turns left and follows along the southern shore of the pond. Beyond the pond, the trail widens to a gravel road. After passing an abandoned stone building – a crusher from the Willis Mine that was once active here – the Beaver Pond Trail ends at a locked gate.

Continue ahead along the left side of the large, open gravel area. When you reach the gravel Upper Hibernia Road, you’ll notice a sign on the left marking the continuation of the yellow-blazed Wildcat Ridge Trail. Turn left and follow this trail into the woods. Soon, the trail begins to run along a mining berm that parallels a ditch (the ditch once carried a pipe that supplied compressed air to the mines).

After moving away from the berm, the yellow-blazed trail ends at a gravel road. Turn right onto the gravel road, then right again at the next intersection to return to the parking area where the hike began. 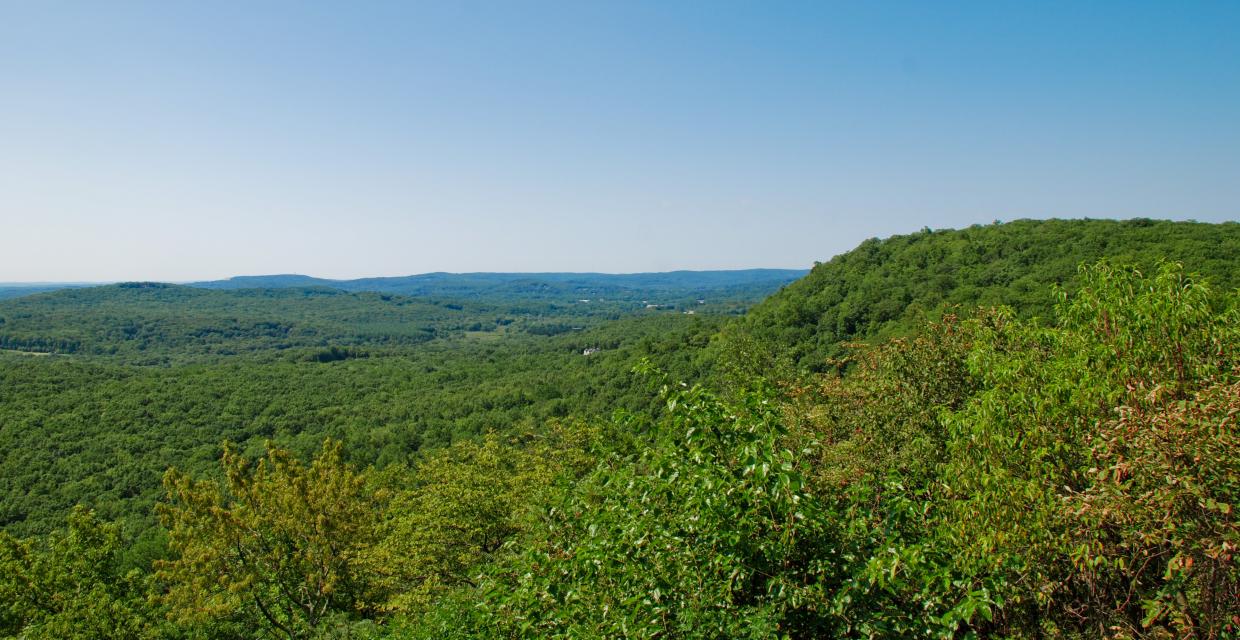 This loop hike in the Farny Highlands climbs to a panoramic viewpoint over the Rockaway Valley from the Hawk Watch and goes by an interesting beaver pond.

Take I-80 to Exit 37 (Hibernia/Rockaway) and bear left at the end of the ramp. Continue north on Green Pond Road (County Route 513) for 6.5 miles and turn right onto Upper Hibernia Road. (If coming from the north, you can take N.J. Route 23 to Green Pond Road, head south for 5.3 miles, and turn left onto Upper Hibernia Road.) In 2.5 miles, the paving ends. Continue ahead on the gravel road for another 0.2 mile to a large gravel parking area, with a kiosk for the Wildcat Mountain WMA on the left.

rate experience
April 16, 2018
0
Mileage checked, between 2.4-2.5 miles
<p>Glad you enjoyed the hike!&nbsp; I haven't been up to the Hawk Watch in a few years, but it's a neat area for sure.</p> <p>I checked the mileage for this particular hike, and it is about 2.4-2.5 miles based on our accurate GIS-based track of the route.&nbsp; A straight-line measurement of the trails is about 2.4 miles, but an additional 0.1 mile can be added to account for elevation and fine trail wiggles that might not be captured by the track.</p> <p>I'm not sure how you arrived at a mileage of 3.25 miles, but since you indicate you followed this hike exactly, my guess is the track mileage from your GPS unit or phone may have been too high.&nbsp; Often, GPS readings can be fairly reliable, but there can be times where they are not quite correct due to a variety of potential errors.&nbsp; A GPS distance can sometimes differ based on type of device, the collection interval on the device, or even within different apps in a smartphone device.&nbsp; Other errors can also creep in, such as poor GPS satellite configurations and GPS wandering if you are stationary for a while (such as if you were at the Hawk Watch for an extended period of time).</p> <div class="views-field views-field-comment-body"> <div class="field-content"> <p>~Jeremy, TC Cartographer</p> </div> </div>
Jeremy Apgar
April 14, 2018
4
Mileage incorrect
Great hike. Note that mileage is actually 3.25 mi following the directions here exactly.
erik3
August 15, 2016
0
Hike description has been updated
<p>I rehiked this hike today. &nbsp;I, too, had trouble finding the trailhead, and I agree that description needed to be clarified. &nbsp;I have now updated the description, and I think that the revised description makes it easy to find the trailhead. &nbsp;The yellow trail has indeed been reblazed, and I have incorporated this trail into the hike.</p>
Daniel Chazin
More Reviews
Log in or register to post comments