The Apshawa Preserve is a rugged 576-acre tract owned by Passaic County and the New Jersey Conservation Foundation. About seven miles of trails traverse the preserve, and this hike features the trails in the southern section of the preserve. The trails are marked with paint blazes and with colored plastic diamond blazes that incorporate the logo of the New Jersey Conservation Foundation.

At the northern end of the parking area, go through a gate in a deer fence and follow the Blue Trail, which first proceeds along a woods road, but continues on a footpath. After crossing a wet area on puncheons, the Blue Trail bears left and descends to cross a stream on a wooden footbridge. It then climbs a hill on a woods road, passing on the left the start of the Purple Trail. Continue ahead on the Blue Trail, which bears right at a high point and passes interesting rock formations on the left. Just beyond, the trail turns left, leaving the woods road, climbs over a rise and descends steeply into a ravine, where it turns left onto another woods road.

A short distance ahead, the White Trail begins on the right, but you should continue on the Blue Trail, which follows a relatively level woods road. After looping around a vernal pond, you’ll pass the start of the Orange Trail on the left. This will be your return route, but for now, continue ahead on the Blue Trail. 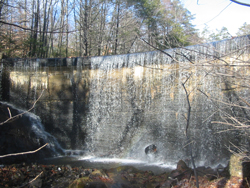 Soon, the trail crosses a broad expanse of open rock with several cedar trees and descends to Apshawa Brook, where the Blue Trail ends at a junction with the Green Trail. Turn right onto the Green Trail, which loops around, goes through a gate, and crosses the brook on a metal bridge just below the dam of the Butler Reservoir (due to safety concerns, the historic stone dam has been breached and a concrete spillway constructed to lower the water level of the reservoir). Here, the Red Trail joins.

Continue to follow both green and red blazes as the trail climbs to a T-junction with a gravel road. Turn right onto the road, which leads in a short distance to a viewpoint over the reservoir. After taking in the view, return to the junction and continue ahead on the road.

After passing a small wetland on the right, follow the Green Trail as it turns left, leaving the road, and goes through a gate. 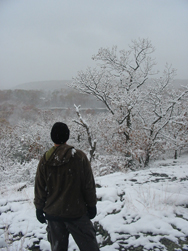 The Green Trail now begins a gradual but steady climb on a woods road. After passing through mountain laurel thickets and bearing left at a fork, the trail reaches the summit of a hill. Rock outcrops on the right afford views to the south and west, although the views are partially obscured by trees.

After pausing to take in the view, continue ahead on the Green Trail. You’ll pass interesting rock formations on the left and begin a steady descent on a rugged, winding footpath. Parts of the descent are rather steep.

At the base of the descent, the trail turns left onto a woods road which parallels Apshawa Brook and passes beautiful cascades in the brook, below to the right. A short distance ahead, you'll come to a fork. Bear right, following the green blazes, and descend to the brook. 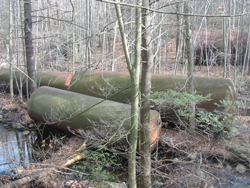 To your right, you'll notice four huge rusted tanks that were installed as part of a water purification system in the early 1900s. Here, the trail crosses the brook on rocks and turns left, passing the ruins of two small stone-and-concrete buildings. Follow the green blazes upstream along the brook. Soon, you'll come to the base of a curved concrete dam, also built in the early 1900s to regulate the flow of water in the brook. The trail bears right and climbs to the top of the dam, with a nice view over the small reservoir that has been impounded behind the dam.

The Green Trail climbs through mountain laurel and hemlock, then  turns left at a gate in the deer fence (don’t go through the gate). The trail now descends a little, then levels off. After a short climb, the Green Trail bears left, but you should continue straight ahead, now following the Orange Trail. The Orange Trail continues to the top of a rise, levels off, then descends to end at a junction with the Blue Trail. Turn right onto the Blue Trail and retrace your steps back to the parking area where the hike began. This hike follows woods roads and footpaths through the southern area of the preserve, climbing to a viewpoint and passing beautiful cascades and interesting historical remnants of a century-old water purification plant.

The Apshawa Preserve is a rugged 576-acre tract owned by Passaic County and the New Jersey Conservation Foundation. About seven miles of trails traverse the preserve, and this hike features the trails in the southern section of the preserve. The trails are marked with paint blazes and with colored plastic diamond blazes that incorporate the logo of the New Jersey Conservation Foundation....

rate experience
August 04, 2018
0
What a beautiful little park!!!
I've lived in NJ for 40 years but never found this wonderful little park. It was hot today - 86 degrees when I left the car - but the trail is very shady. It rained HEAVY yesterday and this morning, so the trails were very wet, but the streams and waterfalls were spectacular. I would definitely recommend doing this hike after there's been a lot of rain, with waterproof/Gortex shoes. I don't think it would be nearly as nice without the raging streams. However, crossing the Apshawa brook near the southern end of the Green Trail loop was a challenge and I was wading up to my knees in the stream.
jwrushman
August 03, 2017
3
Decent hike, views might be better during the wintertime
I did this hike today and finished it in about 2 and a half hours. I went somewhat slow and took a detour on the white and red outlook trails. The map provided by the Apshawa Preserve marks a viewpoint on the white trail, but during the summer it was mostly obscured by leaves. It was the same on the green trail, although one viewpoint was mostly unobstructed. The views weren't much to write home about, too. Wyanokie high point and the Silas County Park are within a short drive of this park, and they provide much more expansive views.
bromli
November 18, 2014
0
New Apshawa Trail Configuration
<p>Thank you for noting the map discrepancies on our Jersey Highlands map 125.&nbsp; The Apshawa trail system was reconfigured in 2013 with some new trail routes as well as changes to blaze colors, so our 1st edition map (published in 2011) does not show these trails entirely correctly.&nbsp; We will be sure to show the new configuration on the next 2nd edition revision of the maps.<br><br>A map available on the preserve's website shows the recent changes:<br>http://www.njconservation.org/apshawapreserve.htm<br><br>It is great to hear the trails were well-marked, although it is still recommended that one carry a map!<br><br>~Jeremy, TC Cartographer</p>
Jeremy Apgar
More Reviews
Log in or register to post comments