From the kiosk just below the parking area, head south on the white trail, which parallels Route 9D. Soon, a blue trail begins on the right, and then a yellow trail begins on the right, but continue ahead on the white trail  In a quarter mile, the white trail bears right, away from the road, and descends rather steeply into a ravine, where it crosses a stream on large boulders. It turns right and briefly parallels the stream, then bears left, climbs out of the ravine. The trail now bears right and continues to parallel the stream.

At the crest of the rise, the pink trail begins on the right, but you should bear left, continuing to follow the white trail, which begins to head south. You’ll immediately pass the start of the orange trail, on the right. Soon, the white trail begins a gradual descent towards the Hudson River, running close to the southern boundary of the preserve. About two-thirds of a mile from the start, after descending through a shallow ravine on rock steps and paralleling an old stone wall, the white trail ends at a dirt road. Turn right and proceed north on the road, passing the Manitou Marsh on the left.

Bear right at the next intersection and cross over the Metro-North railroad tracks on a wide stone-arch bridge. This is an active railroad, and you may see Metro-North or Amtrak passenger trains on their way to Poughkeepsie, Albany or New York. To the right (north), the cone-shaped hill in the distance is Sugarloaf Hill.

On the other side of the bridge, immediately turn left onto the blue-blazed River Trail, which parallels the railroad tracks. On the right, beyond a wooden fence, is the historic Livingston Mansion, built in 1897 (the mansion and its grounds are privately owned and not open to the public), and on the left (across the tracks), you can see the ruins of an old brick building. Soon, the trail curves right, away from the tracks, and reaches a dirt road.

Cross the road and continue on the blue-blazed trail, which climbs over a rise on switchbacks and stone steps, then descends to the shore of the Hudson River. The trail turns left onto a narrow footpath along a bluff overlooking the river, with panoramic views across the river. You may see a freight train on the CSX tracks across the river. Use caution, as there are steep drop-offs on the right. At one point, the trail crosses a wooden bridge over an area where the footpath had become eroded.

After following closely along the river for about a quarter of a mile, the trail turns left and steeply climbs rock steps. If you look back to the north, you can see Sugarloaf Hill above the trees. In a short distance, the trail bears left again and heads inland, soon reaching a complex junction, with a grassy carriage road on the left and two branches of the blue-blazed River Trail on the right. Turn sharply right and follow the branch of the blue-blazed trail that runs closest to the river.

In another quarter mile (after bearing right at a fork), the blue-blazed trail ends at a south-facing viewpoint, with a stone bench. After taking in the view, retrace your steps on the blue-blazed trail for 200 feet, then bear sharply right at a trail junction. You’re now following the inland branch of the blue-blazed River Trail, which leads to the complex junction you encountered earlier in the hike. Turn right onto the carriage road (still following the blue blazes), which curves to the left and heads north.

When you reach the next junction (the road ahead is blocked off with a gate), turn right and retrace your steps on the blue-blazed trail to the bridge over the railroad. Turn right again, cross the bridge, and follow the dirt road uphill.

After crossing a stream, the road curves to the left. On the right, you will see stone steps, which mark the start of the yellow trail. Turn right, climb the steps, and follow the yellow trail uphill to a T-junction, where you turn left onto the blue trail. When you reach the white trail, turn left and follow it a short distance to the parking area where the hike began. 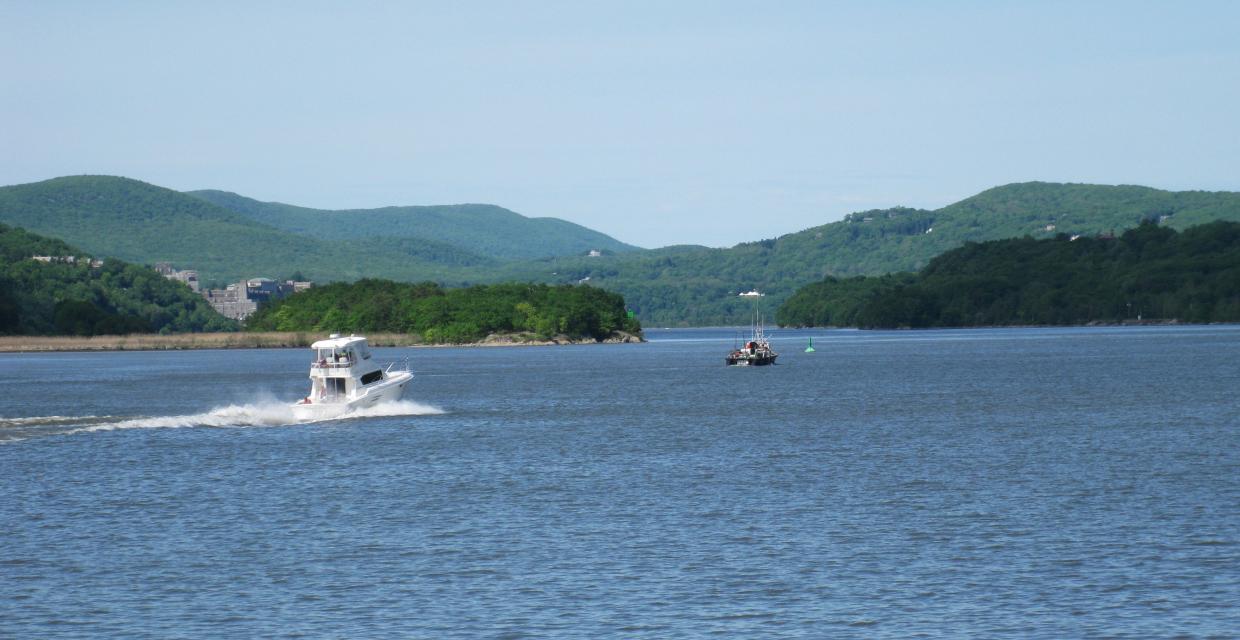 This figure-eight hike loops around the preserve, with spectacular views across the Hudson River.

From the east end of the Bear Mountain Bridge, head north on Route 9D for 1.7 miles and turn left into the parking area for the preserve at a small sign for the "Manitou Point Nature Preserve." The parking area is 750 feet north of the intersection of Route 9D with South Mountain Pass.

Take the Metro-North Hudson Line to Manitou station (only limited service is provided, primarily on weekends; check their schedule). From the station, proceed east on Manitou Station Road for 0.1 mile until you see on the left two stone pillars with a white gate. Go around the gate and turn left onto a dirt road that runs along the southeast edge of Manitou Marsh. In 0.3 mile, the white trail begins on the right. Continue along the dirt road until you reach the start of the green trail (on the right) and follow the hike description, beginning with the third paragraph of the text. To return to the train station, when you reach the intersection of the blue trail with the white trail (last paragraph of description), turn right onto the white trail and follow it to its terminus on the dirt road. Turn left on the dirt road, follow it back to Manitou Station Road, then turn right on Manitou Station Road and follow it back to the station.

rate experience
November 23, 2015
0
Ahhh, thanks for the
<p>Ahhh, thanks for the clarification there! I guess a bunch of us got lucky with the trains that day.&nbsp;</p>
ricky
November 07, 2015
0
Trains at Manitou
<p>I do not believe that the information you provided about the trains stopping at Manitou is correct. &nbsp;You are correct that, heading southbound, back to New York City, only the three trains you mention are scheduled to stop at Manitou (the precise times they are scheduled to stop are 1:22 p.m., 4:22 p.m. and 7:22 p.m.). &nbsp;These trains are supposed to stop at the Manitou station regardless of whether you "wave them down." &nbsp;But the other trains will not stop there, even if you try to "wave them down." &nbsp;This goes for both northbound and southbound trains. &nbsp;One cannot just "wave down" any northbound train, take it one stop to Garrison, and then change for a southbound train. &nbsp;There is, however, a norhtbound train scheduled to stop at Manitou at 2:02 p.m., so if you miss the southbound 1:22 p.m. train, you could take the 2:02 p.m. norhtbound train one stop to Garrison and change there for a southbound train. &nbsp;Moreover, the train change at Croton-Harmon is a temporary one, due to construction, which will end next weekend. &nbsp;After that, trains from Manitou will run directly, without change, all the way to Grand Central Terminal.</p>
Daniel Chazin
November 07, 2015
0
First Timer Hiker
<p>As a first time hiker, I found this to be really enjoyable. The directions were on point so I didn't get lost any part of the way. I mainly wanted to provide a trail map and explain a bit about the journey back to NYC via Metro North.</p> <p>&nbsp;</p> <p>I started logging the trails a bit late so it's a little under 5 miles. http://cl.ly/image/2s2d2v1Y3o0j</p> <p>&nbsp;</p> <p>Metro North - Currently the only trains stopping at Manitou NYC bound on weekends arrive at 1:22pm, 4:26pm, 7:30pm. You have to wave them down at the little shack with the seats. Having not realized this, we missed a few trains. What you can do however is wave down any train heading towards&nbsp;Poughkeepsie and hop on it for one stop (Garrison). These trains arrive every hour. When you get off at Garrison, wait for the train that is going towards&nbsp;Croton–Harmon. Hop on that train and once you reach Croton-Harmon, you will need to wait for an express train back to Grand Central Terminal. This seems to be a bit of information that's missing. We found several other stranded hikers trying to get back to NYC. Hopefully this helps others and others leave this information on other trails they take. Happy Hiking!<span style="font-size: 12.16px;">&nbsp;</span></p>
ricky
More Reviews
Log in or register to post comments