At the southern end of the parking area (to the right, as you enter), you will see a kiosk and three inverted-red-triangle-on-white blazes on a tree. These blazes mark the start of the Indian Rock Trail, blazed many years ago by Joseph "Ace" Tachine (who also erected many hand-painted signs along the trail), and more recently reblazed by the New York-New Jersey Trail Conference. 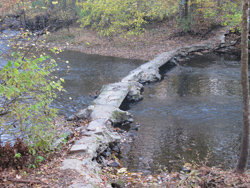 Follow the Indian Rock Trail through a small picnic area and into the woods on a level footpath. After bearing left at a T-intersection with a woods road, you'll reach the Wanaque River, which is crossed on a stone-and-concrete footbridge. A short distance beyond, the trail crosses another woods road, with stone-and-concrete ruins visible on either side of the trail. These are remnants of manufacturing facilities constructed many years ago by the E.I. duPont de Nemours & Co.

After a brief but steep climb, the trail turns right and levels off, soon passing a large rock outcrop to the left. You may notice several faded figures of Native Americans in feathered headdress painted on the rock, giving it the name "Indian Rock." The trail continues to ascend more gradually, crossing yet another woods road (the route of a gas pipeline) about half a mile from the start. Just beyond, the trail bears right at a fork.

In another third of a mile, you'll reach a T-intersection. Here, the Indian Rock Trail turns right, while the orange-blazed Wanaque Ridge Trail begins on the left. This will be your return route, but for now, turn right to continue on the Indian Rock Trail. Soon, the Indian Rock Trail ends at a junction with another woods road, which comes in from the right. Bear left and proceed ahead on the road, now following the white-"C"-on-red-blazed Cannonball 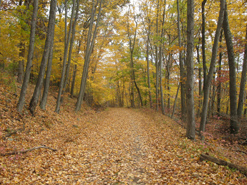 You're now heading north on a level gravel road, paralleling the western shore of Ramapo Lake, but some distance from the water. Because of the dense vegetation, you'll only be able to catch a glimpses of the lake through the trees.

After paralleling the lake for about half a mile, you'll pass a building on the hillside to the left that was formerly used as a ranger station. The road now approaches the scenic lake and, a short distance ahead, a rock ledge on the right offers a broad view over the lake.

In 500 feet, you'll reach another rock ledge that also offers a good view over the lake. Just beyond, a gravel road joins from the left. Continue ahead on the road, crossing a stone causeway that isolates a quiet pond on the left from the main body of the lake.

After a slight climb, you'll reach a clearing for a pipeline. Turn right, continuing along the MacEvoy Trail, which follows the pipeline for about 250 feet, then bears left and reenters the woods. Just beyond, you'll notice a sign that marks the start of the Wanaque Ridge Trail.

Bear left, leaving the MacEvoy Trail, and continue along the orange-blazed Wanaque Ridge Trail, which soon begins a steady descent on a rocky woods road. In about a third of a mile, you'll bear left onto a narrower woods road, which levels off and even climbs a little.

In another third of a mile, you'll reach a fork. Follow the orange blazes, which bear right, leaving the woods road, and soon begin to descend through a ravine. You'll cross a wet area and a stream, and eventually bear left onto a woods road that goes through another ravine, passing a large rock outcrop (known as Profile Rock) on the left. Be alert, for in 300 feet the trail turns sharply right and begins to climb to the western ridge of the Ramapo Mountains.

The trail soon bears right and heads north on a level footpath, then turns left and climbs to the crest of the ridge. Here, at a Y-intersection, the trail turns left again and heads south along the ridge.

In another quarter mile, you'll emerge in an open area at a high point on the ridge, with a panoramic west-facing view. The Wanaque Reservoir is below, with the massive Raymond Dam in the foreground, and the Wyanokies beyond. 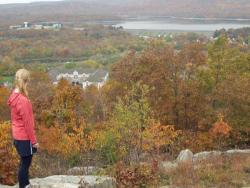 Continue south along the trail. In another five minutes, the trail turns left and climbs to an east-facing viewpoint at another high point. Just beyond, there is another view to the west over the Wanaque Reservoir.

The trail continues south along the crest of the ridge, with many views on both sides. After passing through an area studded with cedars, it bears left and descends rather steeply on a rocky path. After descending more gradually, the trail turns sharply left, then turns right onto a woods road.

A short distance beyond, you'll come to a Y-intersection, where the red-stripe-on-yellow-blazed Pete's Path goes off to the right. This trail leads to the private Wanaque Reserve, but you should bear left to continue on the orange-blazed trail, which crosses a stream, climbs to cross the gas pipeline, and turns right onto the woods road that parallels the pipeline.

The trail follows the pipeline road for only 60 feet, then turns left and climbs stone steps. After a relatively level section, the trail resumes its climb, then descends to end at a junction with the Indian Rock Trail. Turn right and follow the Indian Rock Trail, retracing your steps for about three-quarters of a mile to the parking lot where the hike began. This loop hike climbs to scenic Ramapo Lake and follows the Wanaque Ridge Trail along the western ridge of the Ramapo Mountains, with panoramic views.

At the southern end of the parking area (to the right, as you enter), you will see a kiosk and three inverted-red-triangle-on-white blazes on a tree. These blazes mark the start of the Indian Rock Trail, blazed many years ago by Joseph "Ace" Tachine (who also erected many hand-painted signs along the trail), and more recently reblazed by the New York-New Jersey Trail Conference.

Take I-287 south to Exit 55 (Wanaque/Pompton Lakes). Turn right at the bottom of the ramp onto Union Avenue, then turn left at the next light onto Ringwood Avenue (County 511), following the signs for “Wanaque.” Continue for 0.7 mile to the next light, and turn right onto Second Avenue. At a “stop” sign in 0.3 mile, turn left onto the Boulevard. At the next intersection, bear right to continue on Fourth Avenue. In 0.2 mile, where Fourth Avenue bears left, continue straight ahead on Back Beach Road and follow it to its end at a large parking area.

Take NJ Transit's #197 bus from the Port Authority Bus Terminal in New York City to the intersection of Ringwood Avenue and Second Avenue in Wanaque.  Walk east on Second Avenue to its end at the Boulevard, and turn left onto the Boulevard. At the next intersection, bear right to continue on Fourth Avenue. In 0.2 mile, where Fourth Avenue bears left, continue straight ahead on Back Beach Road and follow it to its end at a large parking area for Back Beach Park. The total distance from the bus stop to the trailhead is about 0.9 mile.

rate experience
May 03, 2019
5
Park at McAtee and Wolfe if trail through river is impassable
The trail in the river shown in the hike description photo was completely submerged. We drove up to McAtee Lane and Wolfe Drive, where the MacEvoy trail heads into the woods at the end of the road. (Put 98 Wolfe Drive, Wanaque, into your GPS, and it should get you there.) We skipped the Indian Rock Trail altogether, and otherwise had the same hike as described, just with a different lollipop stick. Great hike. I don't know how often that trail would be underwater, but at least you find out almost immediately after leaving the car. I believe I got a picture of Profile Rock, but I'm not sure if this was it: https://www.flickr.com/photos/kleepet/47714805452/in/dateposted/
kleepet
April 30, 2017
5
Great Hike
Did this hike last summer in August and it was beautiful. Went by bus and the directions were very clear, trails were well marked. We missed one very sharp turn and went the wrong path for a bit but quickly retraced our steps and saw the right path soon enough. This hike had a very nice mix of different landscapes and the ridge was very cool to walk across. The ponds and Ramapo Lake were completely covered in beautiful lily blossoms when we went.
rez
August 27, 2014
0
This trail is a winner!
I've been hiking 1-2 times a week this Summer and this trail was probably the best marked trail. Would like to thank David Chazin for all his hiking descriptions!
Laurie
More Reviews
Log in or register to post comments