The aqua-blazed Long Path -- which will be your route for the first part of the hike -- crosses the road near the barricade. Follow the Long Path to the north (left) as it begins to climb the ridge of Hook Mountain. In a short distance, you'll notice an old cemetery (the Wells Family Burial Ground) behind an iron fence on the right, with gravestones dating to the 1840s. You'll want to stop and take a look at this interesting feature.

Directly below you is the site of a former quarry. Beginning in the 1870s, a series of quarries were opened along this stretch of the river. Public outrage over this defacement of the Palisades led to the establishment of the park in 1911, but the scars carved into the hillside are a permanent reminder of these quarrying operations. Down below, along the river, you can see the Hook Mountain Bike Path, which will be your return route. The drop to river level is quite steep, so caution should be exercised when approaching the edge.

At the base of the descent, you'll notice an area surrounded by a chain-link fence on the right. The trail now resumes its ascent, soon beginning to parallel a stone wall on the left, with tennis courts beyond the wall. Just beyond the end of the wall, where the trail bears left and continues to ascend, a vague, unmarked path leads ahead to another viewpoint over the river from the top of another abandoned quarry.

For the next mile and a half, the Long Path continues along the undulating ridge, with the grades along this section being more gentle than those on the first part of the hike. The trail goes over one peak, passes to the right of a second peak, then climbs to two more peaks (the last peak, elevation 560 feet, is the highest point on this section of Hook Mountain).

After descending from the high point on the ridge, you'll reach a three-way trail intersection marked by a cairn. Here, the Long Path turns left, but you should turn right, now following the white-blazed Treason Trail (named for the treason of Benedict Arnold, who handed the plans to West Point to the British agent Major Andre along the shore of the Hudson River at the base of Hook Mountain). Soon, the Treason Trail bears left and begins a steeper descent to the river on switchbacks. Directly below you is the West Shore Railroad, built in 1883 and now operated by CSX. The railroad tunnels through the mountain, and the north portal of the tunnel is only about 150 feet from the trail. Many freight trains pass through the tunnel daily, and you may see and/or hear a train as you descend along the white-blazed trail.

As you approach the river, you'll pass a ruined stone structure on the right. Just beyond, the white-blazed Treason Trail ends at the Hook Mountain Bike Path, which is paved at this point. An abandoned stone park building is adjacent to the intersection. Turn right and follow the bike path, which continues south along the river as a wide gravel path on a shelf about 80 feet above the water level, with views over the river. You'll soon pass an abandoned quarry.

Continue along the bike path as it winds along the river, passing several ruins of former structures and two unobstructed viewpoints over the river. After about two miles of pleasant walking, you'll notice two more old quarries on the right. On the left, at the end of the second quarry, an abandoned road leads down to the river. This is the site of Rockland Landing North. Just beyond, on the right, is another vandalized stone building surrounded by cedar trees. Beyond the stone building, the site of yet another, even larger, quarry is visible on the right.

In another half mile, the bike path descends rather steeply to the river level (this portion of the path is paved). You're now at the site of Rockland Landing South, where ice from Rockland Lake was once shipped to New York City by boat. You'll pass some more abandoned buildings and see wooden pilings in the river -- the remains of former docks.

Beyond the pilings, the bike path (once again paved) begins to climb, soon reaching a junction with another park road. Turn sharply right, following the sign to "Rockland Lake," and proceed along the park road past the remnants of the largest quarry in the area and a stone building, now used as a private residence. Continue uphill on the road, now paved, until you reach the barricade which marks the crossing of the Long Path, where the hike began. 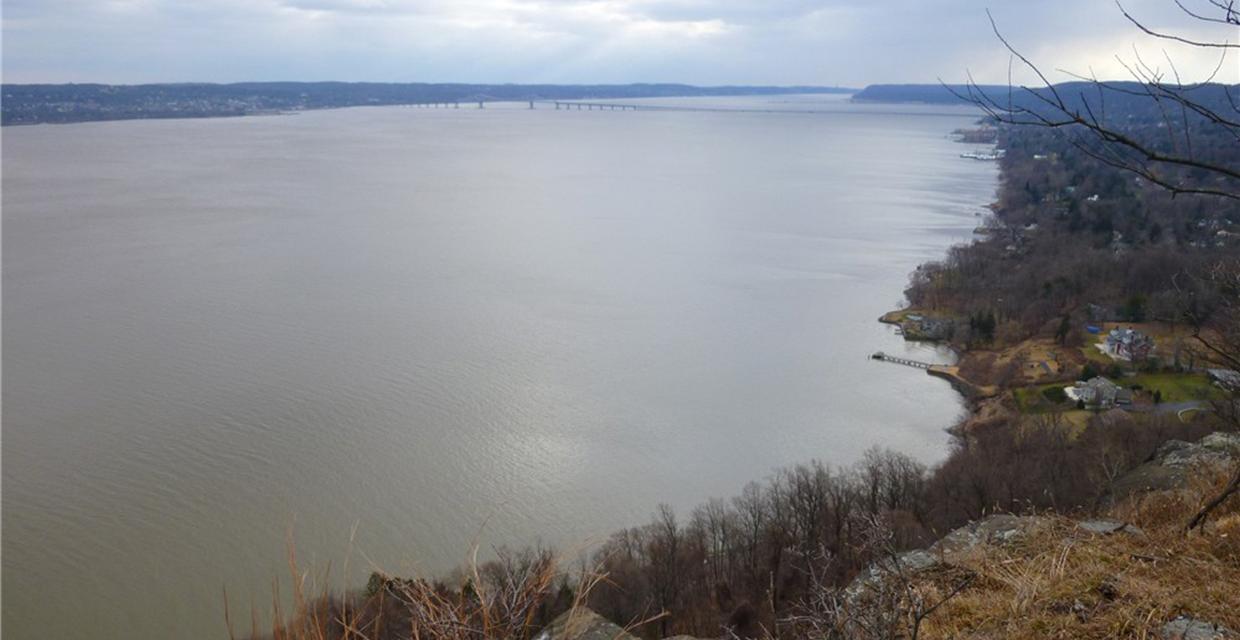 This loop hike follows the ridge of Hook Mountain, with many views, and returns via a bike path along the Hudson River.

The aqua-blazed Long Path -- which will be your route for the first part of the hike -- crosses the road near the barricade. Follow the Long Path to the north (left) as it begins to climb the ridge of Hook Mountain. In a short distance, you'll notice an old cemetery (the Wells Family Burial Ground) behind an iron fence on the right, with gravestones dating to the 1840s. You'll want to stop and...

Take the Palisades Interstate Parkway north to Exit 4, and turn left at the bottom of the ramp onto US 9W. Continue north on US 9W for about 10 miles (2.6 miles beyond the intersection with NY 59 in Nyack). At the bottom of a hill, turn right and enter Rockland Lake State Park. Continue ahead on the main park road, which curves to the right, and proceed for 1.5 miles to a three-way intersection. Here, the main road bears left, but you should continue ahead onto Landing Road (marked by a “No Outlet” sign). After passing a fire station on the right, park in the spaces provided along the road, just before a barricade across the road.