In another 300 feet, you’ll reach a Y-intersection where the Manor Trail divides into two routes. Bear right onto a grassy woods road to follow the loop in a counter-clockwise direction. Soon, you’ll reach another Y-intersection. The White Trail begins on the right, but you should bear left to continue on the blue-blazed Manor Trail. After passing through an area where the thick understory forms a canopy overhead, the trail bears right, leaving the road (which has been blocked off by branches). It continues on a footpath through a rocky, wet area, crossing several small tributary streams and then a wider stream (if the water is high, an easier crossing can be found upstream. Just beyond, you’ll notice a flooded 30-foot-wide excavation on the right.

The Manor Trail now traverses undulating terrain, with several minor ups and downs. After leveling off, it crosses the yellow-blazed Hasenclever Iron Trail, then descends to cross another wide stream (the crossing can be a little tricky if the water is high). It briefly parallels the stream, then bears left, away from the stream, and ascends gradually on a rocky footpath.

At the top of the climb, the trail reaches a woods road. The trail turns left here, but you should turn right and follow the woods road a short distance to reach a west-facing viewpoint, with power lines in the valley below. The hills across the valley are part of the section of Sterling Forest purchased by Passaic County in 1990 as a county park. The valley once was the site of several iron mines, including the Hope and Peters Mines. The Peters Mine was opened around 1740 and produced iron ore for over 200 years. You have now reached the midpoint of the hike.

After taking in the view, retrace your steps to the trail and continue ahead on the road as the blue blazes join 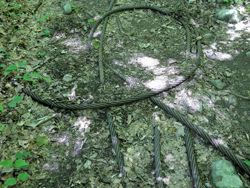 from the left. Soon, the trail begins a gradual descent. In half a mile, you will notice long strands of one-inch-thick twisted-strand wrought iron cables imbedded in the trail. These iron cables are remnants of mining activity during the nineteenth century at the nearby Hope and Peters Mines. It is possible that they were intended for use in a gravity conveyor system for the iron ore, constructed in 1858 but apparently never put into successful operation.

The trail now approaches Margaret King Avenue, and the sounds of the traffic can be clearly heard. The trail swings to the left, away from this busy road. Soon, the trail passes a house on the right and joins a wide gravel road. After passing tennis courts on the right, you’ll reach a Y-intersection. The road on the right leads out to the Ringwood Municipal Building, but you should take the left fork and go around a locked gate. 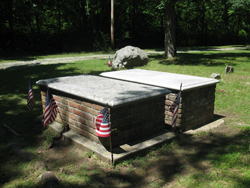 Just ahead, the trail passes a grassy area on the right, with the dam and spillway of Sally’s Pond beyond. A short distance ahead, you’ll pass a cemetery on the right. The two large graves nearest the trail are those of Robert Erskine and his assistant. Erskine, a Scottish engineer, was hired to run the local mines in 1771, and he sided with the Colonies during the American Revolution, serving as Surveyor General to the Continental Army. Near the pond are the graves of members of the Hewitt family, owners of the manor house in the late nineteenth century. An iron gate adjacent to the trail marks the graves of the Morris family.

Beyond Sally’s Pond, the trail crosses bridges over two streams. These streams, which lead to Sally’s Pond, are the same streams that you crossed earlier in the hike. Between the two bridges, the yellow-blazed Hasenclever Mine Trail crosses. At the next fork in the road, marked by two abandoned buildings on the left, the trail curves to the right. Follow the road ahead, past the manor house, to the parking area where the hike began. This loop hike passes a scenic pond and several features of historical interest.

In another 300 feet, you’ll reach a Y-intersection where the Manor Trail...

Take Skyline Drive to its northwestern end at Greenwood Lake Turnpike (County Route 511). Turn right and proceed north for 1.5 miles to Sloatsburg Road. Turn right onto Sloatsburg Road and continue for 2.5 miles to the entrance to Ringwood Manor, on the left side of the road. Park in the parking area adjacent to the manor house. A parking fee is charged on weekends from Memorial Day to Labor Day.

rate experience
March 23, 2019
5
Manor trail in Ringwood Manor State Park
After seeing Dan Chazin's overview of this trail I decided to check it out: Dan has always given very accurate information about the trails he previews, so it sounded interesting and relatively easy. I have to say the trail- even this early in the year (mid March) was well maintained and blazed. Very easy to follow also since at least half of it follows old mining roads. Even though there was the occasional muddy patch to negotiate it was not unreasonable, especially considering the time of year. We made it a point to view each point of interest Dan mentioned. This would make a good family or scout hike ( no younger than Webelo 1 due to the distance) since it is fairly easy to follow terrain wise as well as blaze wise. For a relatively easy yet interesting glimpse into the history of the area, I give this trail a very high rating. Great work previewing as usual, Dan!
ronr662
Log in or register to post comments