From the parking area, follow a gated road which heads east, towards Steeny Kill Lake. Bear left at the lakeshore and follow the light-blue-circle-on-white-blazed Steeny Kill Trail, which runs along the dam on the north side of the lake. At the end of the lake, cross the outlet stream and follow the trail through the woods. After a short climb, the Steeny Kill Trail ends at a junction with the red/green-circle-on-white-blazed Monument Trail.

Turn right onto the Monument Trail, which continues to climb, using switchbacks and stone steps (built in the 1930s by the Civilian Conservation Corps) for part of the way. After a short level stretch, the trail emerges on a paved road, with a stone building - the park's Interpretive Center - just ahead. Follow the trail as it turns left, descends on the paved road, and crosses Kuser Road to reach the northern end of Lake Marcia. (Swimming is permitted in Lake Marcia at the beach area when lifeguards are on duty.)

The trail follows a gravel road along the lakeshore. In 500 feet, it turns sharply left, leaving the lakeshore, and climbs on a rocky footpath to cross the paved Scenic Drive. A short distance beyond, you'll reach a junction with the white-blazed Appalachian Trail, which proceeds straight ahead and to the right. Follow the Monument Trail, which turns sharply left, traverses a very rocky area, and crosses the access road to the monument.

Just beyond, the trail turns right on a wide gravel road and climbs to reach the bas 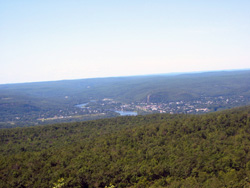 e of High Point Monument. Built in 1930 on the highest point in New Jersey (1,803 feet), this 220-foot monument offers panoramic views in all directions, with similar views from the wide platform at its base.

Return to the Monument Trail, turn right, and continue north along the gravel road. After passing restrooms, the trail follows the western edge of the parking area. At the northern end, it reenters the woods at a sign for the Monument Trail.

Continue north along the trail, which follows the easternmost ridge of Kittatinny Mountain, with views through the trees on both sides of the trail. In about half a mile, a short side trail to the left leads to a west-facing viewpoint over the Delaware River, Port Jervis, N.Y., and Matamoras, Pa. A short distance beyond, a side trail to the right leads to an east-facing viewpoint over the wide expanse of the Great Valley. After passing two more viewpoints to the right, the Monument Trail begins a steady descent.

At the base of the descent, the Monument Trail crosses a grassy woods road. Turn left and follow this unblazed road, which runs along the Cedar Swamp. At the next intersection, turn right and cross this interesting swamp on a boardwalk, then continue on a gravel footpath. A short distance beyond, turn right at a bench and a sign for the Shawangunk Ridge Trail, then turn left at the next intersection, rejoining the Monument Trail.

In 500 feet, at the top of a short climb, the Shawangunk Ridge Trail leaves to the right, but you should continue ahead on the Monument Trail. Soon, you'll reach a broad west-facing viewpoint from a rock ledge to the right of the trail.

After a level stretch, the trail begins another gentle climb, passing a more limited viewpoint on the way up, then descends steadily. At the base of the descent, the Monument Trail crosses a bridge over a stream and reaches a junction with the Steeny Kill Trail. Turn right and follow the Steeny Kill Trail back to the parking area where the hike began. 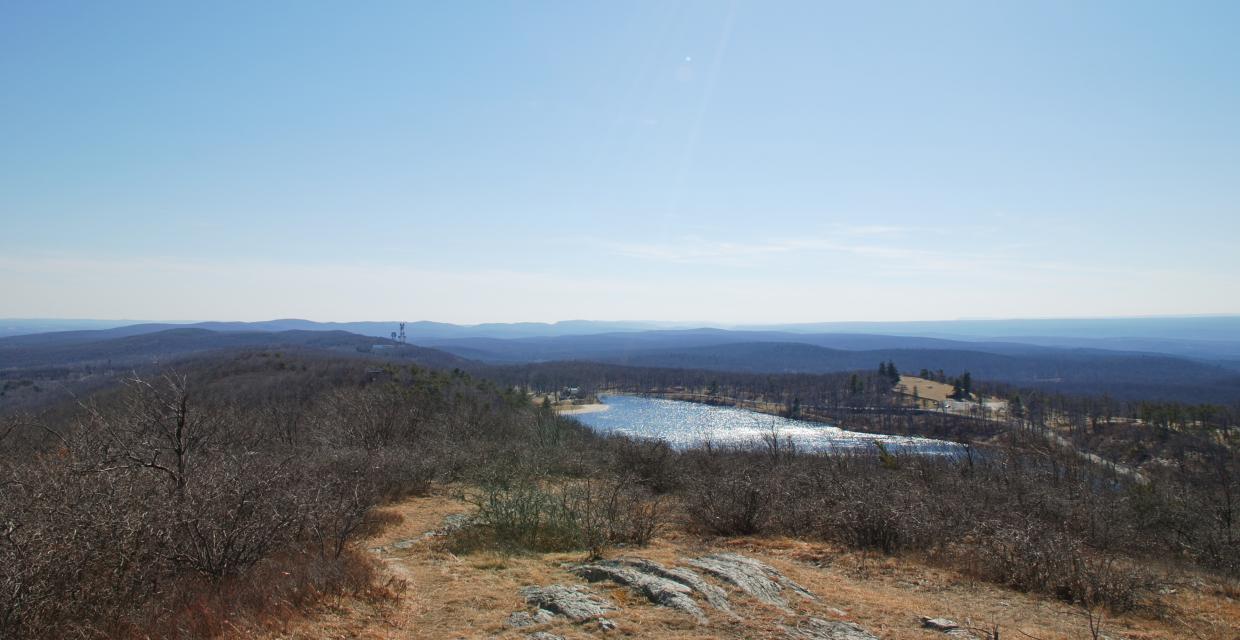 This loop hike goes along two scenic lakes and climbs to two ridges of Kittatinny Mountain, with panoramic views.

Follow Route 208 North to I-287 South. Take Exit 52B of I-287 (Route 23 North), and proceed north on Route 23 for about 35 miles to High Point State Park. Continue for 1.4 miles beyond the main park entrance, turn right at the Steeny Kill Boat Launch, and proceed for 0.1 mile to a small parking area on the left.

Thank you for bringing this error to our attention.  The coordinates listed were for the entrance road to cabins on the other shore of Steeny Kill Lake, so I have corrected them to the boat launch parking lot where this hike begins.

Jeremy Apgar
December 14, 2016
0
Wrong gps
The gps coordinates you list are incorrect. The correct coordinates are 41.32150, -74.67715.
mtimster
September 07, 2013
0
Gorgeous Hike
Hiked this in mid-August. It's very overgrown in many spots, and yes, very hard to find the trail at the end of Steeny Kill Lake. That said, this was one of my favorite hikes this summer. There were so many beautiful flowers around the lake, along the stream, and along the boardwalk - and I can't believe I've never seen the view from the "top" of NJ until this hike! Afterwards, lounged at the edge of Steeny Kill lake with a book. Couldn't have been a better day.
Little Bird
More Reviews
Log in or register to post comments