This hike follows the historic route of the Old Croton Aqueduct, built between 1837 and 1842 to supply water to New York City. Supplanted by several newer aqueducts, the Old Croton Aqueduct was taken out of service in 1955. The level footpath atop the Aqueduct "tube" has for many years been a favorite of walkers, and the Westchester County section of the Aqueduct became a state park in 1968. Except for occasional posts at road intersections with the letters "OCA," there are few markings along the route, so you should be careful to follow the directions below.

Begin the hike by proceeding south from Prospect Avenue along the route of the Aqueduct. Just before the next intersection, you will notice a chimney-like stone tower with the number "14." These towers, known as ventilators, were constructed along the Aqueduct about every mile. They were equipped with an open grate on top and allowed fresh air to circulate over the water passing through the Aqueduct.

When you reach the next intersection, White Plains Road (Route 119), you will have to detour from the route of the Aqueduct, which is 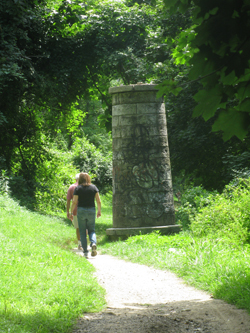 interrupted by the New York State Thruway just ahead. This will involve about half a mile of roadwalking, but it is the only detour you'll encounter on the entire hike. Turn right and follow White Plains Road for one block to South Broadway (Route 9), then turn left onto South Broadway, staying on the east side of the street. Cross the bridge over the Thruway and the Thruway ramp, and turn left onto Walter Street (just beyond Tarrytown Honda). Bear left onto Sheldon Avenue and follow it until you reach the Aqueduct route (just beyond #86).

Turn right onto the Aqueduct route. After crossing an embankment, you'll reach Gracemere (a private road), which is crossed on cobblestones. In a short distance, the Aqueduct passes through gateposts in a stone wall and reaches South Broadway. Cross this busy street at the crosswalk and continue on a wide dirt path blocked off by wooden posts, entering the grounds of Lyndhurst -- an American Gothic Revival "castle" built about 1840 and once owned by railroad magnate Jay Gould. Follow this dirt path through Lyndhurst. Soon after you leave the Lyndhurst property, you'll pass ventilator #15 and begin to follow a high stone wall on the left.

In another half mile or so, after crossing Sunnyside Brook on an embankment, you'll enter a quiet residential area. The Aqueduct crosses several paved roads and follows a wide right of way past large, attractive homes. Then, about 2.5 miles from the start, you'll pass a parking area adjacent to a school and cross Main Street in Irvington. Continue ahead through a municipal parking area and immediately pass ventilator #16.

Just beyond, you'll traverse a high embankment over Jewells Brook. After crossing two streets, you'll notice the unusually-shaped Octagon House, built in 1860, on the right. Next, the Aqueduct passes through the Nevis Estate, now the property of Columbia University. The brick mansion with white columns on the right side of the trail was built by Colonel James Hamilton III, son of Alexander Hamilton, in 1835.

After passing ventilator #17, you'll pass through the campus of Mercy College. You'll then traverse an embankment over North Brook, pass Dobbs Ferry High School on the left, then cross another embankment. At the end of the second embankment, you'll pass a kiosk on the left (with information on the history of Dobbs Ferry and the Aqueduct) and climb steps to Cedar Street in Dobbs Ferry. Cross the street and continue ahead through a parking area. The Aqueduct now parallels Main Street in the village of Dobbs Ferry, with views over the Hudson River to the right.

In a few blocks, you’ll reach an interpretive sign which explains the history and engineering of the Aqueduct. The adjacent barn and garage are used as maintenance facilities. Across Walnut Street is the Overseer’s House -- a brick building, built in 1857, which formerly served as a residence and office for Aqueduct caretakers. The building has been restored as a visitor center and park office (it is open to the public on weekend afternoons). Just beyond, the Aqueduct crosses to the east side of Broadway and follows an embankment through a residential area, with more views over the Hudson River.

In another mile, the Aqueduct - now in the village of Hastings-on-Hudson - crosses back to the west side of Broadway at the Five Corners. Using the crosswalks provided, cross Chauncey Lane, Farragut Avenue and Broadway, turn left and cross the driveway of Grace Episcopal Church, then immediately turn right onto the route of the Aqueduct at a green "OCA" post. After crossing another high embankment, you'll go through a parking area and begin to parallel Aqueduct Lane on the right, with Draper Park on the left.

Soon, you’ll notice a sign on the left, "Quarry Road Trail." Here, a path goes down and passes under the Aqueduct. The Aqueduct is supported by a stone-arch bridge, built in 1840 over a railway that served a former marble quarry to the east of the Aqueduct. It is worth taking this short side trail to get a view of this beautifully preserved stone-arch bridge.

Near the end of a long, uninterrupted stretch of the Aqueduct route, you'll pass ventilator #18. About half a mile later, after crossin

g another high embankment over a stream and a private road, you'll come to a particularly fine unobstructed view over the Hudson River and the Palisades. After passing the entrance to Lenoir Park and then a stone building on the left, you'll reach Odell Avenue, which crosses the Aqueduct in the middle of a broad curve in the road.

Turn right and follow Odell Avenue downhill to Warburton Avenue, then descend through the park on steps to reach the Greystone Metro-North station. Northbound trains to Tarrytown leave every hour - 57 minutes past the hour on weekends (for schedules, go to www.mta.info). Be sure to sit on the left side of the train to enjoy beautiful views of the Hudson River! The train ride takes only 15 minutes. When you arrive in Tarrytown, proceed to the southern end of the station and follow Franklin Street up the hill. When you reach South Broadway, turn right and proceed for several blocks to Leroy Avenue. Turn left onto Leroy Avenue, then turn right into the parking lot for an office building. Just ahead, you will see the Aqueduct embankment on the right side of the parking lot. Follow the Aqueduct for one block to Prospect Avenue, where the hike began. 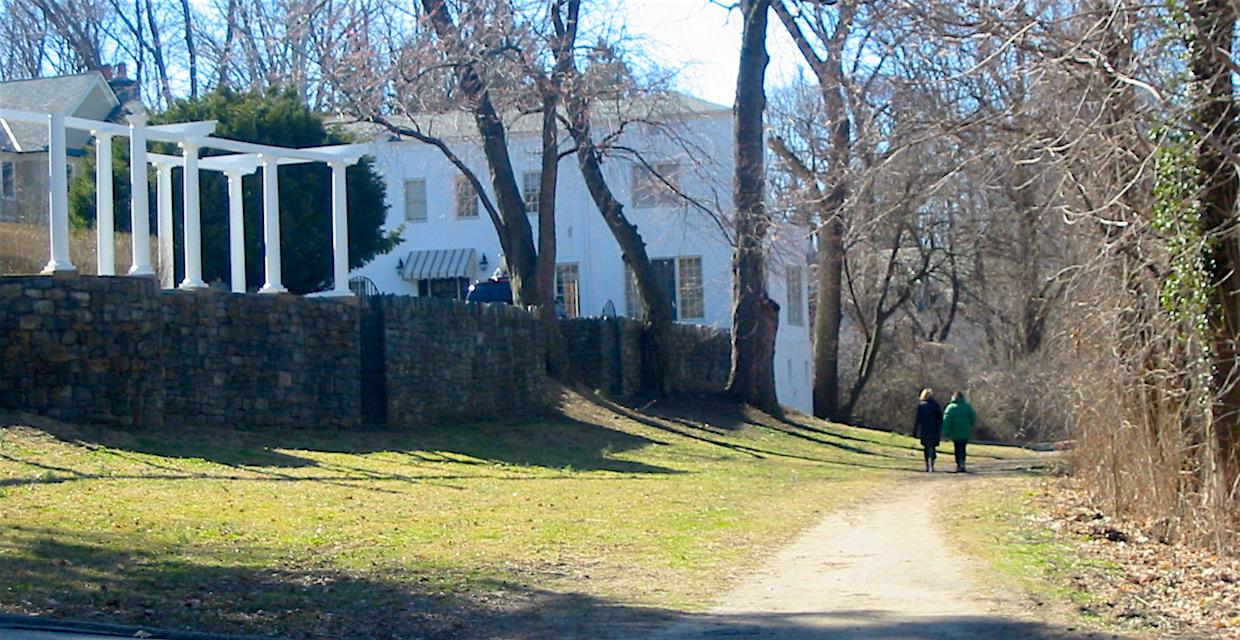 This level hike follows the route of the historic Old Croton Aqueduct from Tarrytown to Yonkers, with return via Metro-North train.

Take the Metro-North Hudson Line to the Tarrytown Station. Be sure to sit on the left side of the train to enjoy beautiful views of the Hudson River! When you arrive in Tarrytown, proceed to the southern end of the station and follow Franklin Street up the hill. When you reach South Broadway, turn right and proceed for three blocks to Prospect Avenue. Turn left and continue to the Aqueduct route.  You will return from the Greystone station.