Take Skyline Drive to its northwestern end at Greenwood Lake Turnpike (County Route 511). Turn left and proceed south for 1.6 miles to West Brook Road. Turn right onto West Brook Road and cross the Wanaque Reservoir on a causeway. At the next intersection, turn left, then take the second left onto Snake Den Road, following signs to the New Weis Center. In 0.3 mile, bear left at a fork, and continue for another 0.3 mile to a large dirt parking area on the right, just before the entrance to the New Weis Center.

The hike begins at the western end of the parking area, where a gatepost with a triple light-green blaze marks the start of the Otter Hole Trail. You'll be following this trail for the first third of a mile (other trails, such as the "L" Trail and the "W" Trail, are co-aligned for part of the way). Continue along the driveway leading into the New Weis Center, lined on both sides with Norway spruce trees. Bear right at the first fork, but at the next fork, turn left and follow the light-green blazes through a spruce grove, with Blue Mine Brook on the left.

Soon, the trail bears right to skirt the Highlands Natural Pool. Built about 70 years ago, this pool is fed by the brook and is not chlorinated. For more information on this pool, see www.highlandspool.com. The trail briefly joins a dirt road, then bears left and ascends on a footpath, passing cascades in the brook and the weir that regulates the supply of water to the pool.

The trails level off and reach a junction where they split. Here, you should bear left, following the yellow-on-white blazes of the Mine Trail.  Continue along the Mine Trail for about three-quarters of a mile, passing a junction with the orange-blazed Roomy Mine Trail on the left. When you reach a junction with the red-on-white-blazed Wyanokie Circular Trail, turn right and follow the red-on-white blazes (as well as the teal diamond blazes of the Highlands Trail). Immediately after crossing another stream, the white-blazed Lower Trail begins on the left.

Turn left onto the Lower Trail, which climbs on an old woods road to an east-facing shoulder of the Wyanokie High Point-Carris Hill Ridge. After bearing left and crossing two streams on rocks, the trail levels off. Soon, it proceeds through a shallow valley, with a series of rock outcrops on the right. After a while, the trail begins to descend gradually and traverses a series of open rock outcrops.

After descending some more through mountain laurel thickets, the Lower Trail reaches a junction with the yellow-blazed Carris Hill Trail. This is the most southerly point of the hike, and you’ve hiked about 2.5 miles to reach this point. Turn right and begin to follow the yellow blazes.

After traversing a level, rocky area, the Carris Hill Trail crosses a stream and begins a rather steep climb. The grade soon moderates, but after a third of a mile, the trail again climbs steeply over rocks, coming out at a viewpoint to the southeast from a rock outcrop just to the right of the trail. It continues to climb to another rock outcrop, with a somewhat broader view. Here, the trail bears right and ascends to the left of a 40-foot-high massive rock face. At the top of the ascent, a short detour to the right leads to a magnificent viewpoint to the east. The Wanaque Reservoir, contained by the Raymond and Green Swamp dams, is in the foreground, with a long viaduct of I-287 visible in the distance. On a clear day, the New York City skyline may be seen on the horizon. This is a good place to pause and enjoy the spectacular view. 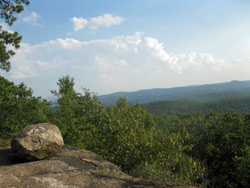 The yellow trail now climbs more gradually, soon reaching another viewpoint, where a ten-foot-high balanced glacial erratic is silhouetted against the sky. The trail curves to the right and reaches a fifth viewpoint, this one to the south, with pitch pines and a large glacial erratic. It proceeds through laurel to end, on a rock outcrop with views to the north and west, at a junction with the blue-blazed Hewitt-Butler Trail and the teal-diamond-blazed Highlands Trail.

Follow the blue and teal blazes, heading north (towards “Weis”). The trail descends steeply through mountain laurel thickets, climbs a little, and then levels off along the ridge. In about half a mile, you’ll reach a rock outcrop with a view ahead of Wyanokie High Point – a rocky dome with pitch pines. This location is known as “Yoo-Hoo Point” – the name apparently derived from the fact that, from here, one can see hikers standing atop High Point and call out to them! 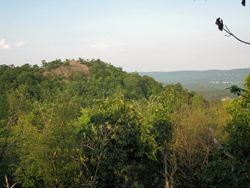 The joint Hewitt-Butler/Highlands Trail now descends to a junction, where the red-on-white-blazed Wyanokie Circular Trail joins. Continue ahead (in the directions of the “Hi-Point” sign), now following the route of three trails. After crossing a stream, the trails begin a rather steep climb.

At the next junction, turn right, again following the sign to “Hi-Point.” You’re now following the red-on-white blazes of the Wyanokie Circular Trail and the teal diamond blazes of the Highlands Trail, which climb steeply through mountain laurel thickets and across open rock ledges. In a short distance, you’ll reach the summit of Wyanokie High Point, marked by a bolt drilled into the rock. The summit features a panoramic 360̊ view, with the Wanaque Reservoir below, and the New York City skyline visible to the east on a clear day. To the north and west, one can see Saddle, Assiniwikam and Buck Mountains..

After spending some time savoring the views from this magnificent location, surrounded by pitch pines, retrace your steps, following the red-and-white blazes as they descend very steeply over bare rock. Extreme care is required here during wet weather, or when the trail is covered with snow and ice. When you reach the junction with the Hewitt-Butler Trail, turn right and follow the blue blazes.

After a short, gradual climb, the trail reaches a balanced boulder on a rock ledge. It then descends slightly to a mountain laurel thicket, where the white-blazed Macopin Trail leaves to the left. Continue ahead on the blue trail, which soon arrives at a rock ledge surrounded by pitch pines, with a view over Saddle Mountain to the north and Assiniwikam Mountain to the west. A short distance ahead, there is another viewpoint from a rock ledge just to the left of the trail.

The trail now begins a steep descent on a wide path. The descent eventually moderates, and the trail reaches a junction with the Mine Trail in a mountain laurel thicket. Bear left here, now following both blue and yellow-on-white blazes. In a short distance, both trails end at Snake Den Road, here a dirt road. Cross the road and continue ahead on the green-blazed Otter Hole Trail, which passes the Highlands Natural Pool, follows Blue Mine Brook, and ends at the parking area where the hike began.