Follow N.J. Route 17 north to the New York State Thruway and take the first exit, Exit 15A (Sloatsburg). Turn left at the bottom of the ramp onto N.Y. Route 17 north. Continue on Route 17 through the villages of Sloatsburg, Tuxedo and Southfields. About two miles north of Southfields, turn right onto Arden Valley Road. Cross the bridge over the New York State Thruway, then make the first right and park in the paved parking area to the west of a large meadow, known as the Elk Pen.

Take Shortline bus from Port Authority. Buy tickets to Southfield, but ask the bus driver to let you off at Arden Valley Road in Arden next to a "Welcome to Harriman State Park" sign (a couple of miles north of Southfields).  Return bus stops across the street - wave the driver down.  After you get off the bus, make a right onto Arden Valley Rd., walk across the bridge over the NY State Thruway,then make the first right  Continue through a paved parking area to the west of a large meadow, known as the Elk Pen 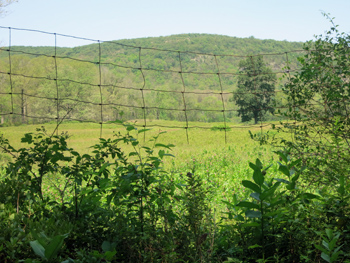 From the parking area, proceed east across the meadow, following the white-blazed Appalachian Trail (the white blazes are on posts). At the end of the meadow, the trail curves to the right. In another 100 feet, the Appalachian Trail leaves to the left, but you should continue ahead, now following the inverted-red-triangle-on-white blazes of the Arden-Surebridge (A-SB) Trail.

You are heading south along the Arden Road, built by Edward Harriman in the 1890s. In places, the old road has narrowed to a footpath. You will notice remnants of an old wire fence on the right. This fence was built to enclose an area once inhabited by elk brought from Yellowstone National Park in 1919. The elk did not thrive, and the small remnant of the herd was relocated in 1942. The area formerly enclosed by the fence, though, is still known as the Elk Pen.

In a third of a mile, the A-SB Trail turns left, leaving the road, but you should continue ahead along the road, now following the Stahahe Brook Trail, marked with red-horizontal-stripe-on-white blazes. In another third of a mile, you’ll reach Stahahe Brook, with attractive cascades on the left. The road formerly crossed the brook on a stone-arch bridge, but the bridge was washed away during Hurricane Irene in 2011.

Turn left onto the Nurian Trail, which climbs on switchbacks. From the crest of the rise, the trail descends to cross the outlet stream of Island Pond, with a cascading waterfall on the left. It then turns left and begins to parallel the stream, passing more cascades and waterfalls, as well as an interesting grassy meadow. At the top of the ravine, it goes through the Valley of Boulders – a narrow passage between large rocks. 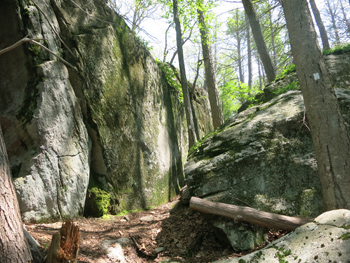 The Nurian Trail now bears right and runs along a long, sloping rock, with limited west-facing views. A short distance beyond the end of the rock, you’ll reach a junction with the yellow-blazed Dunning Trail. Turn right, leaving the Nurian Trail, and follow the yellow blazes.

The Dunning Trail soon reaches a rock ledge overlooking Green Pond. This pristine pond – one of the very few in the park that was not enlarged by the construction of dams – is surrounded by reeds. You’ll want to take a break here to enjoy the wild beauty of this special spot.

The trail continues along the shore of Green Pond, following a rugged, rocky route. At one point, the trail passes beneath an overhanging rock. The white-blazed Nurian Trail runs very close to the yellow-blazed Dunning Trail in this area, so be careful to follow only the yellow blazes and not the white blazes. After moving away from the pond, the Dunning Trail crosses the white-blazed Nurian Trail, then turns left onto the Island Pond Road, a woods road. Soon, the yellow-blazed trail turns right, leaving the road, and - in about 150 feet - reaches the entrance to the Boston Mine. This mine, which was last worked in 1880, is cut into the hillside, with a water-filled pit at the northern end. The mine entrance is usually quite wet, and caution should be exercised (do not approach the water-filled pit). 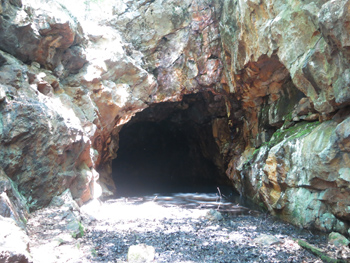 After taking a look at this interesting mine, go back to Island Pond Road and turn right. There are no blazes to guide you along this stretch of the road, but the route is clear and unmistakable. The road gradually descends through hemlocks and mountain laurel. After about a third of a mile, the A-SB Trail (inverted red triangle on white blazes) joins from the right. You’ll be following this trail for the nearly the rest of the hike.

Just beyond, you’ll reach a fork, where you should bear left, continuing to follow the red-triangle-on-white blazes. A short distance beyond, the red-triangle-on-white blazes bear left again, leaving Island Pond Road, and descend to cross the outlet stream of Island Pond on rocks. The trail continues around the southern end of Green Pond Mountain and comes out in an area where young hemlocks and pines are beginning to revegetate an area damaged by a forest fire. Just before the trail begins a steep descent, an unmarked side trail on the right leads to a limited west-facing viewpoint from open rocks.

The A-SB Trail now turns right and begins to run along a ledge, with a fairly steep drop to the left. Soon, it turns sharply left and begins a rather steep descent on switchbacks, passing an overhanging rock on the left. At the base of the steep descent, it bears left, crosses a stream, then turns right and levels off. Soon, it again begins to descend, but on a more moderate grade.

After crossing another stream, you’ll reach Arden Road. Turn right and follow the road, now retracing your steps. Where the A-SB Trail ends, turn left and follow the white-blazed Appalachian Trail across the meadow to return to the Elk Pen parking area, where the hike began.