From the east end of the Bear Mountain Bridge, proceed north on N.Y. Route 9D for about 8.5 miles to the Village of Cold Spring. Continue ahead on Route 9D for another two miles past the intersection with N.Y. Route 301 in Cold Spring. Immediately after passing through a tunnel under Breakneck Ridge, park in a small parking area on the right (east) side of the road. (If this parking area is full, continue north for another 0.2 mile to a much larger parking area on the west side of the road).

On weekends and holidays, take the Metro-North Hudson Line from Grand Central Terminal to the Breakneck Ridge station and walk south along Route 9D to the trailhead.  On weekdays, take the Hudson Line to the Cold Spring station.  Proceed north along the platform to Main Street and turn right. Turn left onto Fair Street, follow it to Route 9D, then head north on Route 9D to the trailhead.

Despite its relatively short length, this is generally considered to be the most strenuous hike in the East Hudson Highlands. It involves steep climbs over rock ledges that can be very slippery when wet. You'll need to use both your hands and your feet in many places along the way. Proper footgear is essential for this hike, which is best done on weekdays, to avoid the crowds on weekends. Do not attempt this hike in wet weather, or if the trail is covered with snow or ice.

The white-blazed Breakneck Ridge Trail starts on the west side of Route 9D, just north of the tunnel, and heads south, almost immediately reaching a viewpoint over the Hudson River from a rock outcrop to the right of the trail. Bannerman’s Castle on Pollopel Island is visible to the north, and Storm King Mountain, directly across the river, may be seen through the trees

Follow the white-blazed trail as it steeply climbs the exposed rocky ridge. There are views through the trees of the river as you climb, but it will probably take you about 20 to 30 minutes to reach the first panoramic view -- from a rock ledge marked by a flagpole. The views up and down the river from this point are spectacular, and you will want to take a rest from the strenuous climb and enjoy the panoramic views. 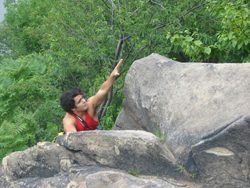 Looking up to the top of the ridge from this spot, you’ll notice a steep, near-vertical rock outcrop that the trail climbs to gain the crest of the ridge. The trail bears slightly to the left to find a climbable route, but this part of the trail is the most challenging from a technical point of view. This steep climb can by bypassed by following an easier alternative route on the left.

Where the easier route rejoins the main route, a short side trail on the right leads to another panoramic viewpoint over the river from a rock ledge. The trail continues to climb steeply, passing more viewpoints. Finally, you’ll come out on a rock outcrop with spectacular views over the river. From here, the trail descends slightly. At the base of the descent, an easier alternative route goes off the left. The main trail route now climbs through a wooded area and emerges on south-facing ledges, with views over Bull Hill and the valley between Breakneck Ridge and Bull Hill. The traverse of these ledges (which is missed if you take the alternative route) is a highlight of the hike.

After a very steep climb through pines, the alternative route joins, and trail reaches a south-facing viewpoint over the river. It then descends steeply and, after climbing a little, reaches a junction with the yellow-blazed Undercliff Trail, which begins on the right. You’ve hiked less than a mile from the trailhead, but it will certainly seem that you’ve hiked much farther! Continue ahead on the white-blazed Breakneck Ridge Trail, which now climbs steeply to reach another panoramic viewpoint. This one is a little different from the previous overlooks, as a knob of Breakneck Ridge protrudes just to the left of Storm King Mountain, across the river.

The trail now climbs a little more, then levels off, with some minor ups and downs. The first two knobs you traverse offer south-facing views over Bull Hill, and as you continue, you’ll get a few glimpses of the river, below on the left. 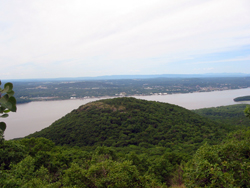 Soon, you’ll reach a viewpoint to the right of the trail, looking northeast over Sugarloaf Mountain, with the Newburgh-Beacon Bridge in the distance. The trail continues to descend along an eroded woods road, with the trail having been rerouted to the left to avoid some badly eroded sections. After making a sharp left turn, the trail climbs slightly to reach another view of Sugarloaf Mountain. This one, at a closer range, is obscured by vegetation..

After descending -- first steeply, then more gradually -- the Breakneck Bypass Trail ends at a junction with the yellow-blazed Wilkinson Memorial Trail. Turn left and follow the Wilkinson Memorial Trail, which proceeds downhill along a woods road (now largely narrowed to a footpath) to its end at Route 9D. Turn left and follow Route 9D south for about 0.3 mile to the parking area where the hike began.

Watch our video about Hiking at Breakneck