Take the Palisades Interstate Parkway to its terminus at the Bear Mountain Circle. Proceed north on US 9W, cross the viaduct over Popolopen Creek, and immediately turn right into the Fort Montgomery State Historic Site. Park in the parking area at the bottom of the ramp. (If the parking area is closed, or no parking spaces are available, proceed north on Route 9W to another parking area on the east side of the road and walk back to the Fort Montgomery Historic Site.)

Near the bottom of the ramp, at the entrance to the parking area, you'll see a brown post with a yellow arrow, a blue blaze, and 1777W and 1779 blazes. This marks the start of three co-aligned trails: the 1777W and 1779 Trails (which commemorate Revolutionary War events) and the blue-blazed Timp-Torne Trail. Follow these trails up stone steps and under the US 9W viaduct.

Soon, the trails turn left on a paved road. They follow the road for only a short distance and reenter the woods. In another 0.2 mile, the trails turn left onto the paved Mine Road, but in 125 feet, they turn right, leaving the road, and descend on a grassy woods road. In a short distance, the three trails turn left on a footpath, briefly joining the red-on-white-blazed Brooks Lake Trail. The trails cross a wet area on puncheons, then immediately bear left, climb the hillside (with seasonal views of Brooks Lake below on the right), and come out once again on the paved Mine Road.

Turn right onto the paved road and follow it for about 500 feet. Just past the intersection with Wildwood Ridge (another road), follow the three trails as they turn left, leave the paved road, and descend into the woods. The trails soon cross a stream on rocks and join a wide woods road - the route of the West Point Aqueduct, built in 1906. At first, the route climbs steeply, but it soon descends steeply and then levels off, with a stone-and-concrete retaining wall on the left. The trails begin to parallel Popolopen Gorge, with the rushing waters of Popolopen Creek visible in places through the trees on the left. 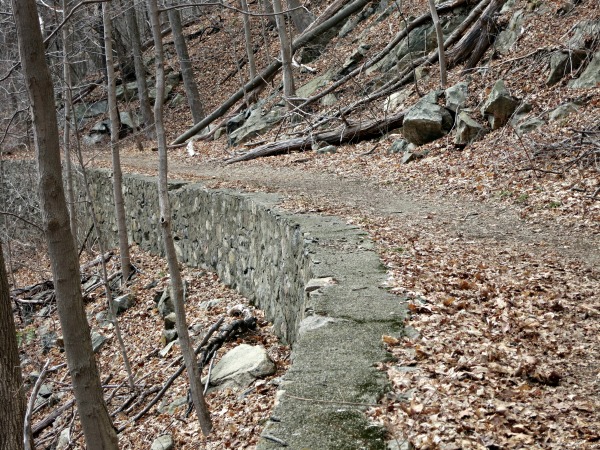 After about two-thirds of a mile along the West Point Aqueduct, you'll reach a trail junction. The 1777W and 1779 Trails continue ahead, following the aqueduct, but you should turn sharply right, following the blue blazes of the Timp-Torne Trail, which climbs gradually on a woods road, soon reaching paved Mine Road. The trail turns left, follows Mine Road for 100 feet, then turns right at a kiosk and begins to climb the Popolopen Torne on stone steps and switchbacks. After a relatively level stretch, the trail turns left and climbs more steeply. Soon, it comes out on a east-facing viewpoint over the Hudson River, the Bear Mountain Bridge and the East Hudson Highlands from a rock ledge.

You'll want to stop here for a short break, but - despite what you might think - this is not the summit of the mountain. Continue ahead on the trail, which makes a sharp bend to the south and continues to climb over rock ledges. In another ten minutes or so, you will reach the true summit of the Popolopen Torne, where open rock ledges afford a 360° view. From here, you can see not only the Hudson River and the Bear Mountain Bridge to the east, but also Bear Mountain to the south, and the hills of the West Point Military Reservation to the west. 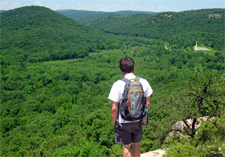 After spending some time at this beautiful spot, continue ahead as the trail steeply descends the mountain on rock ledges. The descent is much steeper than the climb, and you will have to use both your hands and your feet in places. About halfway down, the trail reenters the woods and continues to descend more moderately on stone steps and switchbacks. You'll cross paved Mine Road and unpaved Fort Montgomery Road and descend to rejoin the 1777W and 1779 Trails at the West Point Aqueduct.

Turn right and follow the three trails (Timp-Torne, 1777W and 1779) along the aqueduct route for 250 feet, then turn left, descend stone steps, and cross Popolopen Creek on a 62-foot footbridge. This prefabricated bridge was installed in 2012 by a volunteer trail crew from the New York-New Jersey Trail Conference, replacing a similar bridge that was severely damaged in 2011 by Hurricane Irene. 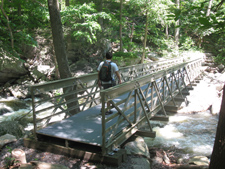 On the other side of the bridge, the trails climb the hillside to reach the route of the Bear Mountain Aqueduct, built in 1929 and rebuilt in 2012. Here, the Timp-Torne, 1777W and 1779 Trails turn right, but you should turn left, now following the red-on-white blazes of the Popolopen Gorge Trail. The trail proceeds along the route of the 1929 aqueduct (you will note manhole covers and exposed sections of the pipe along the way), passing through a wild and beautiful section of the Popolopen Gorge. Although the Palisades Interstate Parkway is only a short distance to your right, for most of the way the sounds of traffic are drowned out by the sounds of the rushing waters in the gorge far below.

Soon, the route of the 2012 aqueduct comes in from the right, and the trail begins to follow it. In three-quarters of a mile, the Popolopen Gorge Trail descends on switchbacks and stone steps towards the bottom of the gorge. Near the bottom, it turns right onto a level footpath. A short distance ahead, it bears left at a fork and descends to the level of the cascading creek. It passes the site of the former Roe Pond, created in 1901 by the construction of a stone dam across the creek. The dam (visible just ahead) was recently breached. The trail now climbs a little, then descends to reach an abutment of a former bridge over Popolopen Creek, from where it climbs out of the gorge on a wide gravel road.

At the top of the climb, the trail bears left and heads out to the trailhead on US 9W. Cross this busy highway (watch carefully for traffic), turn left, and cross the viaduct over Popolopen Creek, with panoramic views to the right of a suspension footbridge and a railroad bridge over Popolopen Creek and the Bear Mountain Bridge over the Hudson River. At the end of the viaduct, turn right and descend the ramp into the Fort Montgomery State Historic Site, where the hike began.

To view two photo collections for this hike, click here and here.