Take the New York State Thruway to Exit 18 (New Paltz). Beyond the toll booths, turn left onto Route 299 and continue west through the Village of New Paltz. After crossing the bridge over the Wallkill River at the west end of the village, continue ahead on Route 299 (do not turn right towards the Mohonk Mountain House). In another 5.5 miles (from the Wallkill River bridge), Route 299 ends at a T intersection with Route 44/55. Turn right here and follow Route 44/55 for half a mile to the Mohonk Preserve Visitor Center, on the right side of the road. Stop at the visitor center to purchase a pass, obtain a free map and view the interesting exhibits. Then continue ahead on Route 44/55. The road makes a very sharp hairpin turn and climbs to Trapps Bridge (a steel truss overpass). Continue for 0.3 mile past the Trapps Bridge, and turn right into the West Trapps Trailhead Parking Area.

From the kiosk at the eastern end of the parking area, follow the yellow-blazed West Trapps Connector Trail which leads east, parallel to Route 44/55. In about 750 feet, a sign on the left marks the start of the red-blazed Shongum Path. Turn left and head downhill on the Shongum Path, the route of an old Lenape Indian trail. The trail crosses rock outcrops and descends through a dense hemlock forest.

After passing a junction with the yellow-blazed Enderly’s Path, which begins on the left, the trail crosses a stream on a wooden bridge. It follows a long stretch of narrow boardwalk across a wet area and continues along a gravel path bordered by rocks. After approaching the Coxing Kill and briefly paralleling an old stone wall, the Shongum Path descends steps to end at the Old Minnewaska Trail, a gravel road.

Turn left onto Old Minnewaska Trail (also the route of the Shawangunk Ridge Trail) and cross the bridge over the Coxing Kill. To the right is Split Rock, where the stream passes through a fascinating crevice in the bedrock. Continue ahead along the gravel road, passing ruins of the Enderly home on the right and their barn on the left, and cross paved Clove Road to reach the Coxing parking area. Bear left at the parking area towards a kiosk, where three light-blue blazes mark the start of the High Peters Kill Trail. You’ll be following the High Peters Kill Trail for the next three miles (this trail is also the route of the Shawangunk Ridge Trail, with its logo markers appearing at junctions and other locations along the way).

The High Peters Kill Trail follows a woods road, passing the Enderly Burial Ground on the right. It then crosses a wet area on a boardwalk and continues through a hemlock forest. After crossing a stream on a wooden bridge, the trail begins a gentle climb, paralleling the stream for a short distance. It then crosses the stream on rocks and bears right, away from the stream.

Soon, you’ll come to a junction with the yellow-blazed King’s Lane Trail, which continues straight ahead. You should turn left, following the blue-blazed trail, which levels off and follows an old stone wall through a former farm. Soon, another yellow-blazed trail begins on the right. After crossing another stream, the High Peters Kill Trail bears right and begins a steeper climb. Soon after recrossing the stream on rocks, the trail leaves the Mohonk Preserve and enters Minnewaska State Park Preserve..

The climbing now becomes very steep, with the trail routed over stone steps in places. For part of the way, the trail follows the Dugway, a 19th century woods road used to transport millstones quarried near here. After passing lichen-covered rock outcrops and an interesting “cave” formed by an overhanging rock, the grade moderates.

A short distance beyond the end of the steep climb, as the High Peters Kill Trail turns left, continue straight ahead on an unmarked trail. In about 150 feet, you’ll reach an expansive east-facing viewpoint over the Trapps ridge, with the Sky Top tower of the Mohonk Mountain House visible to the left. This is a good spot to take a break. 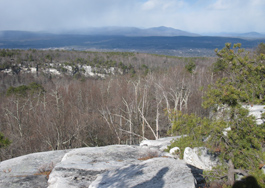 ws a relatively level path through blueberries and mountain laurel, with some pitch pines. Just below the crest of the rise, the white-blazed Bull Wheel Trail, which leads to the Peters Kill parking area on Route 44/55, begins on the left. The High Peters Kill Trail now climbs to a pass between the low cliffs of Dickie Barre and begins a gradual descent.

After descending a short distance, you’ll reach an open area with pitch pines growing on exposed rock ledges. Here, the High Peters Kill Trail turns sharply right and begins a steady descent. You should continue straight ahead along the rocks to a dramatic viewpoint from the edge of the cliffs, with the Catskills visible in the distance to the right.

When you’ve spent some time enjoying this beautiful spot, return to the blazed trail and turn left, beginning a rather steep descent over exposed rock ledges. At the base of the descent, you’ll reach the picturesque Peters Kill. A yellow-blazed trail leads left to the Peters Kill parking area, but you should bear right to continue along the blue-blazed High Peters Kill Trail, which crosses the stream and a tributary on wooden truss bridges and then begins a steady climb through rhododendrons, mountain laurel and hemlocks.

After bearing left and heading southwest, parallel to the Peters Kill, you’ll reach a rock outcrop that affords a panoramic view over the valley of the Peters Kill and Dickie Barre. The trail follows the ridge high above the Peters Kill, climbing gradually, with many views from rock outcrops overlooking the valley below. Although the stream itself may not be visible, the roar of the water can be clearly heard.

Cross the road and follow a blue-blazed path to a large parking area. Here you bear left and head east along a paved road parallel to the highway. At the entrance kiosk, bear right, following the sign “Trail to Awosting Falls.” When you reach the access road to Lake Minnewaska, turn right, cross a concrete bridge over the Peters Kill, then turn left onto the Awosting Falls Carriage Road. You’ll be following carriage roads for the next 3.5 miles – for nearly the entire return trip. 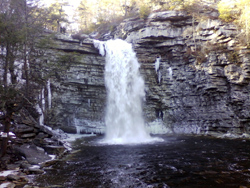 The carriage road you are following was built in 1907 to link the Mohonk Mountain House with Minnewaska, and it is marked with red diamond blazes. The road descends on a broad curve to reach the base of the 65-foot-high Awosting Falls, which are particularly spectacular after heavy rains. Below the falls, the carriage road continues to parallel the scenic Peters Kill.

In about half a mile, the carriage road approaches Route 44/55. Here you should bear right at a fork to continue on the carriage road. In another half mile, bear left at the next fork. Soon, the white-blazed Awosting Falls Connector Trail begins on the left. Just beyond, the carriage road crosses paved Lyons Road and re-enters the Mohonk Preserve (the red blazes end here).

The carriage road, now known as Trapps Road, continues around a hairpin curve and, in another two-thirds of a mile, crosses the Coxing Kill on a wooden bridge. The carriage road continues to parallel Route 44/55, but for most of the way, the highway is located some distance from the carriage road and cannot be seen (although sounds of traffic can sometimes be heard).  When you reach the Trapps Bridge over Route 44/55, cross the bridge, turn left, descend stone steps, and turn right on the yellow-blazed West Trapps Connector Trail that leads back to the parking area where the hike began.