Take the Palisades Interstate Parkway to its northern terminus at the Bear Mountain Bridge. Cross the bridge and proceed north on N.Y. Route 9D for 8.0 miles to Peekskill Road at the southern end of Cold Spring (just beyond the Boscobel Restoration). Turn right and follow Peekskill Road for 0.5 mile to its terminus at a junction with N.Y. Route 301, then turn right and follow Route 301 for 0.4 mile to its intersection with Fishkill Road (County Route 10). Bear left onto Fishkill Road and proceed for 0.4 mile to a small unmarked parking area on the left side of the road, just beyond a red fire hydrant, and opposite a break in the guardrail on the right side of the road (a brown sign marking the start of the Lone Star Trail is just beyond the parking area).

Proceed ahead on the blue-blazed Lone Star Trail, which climbs gradually along a woods road. In half a mile, 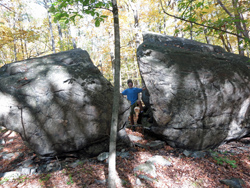 you’ll pass a huge split boulder to the right of the trail. Here, the red-blazed Split Rock Trail leaves to the left. This will be your return route, but for now, you should continue ahead on the blue-blazed trail.

After climbing a rather steep pitch, the trail levels off. Soon, the blue-blazed Lone Star Trail ends at a junction with a wide woods road – the route of the green-blazed Nelsonville Trail. Turn right and follow the Nelsonville Trail, which continues to climb along the woods road. Soon, you’ll encounter a rocky, eroded section of the road.

Near the top of the rise, the trail passes through mountain laurel thickets and reaches a junction. The blue-blazed Notch Trail begins on the right, but you should continue ahead on the woods road, now blazed white as the Washburn Trail. Follow the Washburn Trail as it climbs Bull Hill (Mt. Taurus) on broad switchbacks.

As the trail approaches the summit, you’ll come to a panoramic north-facing view from rock ledges just to the right of the trail. To the left, you can see the Hudson River. The imposing ridge extending northeast from the river is Breakneck Ridge, with the Newburgh-Beacon Bridge visible through a low point in the ridge. To the right, you can see the fire tower on South Beacon Mountain, the highest point in the East Hudson Highlands. In the distance to the left, the Shawangunk Mountains – and beyond them, the Catskills – may be seen on a clear day. This is a good spot to take a well-deserved rest, as you’ve climbed about 1,100 vertical feet to reach this point! 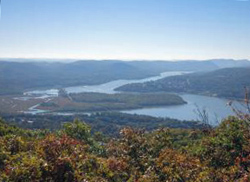 Just ahead along the Washburn Trail, an unmarked side trail leads left to a viewpoint from rock ledges to the south and east. Continue to follow the white-blazed Washburn Trail along the summit ridge. After passing the viewless summit – marked by a split rock on the right and a USGS survey marker along the trail – the trail makes a short, rather steep descent. Just beyond, an open rock ledge on the left affords a panoramic south-facing view over the Hudson River. Just north of the sharp bend in the river – of great strategic importance during the Revolutionary War – is Constitution Island, and beyond the bend is the United States Military Academy at West Point. To the right, on the west side of the river, is Crows Nest Mountain. On a clear day, you can see the Bear Mountain Bridge down the river in the distance.

After descending some more, you’ll reach a spectacular viewpoint over the Hudson River from a rock outcrop to the right of the trail. The view – the broadest of the entire hike - extends from West Point up the river to Storm King Mountain (identified by the gash carved into the mountain by the construction of the Storm King Highway in 1922).

The Washburn Trail continues to descend rather steeply, then ascends a little. Just beyond, you’ll come to a junction with the yellow-blazed Undercliff Trail. Turn left onto the Undercliff Trail, which soon reaches another viewpoint over Cold Spring and West Point, with Crows Nest Mountain visible to the right, across the river.

At the base of the descent, the Undercliff Trail reaches a T-junction with a wide woods road – the route of the green-blazed Nelsonville Trail. Turn left and follow the green blazes along this road. Soon, you’ll cross paved Gate House Road at a parking area and, in another 500 feet, you’ll cross a grassy strip which is the route of the Catskill Aqueduct. The stone building on the left marks one end of an inverted syphon that carries the water down to and then under Route 301, to the east.

Beyond the aqueduct, the trail begins to climb, first gradually, then more steeply. In about half a mile, you’ll pass rusted gate posts on either side of the trail. Just beyond, you’ll notice three red blazes that mark the start of the Split Rock Trail. Turn right and follow this short trail back to the Lone Star Trail at the “split rock,” then turn right again and follow the blue-blazed Lone Star Trail back to the trailhead on Fishkill Road, where the hike began.