Take the Palisades Interstate Parkway north to Exit 19. Continue for 0.5 mile on Seven Lakes Drive, then turn right onto an unmarked road that leads in a short distance to a parking area. (This is the first right turn you come to on Seven Lakes Drive.)

Walk towards the rear of the parking area. To the left (east), you will notice a white circular blaze with a red “1777W.” Turn left and follow this trail uphill. Soon after the trail levels off, you’ll reach a junction with the white-blazed Appalachian Trail (AT). Turn sharply right, leaving the 1777W Trail, and follow the AT, which climbs through mountain laurel thickets and soon turns right onto an old woods road.

After crossing a stream on rocks, the AT turns left, leaving the woods road, and begins a steady climb up the eastern face of West Mountain. (Straight ahead, the woods road is the route of the Fawn Trail, which crosses the AT here). Near the top, there is an outstanding viewpoint to the left over Bear Mountain, Iona Island and the Hudson River. The stone building on the summit of Bear Mountain is the Perkins Memorial Tower. 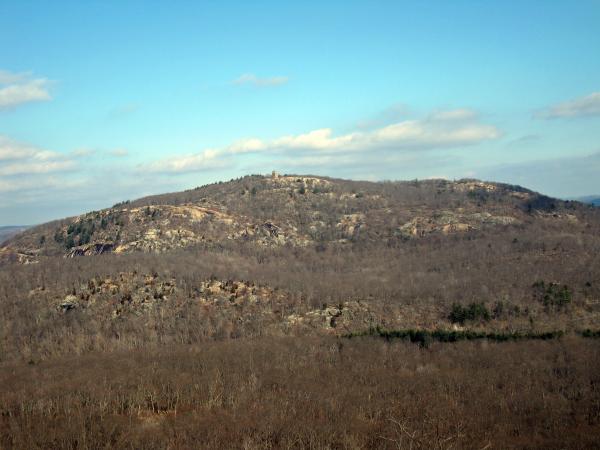 After a brief descent to a valley, the AT climbs steeply to a junction with the blue-blazed Timp-Torne Trail, which comes in from the right. Follow the joint AT/Timp-Torne Trail ahead, passing another viewpoint on the left over Bear Mountain, Iona Island and the Hudson River. The trail now swings to the west side of the ridge and soon reaches a west-facing viewpoint over Black Mountain. The Palisades Interstate Parkway and two large parking areas for the Anthony Wayne Recreation Area are visible in the valley below.

The joint AT/Timp-Torne Trail now proceeds south along the ridge. In a quarter mile, the trail traverses an open rock ledge, then descends steeply and crosses back to the west side of the ridge, soon passing more viewpoints to the west. After reaching another east-facing viewpoint, with a tower of the Bear Mountain Bridge visible to the northeast, you will come to a junction, marked by a signpost. Here, the AT continues ahead, but you should turn left and follow the blue-blazed Timp-Torne Trail, which heads southwest. Soon, the yellow-blazed Suffern-Bear Mountain Trail joins from the right. Continue ahead, following the blue/yellow-blazed trail, which runs along ledges, with views to the south. 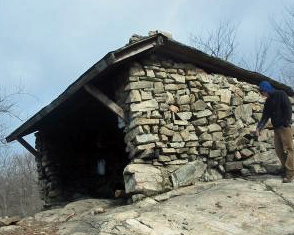 In another 0.3 mile, you’ll reach a junction. Here, the yellow-blazed trail continues ahead, but you should bear right, following the blue-blazed Timp-Torne Trail. In 500 feet, you’ll come to the West Mountain Shelter, built in 1928, which offers views over the Timp and the Hudson River to the southeast. On a clear day, the New York City skyline is visible in the distance. This is a good place to stop for a break.

After you’ve rested for a while, retrace your steps back to the junction of the blue and yellow trails. Turn right at the junction, following the yellow-blazed Suffern-Bear Mountain Trail, which descends to a valley and climbs to reach an east-facing viewpoint in an open area. The trail now descends, first steeply, then more gradually through mountain laurel thickets. After reaching another valley at the base of the descent, it climbs steeply, descends a little to a limited southeast-facing viewpoint through the trees, then climbs gradually to reach the top of a knoll.

The Suffern-Bear Mountain Trail now begins a steady descent of about 750 vertical feet. It soon reaches a very steep section, where it descends over jumbled boulders. Extreme care should be taken if the trail is wet, icy or snow-cov 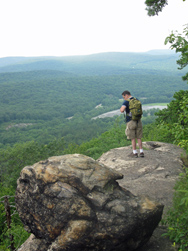 ered. The grade then moderates somewhat, and the trail soon joins an old woods road. About halfway down, the trail crosses a stream (the Doodlekill) and continues to descend along the road, with more gentle grades. The road is eroded in places, and the trail has been routed away from the road in a few spots.

At the base of the descent, follow the yellow-blazed Suffern-Bear Mountain Trail as it turns left onto a level road, the route of the Doodletown Bridle Path. It continues along the road for about 750 feet, then turns right, leaving the road, and ascends to cross a shallow ridge. The yellow-blazed trail then descends to cross a stream on rocks and follows an old road uphill to a junction with the 1777W Trail.

Turn left here, leaving the Suffern-Bear Mountain Trail, and follow the 1777W Trail westward. You’re now proceeding along the old Doodletown Road (which leads, on the right, to the abandoned hamlet of Doodletown). Soon, you’ll hear the sounds of traffic on the Seven Lakes Drive, above on the right, and pass a pine grove on the left.

Just before reaching Seven Lakes Drive, follow the 1777W blazes as they turn left, leaving the old road, and head uphill on a footpath jointly with the white-blazed AT. After a short level stretch, the AT turns off to the left, but you should continue ahead and follow the 1777W Trail back to the parking area where the hike began.