Take the New York State Thruway to Exit 18 (New Paltz). After paying the toll, turn left onto Route 299 and continue west through the Village of New Paltz. When you cross the bridge over the Wallkill River at the west end of the village, continue ahead on Route 299 (do not turn right towards the Mohonk Mountain House). In another 5.5 miles (from the Wallkill River bridge), Route 299 ends at a T intersection with Route 44/55. Turn right here and follow Route 44/55 for half a mile to the Mohonk Preserve Visitor Center, on the right side of the road. Stop at the visitor center to purchase a pass ($15 per person daily trail use fee; $55 annual pass), obtain a free map and view the interesting exhibits. Then continue ahead on Route 44/55. The road makes a very sharp hairpin turn and climbs to the Trapps Bridge. Continue for 0.3 mile past Trapps Bridge and turn right into the West Trapps Trailhead Parking Area.

From the vehicle turnaround at the eastern end of the parking area, follow the yellow-blazed West Trapps Connector Trail, a gravel road which leads east, parallel to Route 44/55. In about a quarter of a mile, you’ll reach the Trapps Bridge. Climb the gravel road that leads up to the bridge, turn sharply right, cross the bridge, then turn right again. About 150 feet beyond the bridge, three light-blue blazes mark the start of the Millbrook Ridge Trail. Turn 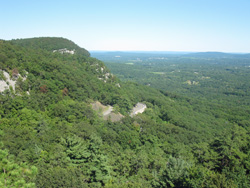 left and follow this trail – marked with paint blazes on the rocks – which steeply climbs over rock slabs dotted with pitch pines. Soon, you’ll reach a north-facing viewpoint (the first of many along the ridge).

A short distance beyond, after some more climbing, you’ll reach the crest of the ridge (known as the Near Trapps). Here, there is an even-broader view from a point called the Hawk Watch. To the left, you can see Dickie Barre, with the Catskill Mountains in the distance beyond. To the right, there is a sweeping view over the Wallkill Valley, with New Paltz visible in the distance. This is a good spot to rest and take a break from the climb.

The trail now levels off and continues through a wooded area along the ridge, with scrub oak and pitch pine and an understory of blueberry bushes. Soon, you’ll reach another viewpoint on the left, with the Sky Top tower of the Mohonk Mountain House visible to the north, and the intersection of Routes 299 and 44/55 directly below.

About a mile from the start, you’ll descend slightly and reach a junction with the red-blazed Bayards Path, which leaves to the right. Continue ahead on the light-blue-blazed Millbrook Ridge Trail, which bears left and climbs to the top of the next ridge, known as the Bayards. The trail follows along the ridge, passing several viewpoints over the Wallkill Valley. A long, relatively level section follows, with the trail cutting through groves of mountain laurel and blueberry bushes. Suddenly, the trail emerges onto a rounded outcrop with a view ahead (through the trees) of the dramatic cliff of Millbrook Mountain – the destination of the hike.

After bearing right and descending through mountain laurel and hemlock, the Millbrook Ridge Trail arrives at a junction with the red-blazed Millbrook Cross Path. You’ve now gone about two miles from the start. Continue ahead on the light-blue trail, which bends left and climbs to regain the crest of the ridge. Soon, it crosses a rock outcrop with several small glacial erratics. It continues on a relatively level footpath through laurel and hemlocks and emerges onto an open area, with many glacial erratics.

After traversing a rocky path through hemlocks, the trail arrives at the base of a cliff. It climbs rather steeply over rocks to the right of the cliff and continues on a footpath below the crest of the ridge. Soon, the trail bears left, climbs through a boulder field, and proceeds through an open area, with blueberries and pitch pines, to reach the crest of the ridge. This is the start of the most interesting and dramatic part of the hike 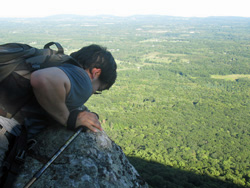 t and continues to climb along exposed rock outcrops, with views to the south and east over the Wallkill Valley as far as the Hudson Highlands. Sky Top may be seen to the northeast, and the Catskills in the distance to the north. Just beyond, the trail follows a narrow path to the right of a sloping rock slab. Next, the trail climbs to the very edge of the cliff, with a sheer 300-foot drop. Using extreme caution, you can peer over the sharp cliff edge and see the vast boulder field below – probably the moraine of a small glacier that remained after the main ice sheet had melted away. This is another good place for a break.

The trail continues to run along the cliff edge, then heads slightly inland. Finally – a little over three miles from the start – you’ll arrive at a junction with the red-blazed Millbrook Mountain Trail (marked by a sign for "Lake Minnewaska"). This is your return route, but first, continue ahead on the trail (now blazed red) for a few hundred feet to a sign for Millbrook Mountain, turn left and climb the rock slab to the edge of the cliff – the summit of Millbrook Mountain, which offers an even broader view than those you’ve seen until now. After taking in the view, return to the trail junction and turn left onto the red-blazed trail. 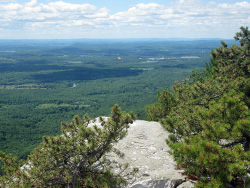 In 0.2 mile, turn right onto the light-blue-blazed Coxing Trail, which descends steadily over rock slabs dotted with pitch pines, then bears left and continues to descend through blueberry bushes, mountain laurel and hemlock. After leveling off and crossing a wet area on puncheons, the Coxing Trail reaches a junction with the Millbrook CrossPath, which begins on the right. Continue ahead on the Coxing Trail, which widens to a woods road.

About two miles from its start, the Coxing Trail ends at a junction with the dirt Trapps Road, a carriage road built by the proprietors of the Mohonk and Minnewaska Mountain Houses. Turn right and follow this level road for about a mile to the Trapps Bridge. Cross the bridge, turn very sharply left, and follow the connector trail back to the parking area where you began the hike.