Take I-287 South to Exit 35 (Madison Avenue) in Morristown. At the top of the ramp, turn right onto Madison Avenue, then turn left at the first traffic light onto South Street. Continue for 1.1 miles, passing the Seaton Hackney Stables on the left, then turn left into the parking area for Loantaka Brook Reservation.

Take the NJ Transit Morristown Line from Hoboken or New York Penn Station to the Convent Station.  Proceed to the south end of the station, turn right, and follow Convent Road southwest to Madison Avenue (Route 124). Turn left onto Madison Avenue and continue to Kitchell Road. Turn right onto Kitchell Road and follow it past Woodland Avenue to Loantaka Brook Reservation.  Turn left at the blue wand that marks milepost 0 and head south on a paved bicycle path.  Follow the hike description, beginning with the fourth paragraph. The distance from the railroad station to the trailhead is about 1.3 miles.

Loantaka Brook Reservation is a 744-acre park that straddles Loantaka Brook. This long, narrow park has both paved paths and an unpaved bridle path. The park map indicates that the paved trails are designated by color, but there are no blazes on the trails, and the assigned colors are evident only on occasional plastic wands. All trails in the park are frequented by walkers, joggers and bicyclists, but the paved paths are far more heavily used than the bridle path. The first part of this hike follows the paved bicycle paths, with the return on the bridle path.

To begin the hike, go back to the entrance to the parking area, and turn left (south) onto a paved bicycle path that begins here. Follow this paved path, which goes around a softball field and a grassy expanse and enters the woods. Soon, a paved path on the left leads back to the parking area, but you should continue straight ahead. A short distance beyond, a connecting trail on the left leads to an unpaved bridle path. The bridle path will be your return route, but continue ahead on the paved path, which briefly approaches Loantaka Brook, then continues parallel to a gas pipeline.

In two-thirds of a mile, the paved path reaches a grassy circle. Proceed ahead around the circle, then continue through a parking area, with a softball field and Kitchell Pond on the left. At the end of the parking area, turn left onto Kitchell Road for 125 feet, then turn right (at a blue wand that marks mile 0) onto a paved path that heads into the woods.

The path proceeds south through a pleasant wooded area, crossing Loantaka Brook, the bridle path and several tributary streams. About a mile from Kitchell Road, another paved path crosses, but continue ahead on the path you have been following. 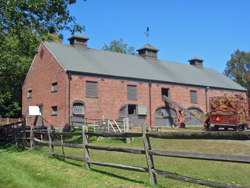 In another 0.2 mile, the path emerges onto the grassy route of a gas pipeline, which it follows to a parking area and a paved road, Loantaka Way. Turn right and head west along the road (you can walk on the grassy shoulder on the south side) for a third of a mile, passing the historic brick Gibbons Horse Barn (built in 1834 and still used for horses).

After crossing the bridge over Loantaka Brook, turn left at a crosswalk and proceed south on the paved path, passing the horse barn on the left and entering the woods. The path briefly approaches Loantaka Brook but soon moves away from it.

In three-fourths of a mile, the path curves left and crosses a bridge over Loantaka Brook. About 300 feet beyond the bridge (and just before a “no horses” sign), leave the paved path and turn left onto a dirt bridle path. You’ve now reached the halfway point and will be returning to the start of the hike on the unpaved bridle path. 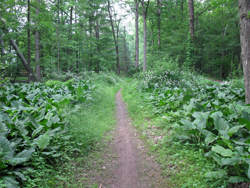 The first section of the bridle path is rather narrow and can be somewhat overgrown. In about half a mile, after passing an overgrown field on the right, you’ll begin to closely parallel the brook to the left and soon emerge onto an open grassy area. Just before reaching the horse barn, turn left, cross the brook on a bridge, then turn right and retrace your steps on the paved bicycle trail to Loantaka Way. 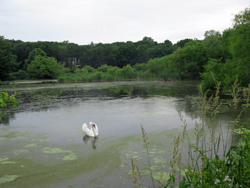 After passing more large homes on the left, the bridle path turns right and crosses the brook on rocks (this crossing can be difficult if the water is high). On the opposite side, bear left and head north on a wide dirt path, briefly joining the paved bicycle trail to cross a stream. When you approach Kitchell Road in another quarter mile, bear right and briefly parallel it, then cross the road and continue north, with a large townhome development on the right.

After coming out on the northeast shore of Kitchell Pond, the bridle path briefly joins another paved path. Proceed ahead (do not cross the bridge), but bear left at the next three junctions. The bridle path now closely parallels the winding brook, then crosses it on a wooden bridge. Bear right and continue along the bridle path to its end at a gate by the stables, then bear left across a grassy area to return to the parking area where the hike began.