Take I-287 South to Exit 47 (Montville/Lincoln Park) and turn left at the bottom of the ramp onto Main Road (Route 202). In 0.7 mile, just before reaching a fire station, turn right onto Taylortown Road and continue for 1.8 miles to Boonton Avenue (County Route 511). Turn right and continue for 0.7 mile to the entrance to the Pyramid Mountain County Park Natural Historic Area, on the left, opposite Mars Park.

Walk back to the entrance to the parking area and cross Boonton Avenue on a crosswalk just north of Mars Court. At a sign for “Turkey Mt. 100 Steps Trail,” the Yellow Trail begins. Follow this trail, which parallels the road at first, then crosses beneath overhead power lines. It bears right and follows a footpath through the woods, with the power lines on the right. At one point, it comes out at the power lines, crosses a wet area on puncheons, and then goes back into the woods.. 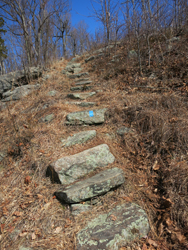 After climbing gradually, the Yellow Trail again emerges onto the power line corridor and climbs more steeply. Soon, it ascends a series of rock steps, known as the “100 Steps,” with a west-facing view near the top of the climb.

Continue to follow the Yellow Trail along the ridge for about 300 feet to a junction with the Orange Dot Trail (black dot on orange), which begins on the right. Bear left to continue on the Yellow Trail, which descends a little and then climbs gradually, paralleling and crossing several old stone walls. At 0.8 mile, after passing a stone wall just to the right of the trail which marks the summit of Turkey Mountain (892 feet), the trail levels off. The Yellow Trail reaches a large cairn in a stand of cedars at 1.0 mile. Here, a short side trail leads up a rock outcrop (which offers a limited seasonal east-facing view. Turn left and follow the Yellow Trail as it descends on an old woods road.

At a T-intersection near the base of the descent, the Yellow Trail turns right, but you should turn left onto the Red Trail, which follows another woods road. The Red Trail crosses a stream on rocks, briefly parallels the stream, then skirts a wetland on the right. After paralleling North Valhalla Brook for a short distance, the trail reaches the paved Stony Brook Road. It turns right and crosses the brook on the highway bridge, then turns right again and reenters the woods. The trail now heads south on a footpath, with North Valhalla Brook below on the right and Stony Brook Road above on the left.

After crossing a small stream on a rock slab, the Red Trail turns right and briefly joins a woods road. It then climbs over a knoll and crosses a stream on rocks. A short distance beyond, the trail reaches a junction with a woods road. It turns right onto the road, with Turkey Mountain visible through the trees on the right. Soon 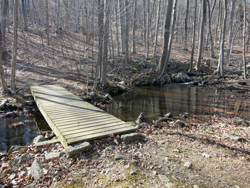 , the trail crosses North Valhalla Brook on a footbridge and bears right, passing an attractive waterfall.

Just beyond the waterfall, the Red Trail ends at a junction with the Yellow Trail. Turn left onto the Yellow Trail. In a short distance, the Purple Dot Trail (black dot on purple) begins on the left at a large cairn. Continue ahead on the Yellow Trail, which climbs a little and follows a rocky footpath along the side of a hill.

In a short distance, you'll reach the rim of a long, narrow ravine. This ravine is a remnant of a quarry that operated in the mid-to-late nineteenth century, with the crushed rock being used to remove impurities from iron that was smelted in nearby Boonton. Although commonly referred to as "limestone," the rock extracted in this area is more correctly known as dolomitic marble. The Yellow Trail bears right and follows the rim of the ravine, descending gradually.

Soon, a cairn on the right and a triple-white blaze on the left mark the start of the White Trail. Turn left onto 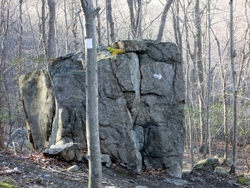 the White Trail, which follows a rather steep and winding route to a rock outcrop that overlooks Lake Valhalla below. Through the trees, you can see the New York City skyline in the distance on a clear day.

The trail now descends rather steeply. After passing a huge glacial erratic, the trail bears left and continues along a contour. Bear left to continue on the White Trail when the Orange Dot Trail leaves to the right. The White Trail now climbs a little, then descends and turns right to parallel a wetland.

Soon, the White Trail ends at a junction with the Yellow Trail. Turn left and follow the Yellow Trail to Boonton Avenue, then cross the road to the Visitors Center and the parking area where the hike began.