Take the Palisades Interstate Parkway to Exit 2 (Alpine) and follow signs to the Police Headquarters. Park in a dirt parking area on the right side of the Alpine Approach Road (on weekends, parking is also available in the paved parking lot for the Administration Building, on the left side of the road).

Take the Rockland Coaches (Coach USA) #9 or #9A bus from the George Washington Bridge Bus Terminal at 179th Street and Broadway in New York City (or the #9T or #9AT bus from the Port Authority Bus Terminal at 42nd Street and Eighth Avenue in New York City) to Closter Dock Road and Route 9W in Alpine, NJ. Walk north along Route 9W for about 500 feet and turn right onto the orange-blazed Closter Dock Trail, which heads east and proceeds through an underpass under the Palisades Interstate Parkway. After going through the underpass, turn right onto the aqua-blazed Long Path and proceed south, following the hike description.

Begin the hike by proceeding downhill on the Alpine Approach Road past the Administration Building and bear left onto a wide footpath at the “No Bicycles on Trails” sign. You’ll soon reach a tunnel under the road. Turn right, proceed through the tunnel, and climb stone steps on the other side. You’re now following both the aqua blazes of the Long Path and the orange blazes of the Closter Dock Trail. Turn left at the T-intersection and continue ahead parallel to the Parkway on your right.

In a few minutes, you’ll notice a tunnel under the Parkway on the right. Here, the orange blazes turn off, but you should bear left and continue parallel to the Parkway, following the aqua blazes. In a quarter mile, just past an old stone foundation on the right, an unmarked trail on the left leads to a panoramic viewpoint over the Hudson River, with the Alpine Boat Basin visible directly below.. 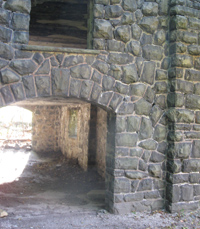 Over the next mile, you’ll pass by more old stone foundations and walls. These are the remains of large estates that once graced the Palisades cliffs. The properties on which these estates formerly stood were acquired by the Park for the construction of the Parkway.

About a mile south of the trailhead, as the trail descends stone steps and then turns right at a T-intersection, you’ll notice the stone ruins of a large building on the left. This was the “Cliff Dale” estate of George Zabriskie, built in 1911 (the date is still visible in the stonework of the building). The ruins that remain are only the basement portion of the building. Use caution if you wish to explore the ruins of this once-magnificent structure.

In another two-thirds of a mile, you’ll reach the Alpine Lookout, with outstanding views over the Hudson River. The trail follows a paved sidewalk along an iron railing around the perimeter of the lookout. This was the site of the “Rio Vista” estate, the home of Manuel Rionda (his manor house was located just south of the lookout). After reentering the woods, the trail reaches a fenced-in parapet that juts out over the river, with even better views up and down the river.

In another third of a mile, the trail approaches the Parkway. Just ahead, a sign and three red blazes mark the start of the Huyler’s Landing Trail. Bear left and follow this red-blazed trail, which descends to the river along the route of an old road, which has largely narrowed to a footpath. After a sharp switchback to the right, the trail emerges on the paved Henry Hudson Drive. Turn left, follow the paved road for about 300 feet, then bear right at an opening in the stone parapet (often chained off) and continue to descend on a wide woods road.

You’ll reach the river at an old picnic area, with an abandoned stone jetty just ahead. 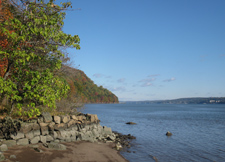 An historical sign points out that the Huyler’s Landing Trail was the route used by British troops to scale the Palisades cliffs on November 20, 1776. Turn left and follow the white-blazed Shore Trail, which follows a path between the cliffs on the left and the river on the right, passing several former beaches along the river. In half a mile, the trail climbs stone steps and follows a path above the river level. Along the way, it dips down to river level, then again climbs to a wide path above river level. After crossing a wooden bridge over a stream (and just before reaching a second wooden bridge), you’ll pass a plaque affixed to a rock on the left in memory of John Jordan, the first Superintendent of the Park, who died here in 1915.

A short distance beyond, you’ll reach a grassy area at the southern end of the Alpine Boat Basin. Continue north through the parking area for the boat basin, then proceed past the historic Kearney House, a small white building on the left. This house is the oldest building in the New Jersey section of the park. The oldest part of the house – which once served as headquarters for the park – dates back to the eighteenth century. 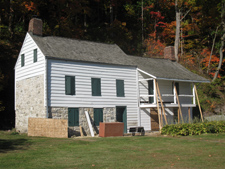 Just beyond the Kearney House, you’ll notice a plaque on the left entitled "Old Alpine Trail," which states that the trail you are about to use to climb the Palisades was used by British troops in 1776 during the American Revolution. (As an adjacent sign points out, the information on this plaque is no longer considered to be historically accurate.) Bear left here and climb the old stone-paved road. At the top of the rise, turn sharply left and continue uphill on the road, now marked with the orange blazes of the Closter Dock Trail, which climbs on switchbacks. In two places, side trails go off to the left, but in each case, turn sharply right to continue along the Closter Dock Trail. When you reach the underpass on the left, proceed straight ahead (do not turn left) and continue to the Administration Building, where the hike began.