Take N.J. Route 17 north to the New York State Thruway and take the first exit, Exit 15A (Sloatsburg). Turn left at the bottom of the ramp onto N.Y. Route 17 north, and continue through the Village of Sloatsburg. Just past the village, turn right at the traffic light, following the sign for Seven Lakes Drive/Harriman State Park. Follow Seven Lakes Drive for about 8 miles to the parking area for Lake Skannatati, on the left side of the road. The turnoff to the parking area is 0.7 mile beyond the Kanawauke Circle.

From the kiosk at the northwest corner of the parking lot, bear left and follow the aqua blazes of the Long Path along the north shore of the lake on a rocky footpath through a mountain laurel thicket. In about 0.4 mile, the trail bends away from the lake and crosses Pine Swamp Brook on large rocks. After passing by a huge rock ledge on the right, the trail proceeds through dense thickets of mountain laurel and blueberry. It then climbs to a junction with the yellow-blazed Dunning Trail.

Bear left and follow the joint Long Path-Dunning Trail for about 100 feet, then bear right where the trails diverge, continuing on the aqua-blazed Long Path. Just before reaching a massive boulder (known as Cape Horn), you'll see remnants of 19th century mining activity below on the left. Directly below the trail is a shaft of the Hogencamp Mine, which was active from 1870 to 1885. Use caution if you wish to explore this interesting area. 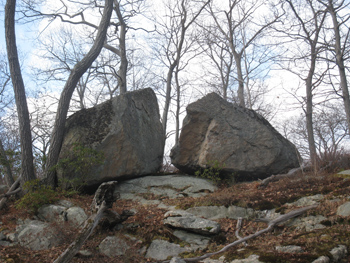 The Long Path now begins to climb, passing a split boulder on a hill to the left. After a level section through a valley, the trail climbs slightly and passes stone foundations. A tramway from the Hogencamp Mine, used to transport the iron ore to a mine road, passed through this valley, and the stone foundations are probably remnants of structures built for the tramway.

In half a mile (2.5 miles from start of the hike), you'll reach the northern end of the yellow-blazed Dunning Trail. Continue ahead on the A-SB Trail, which crosses a stream below an attractive cascade. Just beyond the stream crossing, you'll notice a large rectangular cut in the hillside to the left of the trail. This excavation is part of the Pine Swamp Mine, another mining venture in the area, which was opened about 1830 and was worked intermittently until 1880. As you continue along the trail, several other excavations and open pits (now filled with water) may also be seen.

Just beyond these mine openings, the trail bears right and descends into the woods. Soon, you will pass a stone wall and several stone foundations to the left of the trail. These are remnants of the village that once housed the workers at the nearby mine.

After passing the northern end of the Pine Swamp, the A-SB climbs gradually and levels off along a shoulder of Pine Swamp Mountain. It soon reaches a junction with the Red Cross Trail, which begins on the left. Continue along the A-SB Trail, which now descends gradually, with views to the left of Lake Askoti when the leaves are down. At the base of the descent, you'll reach the parking lot at Lake Skannatati, where the hike began.