Take I-80 west to Exit 56 (Squirrelwood Road, Woodland Park). Turn left at the bottom of the ramp onto Squirrelwood Road. (If you are coming from the west, take Exit 56A and proceed south on Squirrelwood Road.) Continue south along Squirrelwood Road for 1.3 miles (after 0.5 mile, the road changes its name to Rifle Camp Road). Just beyond the entrance to "The Franklin Group/Mountain Ridge Tower," turn left into Rifle Camp Park. Continue along the park entrance road for 0.8 mile to its end at a circle, where parking is available.

This hike follows the yellow-blazed Rifle Camp Trail in a counter-clockwise direction. From the circle, proceed uphill on a paved path, following both yellow and red blazes, and pass the park’s Nature Center on the right. Just beyond, the trail bears left and reaches an expansive overlook to the east and south, with Clifton and Bergen County visible directly below, and the New York City skyline in the distance. 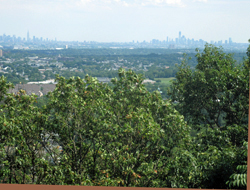 In another 400 feet, follow the yellow blazes as they bear right, leaving the paved path, and continue parallel to the fence that runs along the cliff line.  After bearing left, away from the cliff line, the trail crosses a seasonal stream and joins a woods road.

Soon, the yellow trail begins to run along a black metal fence, with a large red-roofed building beyond the fence. In about 500 feet, it bears left, away from the fence, and heads through the woods. The yellow trail turns right onto a gravel road, crosses a stone culvert over a stream, and joins another gravel road that comes in from the left. Just ahead, it curves left, with a large apartment building visible beyond a black metal fence on the right. A short distance beyond, the yellow trail turns right, leaving the gravel road, and continues on a footpath.

Almost a mile from the start, the yellow trail crosses the paved park entrance road and reenters the woods on a footpath, paralleling a valley below on the right. After passing a grassy amphitheater and a small building on the left, the yellow trail descends on a gravel road into the valley, where it begins to climb. Near the top, the trail bears right, leaving the eroded gravel road, and continues on a footpath.

After passing picnic tables and a playground on the left, the yellow trail turns right and descends on a paved path, rejoining the red-blazed trail. It curves right at the base of the descent, passing a fenced-in dog park on the left, and soon continues on a gravel path. With the Great Notch Reservoir visible ahead, the trail bends left and crosses a stone culvert over a stream. After making several turns, it bears right at a fork (leaving the red-blazed trail) and continues on a wide footpath. Just ahead, the trail follows a woods road along a berm, with a ditch on the left. Soon, the trail passes between interesting basalt rock formations, bears right, and passes above a steep cliff.

The trail now descends, passing below a massive rock formation on the right, and follows another berm. Soon, it begins to parallel a high chain-link fence on the right, with the Great Notch Reservoir visible beyond. It follows the chain-link fence for about half a mile, with views of the reservoir through the fence on the left. At the end of the reservoir, the trail bears right, passing a spillway, then descends a little and parallels the reservoir’s outlet stream. The trail now climbs a little and curves left, then bears right and continues on a footpath through the woods. 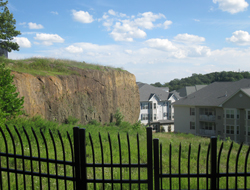 Just ahead, the yellow trail comes out at a black metal fence, with a cliff ahead on the left and a housing development (built on the site of a former quarry) below. The trail continues to follow along the fence line for the next half mile. At first, you mostly see the housing development below, but after turning right and climbing a little, you reach some good views of the New York City skyline. Benches have been placed along this section of the trail, permitting hikers to pause and admire the views. Finally, the trail turns left, away from the fence, and descends on a gravel path to a T-intersection with a gravel road. It turns right onto the road, which curves around a pond and becomes a wide paved path. About 200 feet beyond the end of the pond, the yellow trail turns right, leaving the paved path, and climbs to reach a low chain-link fence, with an unobstructed panoramic view of the New York City skyline. The yellow trail continues along the fence, then descends on a gravel path to come out at the paved circle where the hike began.