Take I-287 to Exit 30B. At the first traffic light, turn right onto Route 202. Proceed north for 1.8 miles, and turn left onto Tempe Wick Road at a traffic light. Continue along Tempe Wick Road for 1.4 miles to the park entrance on the right side of the road. You’ll pass the visitor center parking area on the left (you may wish to stop at the visitor center to view the exhibits or obtain a map), but proceed ahead onto the Tour Road. Bear left at the parking area for the Wick House; bear right at the parking area for the Soldiers’ Huts. When you reach a stop sign near a circular building, turn right and continue to the Trail Center parking area, on the right side of the road.

From the northern end of the parking area, head north along the right edge of a grassy area. In 75 feet, you’ll see a Patriots’ Path blaze (dark blue river-and-tree logo), and in another 100 feet, you’ll reach Signpost #26 (trail junctions in this park are marked by numbered signposts, which will be referred to in the hike description).

Following a sign for the Camp Road Trail, cross the stream on a wooden footbridge, then immediately turn left onto a narrow dirt path that heads north. You’re now following the route of the Blue Trail, with the stream on your left and the paved road on your right. Soon, the Blue Trail bears right and climbs above the stream, continuing to parallel the road on the right. 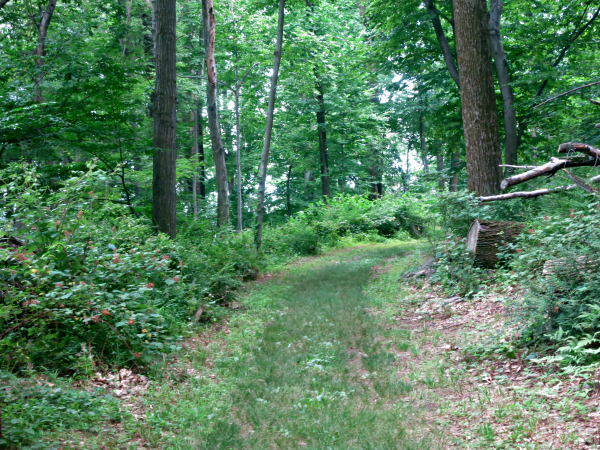 In about a third of a mile, you’ll reach Signpost #24. Turn left here and follow the paved road for about 200 feet, then turn right just before a circular restroom building. You’ll pass Signpost #23 and continue ahead on a woods road, designated the New York Brigade Trail. The trail descends gradually to reach Signpost #22, where it joins the white-blazed Grand Loop Trail, which comes in from the right. The joint white/blue trail follows a wide dirt road and passes a small pond on the right. A bench has been placed here, making it an attractive spot for a break.

A short distance ahead, you’ll reach a T-intersection, marked by Signpost #10. Here, the white trail leaves to the left, but you should turn right, following the blue blazes. The Blue Trail crosses a culvert over a stream and begins a gradual ascent. It bears right at the next Y-intersection (Signpost #11) and continues to climb. Then, at Signpost #12, the Blue Trail bears left, joining the Mt. Kemble Loop Trail. A short distance ahead, the trail passes a locked gate and reaches a T-intersection (Signpost #14).

The Blue Trail turns right, passing a private house on the left (the road you are now following runs close to the park boundary). Just ahead, follow the blue blazes carefully as the trail first bears left at a Y-intersection, then proceeds straight ahead at Signpost #15 (do not follow the road that descends to the left) and passes a locked gate. 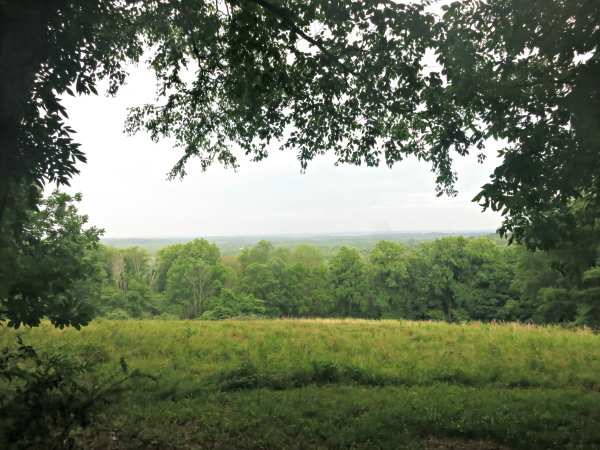 The trail continues along a wide grassy road. In a third of a mile, you’ll pass on the right a stone monument and an interpretive sign which commemorate Stark’s Brigade. Just beyond, you’ll reach an expansive east-facing viewpoint, accompanied by an interpretive sign and a bench, on the left. This is another good spot to take a break.

Soon, the trail begins to descend. Continue ahead at Signpost #16, where an unmarked path goes off to the left, but when you reach Signpost #17, turn sharply left, following the blue blazes and a sign for the Camp Road Trail. At the next intersection, marked by Signpost #19, turn sharply right, joining the Camp Road Trail, which descends steadily. Then, at the base of the descent, you’ll reach Signpost #20, where the white-blazed Grand Loop Trail and the Patriots’ Path (marked by a distinctive river-and-tree logo) join from the left.

The joint trails continue ahead, crossing a stream on a wide wooden bridge. Just beyond, the white trail leaves to the right at Signpost #21. Continue ahead, following the blue blazes and the Patriots’ Path logo blazes, until you reach a locked gate (Signpost #27) by the paved road. Turn left and follow the road a short distance back to your car.