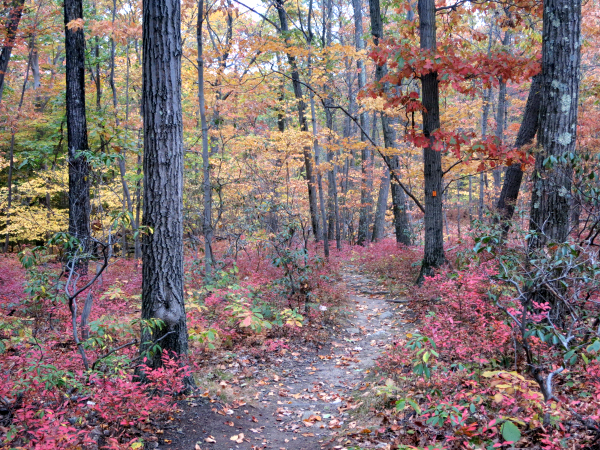 From the parking area, cross Skyline Drive. You will see a triple purple-on-white blaze on a tree, which marks the start of the Tamarack Loop. Turn right onto the gravel road that leads into Camp Tamarack, then immediately turn left and follow the purple-on-white blazes downhill on a winding footpath. At the base of the descent, turn right at a T-intersection, then bear left, skirting the ruins of the former rifle range of the camp. Here, the Tamarack Loop turns right, but you should continue straight ahead, now following the orange blazes of the Schuber Trail. The Schuber Trail crosses Tamarack Brook on a wooden footbridge, climbs over a knoll, and descends to cross another stream on rocks.

In another quarter mile, you’ll reach a junction with the white-blazed Millstone Trail near the crest of a rise. Turn right onto the Millstone Trail, which climbs to a narrow valley known as Rocky Slide Gulch. Here, it turns right, then curves left and continues to climb. After a relatively level section, it passes to the left of a huge boulder known as Sitting Hen Rock, then bears right and resumes its ascent. Just beyond the crest of the hill, the trail reaches the Southwest Lookout.

From the lookout, the Millstone Trail bears left, descends slightly, then climbs to reach a balanced rock in an open area. A patch of prickly pear cactus, which blooms in early July, may be seen nearby. Again, the trail bears left and descends.  Soon, the Yellow Trail (marked with yellow diamond blazes) joins from the right and, in about 50 feet, both trails pass (on the right) several abandoned millstones in various stages of completion. This area was once the site of a millstone quarry, and the stones that you see were damaged during quarrying or abandoned when the quarry operation shut down. The yellow and white trails continue to descend on a winding footpath. After crossing an old woods road at a sign “HT 12,” you’ll notice a millstone in nearly perfect condition just to the right of the trail. 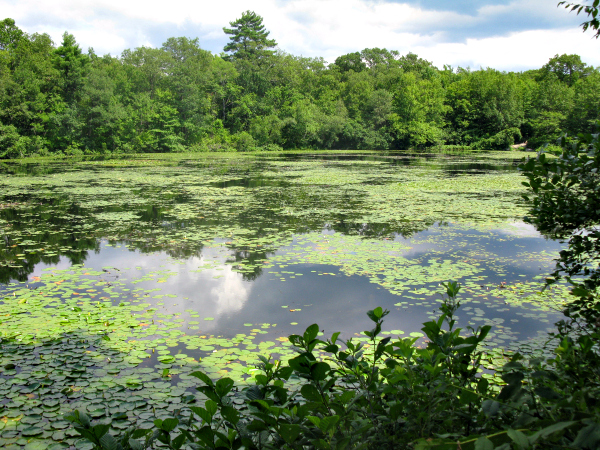 After examining this millstone, turn around and head uphill, retracing your steps back to the junction of the Millstone and Yellow Trails. (If you reach the paved access road to Camp Glen Gray, you’ve gone too far and should turn around and return to the junction.) At the junction, bear left to continue on the Yellow Trail. The trail soon crosses several stone walls and begins a steady descent. On the way down, you can see the eastern ridge of the Ramapo Mountains through the trees, and the New York City skyscrapers may be visible on the horizon on a clear day.

Towards the base of the descent, the trail parallels a stone wall on the left. It then bears right and traverses a rocky area. After a short, steep descent, it crosses a stream on rocks (with an attractive cascade to the right), then climbs to another stream and bears left to cross it.

The trail now climbs steadily. After a level stretch at the top of the rise, a municipal water tower may be seen through the trees ahead. The trail now curves to the right and descends towards Todd Lake. Soon, the Yellow Trail ends at a junction with the purple-on-white Tamarack Loop. Continue ahead (downhill), now following purple-on-white blazes. After passing cliffs on the left, the trail turns right, climbs a little, then descends towards Todd Lake. Soon, the trail reaches a stone wall on a rock ledge at water level, with a view over the lake, and continues to parallel the lake. Near the lake’s south end, the Tamarack Loop turns right, away from the lake. A short distance ahead, it reaches a woods road.