Take the New York State Thruway to Exit 18 (New Paltz). After paying the toll, turn left onto Route 299 and continue west through the Village of New Paltz. When you cross the bridge over the Wallkill River at the west end of the village, continue ahead on Route 299 (do not turn right towards the Mohonk Mountain House). In another 5.5 miles (from the Wallkill River bridge), Route 299 ends at a T intersection with Route 44/55. Turn right here and follow Route 44/55 for half a mile to the Mohonk Preserve Visitor Center, on the right side of the road. Stop at the visitor center to purchase a pass, obtain a free map and view the interesting exhibits. Then continue ahead on Route 44/55. The road makes a very sharp hairpin turn and climbs to Trapps Bridge (a steel overpass). Continue for 0.3 mile past the Trapps Bridge and turn right into the West Trapps Trailhead Parking Area.

From the eastern end of the parking area, follow the West Trapps Connector Trail, which leads east, parallel to Route 44/55. In about a quarter of a mile, you’ll reach the Trapps Bridge, where a stairway leads up to the Undercliff and Overcliff Roads. 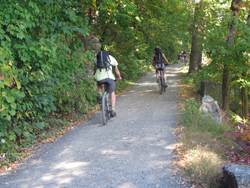 At the top of the stairs, turn left (do not cross the bridge), then immediately turn right at the junction ahead, passing between two huge boulders. You’re now following the Undercliff Road, completed in 1903 by the Smiley family, who owned and operated the nearby Mohonk and Minnewaska Mountain Houses. This road is part of an extensive network of gravel roads built by the Smileys for horse-drawn carriages, but used today for walking and bicycling (and, during the winter, for cross-country skiing and snowshoeing).

The road descends gently, soon passing a panoramic viewpoint over the farmlands of the Wallkill River valley. To the left are spectacular cliffs of Shawangunk Conglomerate – a world-famous site for rock climbers. Rock climbing is allowed in the Mohonk Preserve by permit, and you’ll probably see climbers on the cliffs to the left. Soon, you’ll pass a kiosk and a restroom, and the road begins to move slightly away from the cliffs. Just beyond, the East Trapps Connector Trail begins on the right.

Continue ahead along the now level, relatively straight Undercliff Road. You’ll notice yellow-blazed trails on the left, which lead to various rock climbing routes. Openings in the vegetation on the right afford many views over the Wallkill Valley. Occasionally, huge blocks of conglomerate overhang the road or provide sheltered rest areas alongside the road.

In about 1.5 miles, the road enters denser woods and makes two sharp turns. Then, 2.3 miles from the start, you’ll reach a complex junction of five carriage roads at the stone Rhododendron Bridge. Laurel Ledge Road is straight ahead, but you should turn left onto Overcliff Road (marked by a sign) (do not cross the bridge).

Overcliff Road climbs gently through a series of curves to reach the west side of the Trapps Ridge. Along the 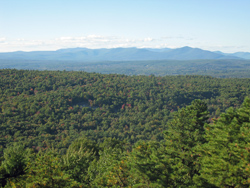 way, it passes lichen-covered cliffs of Shawangunk Conglomerate. The name "overcliff" is somewhat of a misnomer, as the trail does not run atop the cliffs, but once it levels off, it passes several viewpoints to the north over the Rondout Valley, with the peaks of the Catskills visible in the distance. Ronde Barre and Dickie Barre may be seen to the northwest. The vegetation along Overcliff Road is largely a mix of pitch pines and scrub oak.

About 1.5 miles from Rhododendron Bridge, the road enters denser woods and begins a gentle descent. After a series of curves, the road passes a viewpoint over the Lost City cliffs on Dickie Barre. The sounds of traffic on Route 44/55 below can now be heard, and Overcliff Road soon reaches the Trapps Bridge junction. Turn right here, then turn right again, descend the steps, and follow the connector trail back to the parking area.