Take the Palisades Interstate Parkway north to Exit 5N (NY 303/Orangeburg). Proceed north on NY 303 for 2.1 miles and bear right at a fork onto Greenbush Road North (do not turn very sharply right at the first intersection with Greenbush Road at 2.0 miles). Continue on Greenbush Road for 1.2 miles to the parking area for Buttermilk Falls County Park, on the right.

The trail now bears right and continues to climb. After a brief descent, you’ll reach a limited west-facing viewpoint, with a field visible below. Continue ahead uphill on the blue trail, and you’ll soon come to a broader viewpoint from a rock outcrop to the right of the trail. You may hear and see a train along the West Shore railroad tracks running parallel to the hills in the background. 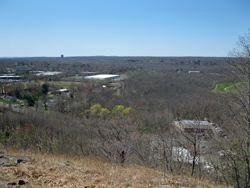 After a little more climbing, you’ll reach a T-junction with a woods road. Turn right and continue along the blue-blazed trail for about 150 feet to a third viewpoint, with the broadest view. You can see all the way west to Ramapo Mountains and, on a clear day, the skyscrapers of Newark are visible on the horizon to the south.

Retrace your steps to the junction and continue ahead on an orange-blazed trail, which begins here. The trail soon bears left at a fork and descends on a footpath to cross a stream on rocks. It then climbs slightly to cross paved Schuyler Road. On the other side of the road, the orange-blazed trail crosses a lawn and reenters the woods. Almost immediately, it turns sharply left and descends steeply. It then bears right and parallels a large storm water retention area behind a fence on the left. This portion of the trail may be very wet in rainy seasons.

Beyond the fence, the orange-blazed trail bears right and ends at a junction with a white-blazed trail. Turn left onto the white-blazed trail, which parallels the east side of the storm water retention area. It crosses a wet area and a stream on rocks and begins a steady climb parallel to the fence, passing through an area with many fallen trees. After reaching the end of the retention area, the trail bears right, reenters the woods and continues to climb. Just beyond a short level stretch, the white-blazed trail ends at a junction with the aqua-blazed Long Path. Turn right onto the Long Path and continue to climb, passing through a gap in an old stone wall near the crest of the rise. Here, a bench on the left affords a view through the trees (in leaf-off season) over the Hudson River, and a plaque on a rock memorializes Sean Hunter Ryan, after whom this park is named.

After another level section, the Long Path descends to cross paved Bradley Hill Road diagonally to the right. It reenters the woods, climbing gradually. As the trail approaches the crest of the rise, there are views through the trees to the left over the Hudson River and the Tappan Zee Bridge. 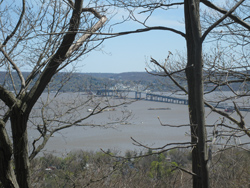 The Long Path descends to cross a macadam road, then climbs again, soon reaching another viewpoint on the left over the Hudson River and the Tappan Zee Bridge. The trail then levels off. After a short descent, the trail climbs railroad tie steps and reaches a junction with a red-blazed trail, which begins on the right. You’ll be continuing on this red-blazed trail, but first proceed ahead on the Long Path for another 150 feet to an expansive south-facing viewpoint from a graffiti-scarred rock, with the New York City skyline visible in the distance.

After taking in the view, retrace your steps and bear left onto the red-blazed trail, which crosses Tweed Boulevard, climbs slightly, then begins a steady, gradual descent, with some views through the trees to the left. In 0.4 mile, you’ll notice a white-blazed trail that begins on the left, but you should continue ahead on the red-blazed trail.

As the road bears left near the base of the descent, watch carefully for a turn where the white blazes turn right, leaving the road. Continue to follow the white-blazed trail, which descends stone steps, crosses a boardwalk, and soon ends at the parking area where the hike began.