Cross to the east side of the road and follow the blue-blazed Escarpment Trail (co-aligned with a yellow-blazed horse trail) into the woods. The trail heads south and descends through a mixed forest of hemlocks and deciduous tree 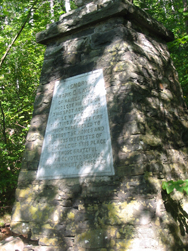 In half a mile, the trail crosses two old railroad rights-of-way and a bridge over the outlet of North/South Lake. After crossing another bridge, you'll reach a four-way junction. Here, you turn right, continuing to follow the blue blazes of the Escarpment Trail along a woods road, with the stream below to the right. You'll soon pass a trail register (please sign) and cross a short footbridge.

A short distance beyond, the trail turns left, leaving the road, and begins a steady climb. After leveling off, it begins to descend, first gradually, then more steeply. At the base of the descent, a stone monument on the left memorializes Frank Layman, a firefighter who lost his life here in August 1900.

You've now reached the edge of the escarpment, which you'll follow for the next mile and a half. The trail turns left here, and in a short distance, it turns left again and begins to climb. In 500 feet, after a steep climb up a large rock, it reaches a panoramic viewpoint. Kaaterskill Clove - which you traversed to get here - is directly below, Kaaterskill High Peak and Roundtop tower above the clove to the south, and the small community of Twilight Park may be seen to the right. 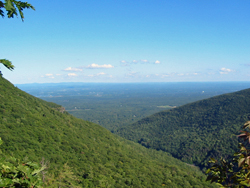 A little further along, you’ll pass another expansive viewpoint on the right, and then you’ll climb to a third viewpoint with a more limited view. Just beyond, the trail climbs steeply, then more gradually, and it reaches a junction with a yellow-blazed connector trail that begins on the left.

Continue ahead on the blue-blazed trail, which shortly emerges onto Sunset Rock (marked by a sign), with a somewhat limited south-facing view. After a short level stretch, the trail descends steeply over rock ledges to reach Inspiration Point (Trail Conference Map 141 labels this viewpoint as "Sunset Rock" and the following viewpoint as "Inspiration Point"). Here, two large flat rocks with carved inscriptions (some of which date back over 100 years) afford panoramic views to the west and south. Be careful when approaching the edge, as the drop is precipitous!

A short distance beyond, you'll reach a broad viewpoint to the east over the Hudson River valley, with the Taconic Mountains beyond. For the next quarter mile, the trail continues to run very close to the edge of the escarpment, with more views. 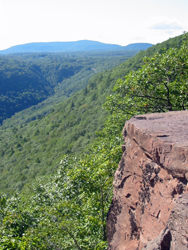 About three-quarters of a mile beyond Inspiration Point, you'll come to a T-intersection with a yellow-blazed horse trail. Turn right, now following both blue and yellow blazes, and in 300 feet, turn left, continuing to follow the blue- and yellow-blazed trail. In the next half mile, you'll gradually climb about 200 vertical feet.

At the next junction, the blue-blazed Escarpment Trail turns right, but you should bear left, now following the red-blazed Schutt Road Trail and the yellow-blazed horse trail. In 60 feet, turn left, continuing to follow the red and yellow blazes.

In the next mile, you'll descend gradually along an old carriage road, passing the end of the yellow-blazed connector trail on the left. The Schutt Road Trail ends at the four-way junction that you passed towards the start of the hike. Continue ahead, immediately crossing a bridge, and follow the blue-blazed Escarpment Trail back to the parking area where the hike began.