Take the New York State Thruway to Exit 15A. Turn left at the bottom of the ramp onto N.Y. Route 17 and head north, through Sloatsburg and Tuxedo. Continue for about 2.5 miles beyond the village of Tuxedo to a traffic light at the intersection of N.Y. Route 17A. Bear left at the traffic light and continue up the ramp, then turn left at the top of the ramp onto Route 17A. Follow Route 17A west for 5.5 miles to the parking area for the Sterling Ridge Trail, on the left side of the road, just beyond a green-and-white sign indicating a hiker crossing. Follow the dirt road past the gate (which is normally left open) to a large parking area in a grassy field.

From the rear of the parking area, go around the gate and follow the woods road which leads south. This road is marked with the blue-on-white blazes of the Sterling Ridge Trail, the teal diamond blazes of the Highlands Trail and the yellow blazes of the Sterling Valley Trail. Follow the road for only about 100 feet, then leave the road and turn right onto a footpath, following the blue-and-white and teal diamond blazes (the yellow blazes continue ahead on the road). The trail climbs over a small rise and then levels off. Soon, the trail begins to run along the edge of a ravine, gradually descending, with limited views to the left through the trees. The trail crosses a seasonal stream and then begins to ascend. About a mile from the trailhead, you will cross under a power line, with good views on both sides of the trail. 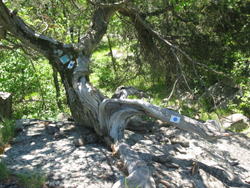 After a short but steady ascent, the trail crosses a large rock outcrop. The trail continues along the ridge, now following a relatively level route. In about half a mile, you’ll come out on another large rock outcrop, with a limited east-facing view. After another level stretch, the trail continues on undulating terrain and then emerges onto a third rock outcrop, with an interesting stunted evergreen tree growing out of a crack in the rock. There are only very limited views from the outcrop, but after a brief descent, you’ll reach a panoramic viewpoint over Sterling Lake to the east, with a log supported by stones serving as a bench.

The trail continues along the ridge. After descending a little, it crosses a woods road – the route of the orange-blazed Bare Rock Trail. The trail then climbs to another, more limited viewpoint over Sterling Lake from open rocks. It continues over undulating terrain, and after traversing an area dominated by hemlock and mountain laurel, reaches a ranger cabin and the Sterling Forest Fire Tower, about 3.5 miles from the start of the hike.

The view from the top of the fire tower, built in 1922, is well worth the climb. It 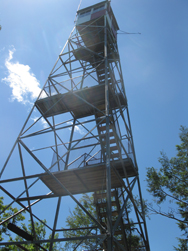 provides an expansive view over the entire Sterling Forest. Sterling Lake is visible to the northeast, and a portion of the much-larger Greenwood Lake can be seen to the west. A picnic table at the base of the tower makes it a good place to stop for lunch.

When you're ready to continue, head east on the white-stripe-on-red-blazed Fire Tower Trail, which descends from the ridge on a pleasant gravel road, with many grassy sections (do not follow the joint Fire Tower/Sterling Ridge Trail, which heads south on a footpath). After about a mile, as the road levels off, you’ll come to a junction. The Fire Tower Trail turns off to the right on a branch road, but you should bear left and continue ahead on the main road, now marked with red-triangle-on-white blazes as the Fire Tower Connector Trail. The trail continues to descend, and after passing a private residence and going around a locked gate, it ends at a paved road, near the shore of Sterling Lake.

Turn left and then go straight ahead on the road -- marked with the blue blazes of the Sterling Lake Loop -- as the paving ends and the road is blocked by a cable barrier. Soon, the road begins to follow the scenic shoreline of Sterling Lake. In about three-quarters of a mile, you’ll come to a Y-intersection. Bear left here and follow the yellow-blazed Sterling Valley Trail, another woods road that leads slightly uphill, away from the lake. After a level stretch, the road begins to climb. It passes under the same power line that you crossed earlier in the hike, and then continues to ascend steadily. In about a mile and a half, it ends at the parking area where you began the hike.