Take N.J. Route 17 north to the New York State Thruway and take the first exit, Exit 15A (Sloatsburg). Turn left at the bottom of the ramp onto N.Y. Route 17 north, and continue through the villages of Tuxedo and Southfields. About two miles north of Southfields, turn right onto Arden Valley Road. In 0.3 mile, after crossing the bridge over the New York State Thruway, make the first right turn onto a paved road and continue to a parking area on the west side of a large meadow, known as the Elk Pen.

Take the Short Line bus from the Port Authority Bus Terminal in New York City (buy a ticket to Southfields).  Tell the bus driver to let you off at Arden Valley Road (about two miles north of Southfeilds). Head east on Arden Valley Road for 0.3 mile, crossing the bridge over the New York State Thruway, and make the first right turn onto a paved road. Continue to a parking area on the west side of a large meadow, known as the Elk Pen.

Getting to Lemon Squeezer. From the east side of the parking area, follow the white-blazed Appalachian Trail (A.T.) across the meadow (the route is marked by posts). At the end of the meadow, you will notice three red-triangle-on-white blazes which mark the start of the Arden-Surebridge (A-SB) Trail. Turn right and follow the joint A-SB/A.T. south for about 100 feet, where you will see a wooden sign on the left giving mileages along the A.T.

Turn left onto the A.T., which you will be following for the next two and one-half miles. The A.T. begins a steady ascent of Green Pond Mountain, first moderately, then more steeply. After climbing on switchbacks, you’ll reach the summit of the mountain, where a large boulder to the left of the trail affords limited west-facing views. You’ve climbed over 500 vertical feet to reach this point. After a relatively level stretch, the A.T. descends the eastern slope of the mountain on switchbacks.

At the base of the descent, follow the A.T. as it turns left onto Island Pond Road, a dirt road built by Edward Harriman (after whom the park is named) about 1905. You’ll soon enter a beautiful hemlock grove. After only about 500 feet on Island Pond Road, the A.T. turns right, goes over a small rise, and crosses a gravel road built in the 1960s to provide access for fishermen to Island Pond. The trail descends to cross an outlet of the pond on a small wooden bridge. The stone spillway you see was built by Civilian Conservation Corps workers in the mid-1930s as part of a plan to increase the size of Island Pond by damming it. The work was never completed, though, and the pond remains in its natural state..

The A.T. now ascends to a knoll, with a limited view of Island Pond. On the way, you will pass a cylindrical rusted metal object on the right.. 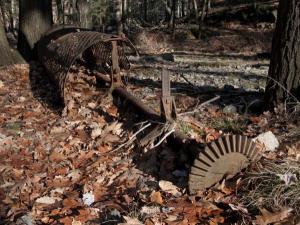 This was a rotary gravel sorter, used to separate different sizes of gravel. The trail then descends and turns right on another woods road, known as the Crooked Road. After a short distance, the white blazes leave to the left and climb to a junction with the A-SB Trail, marked with red triangles on a white background. Bear left at the junction and follow the joint A.T./A-SB a short distance to the base of a large rock formation, where the two trails split.

This rock formation, known as the Lemon Squeezer, is one of the most interesting features of the park. Turn left and follow the A.T. as it climbs through a very narrow passage between the rocks and then goes up a steep rock face, where you will need to use both your hands and your feet. Those who are physically able to negotiate these challenges will find them to be a highlight of the hike. But if the climb is too difficult, it is possible to bypass the Lemon Squeezer by following a path to the left.

After reaching the top of the Lemon Squeezer, the A.T. continues on a more moderate grade to the summit of Island Pond Mountain. The stone ruins on the left, just north of the summit are the remains of a cabin built by Edward Harriman. This is a good place to stop and take a break.

The A.T. descends from the mountain and enters a hemlock grove. After winding through the hemlocks, you will reach a junction with the aqua-blazed Long Path, marked by a wooden signpost. Turn right, leaving the A.T., and follow the Long Path as it skirts the edge of the Dismal Swamp. The ridge visible across the swamp to the east is Surebridge Mountain.

A short distance beyond the outlet of the swamp, crossed on tree roots, you will come to a woods road -- the route of the A-SB Trail (now encountered for the third time). Turn left onto the road, and in 50 feet you will see three horizontal white blazes with the letters “WB,” marking the start of the White Bar Trail. Turn right, leaving the road, and follow the White Bar Trail, which continues through an area with many ferns and young trees. In a quarter mile, it turns left onto a woods road – the continuation of the Crooked Road that you followed earlier in the hike. After passing a wetland on the left, the White Bar Trail climbs gently through a wide valley, then levels off.

A short distance beyond, the yellow-blazed Dunning Trail joins from the left. Bear right, now following both white and yellow blazes. When the two trails separate in a quarter mile, turn right and follow the yellow blazes of the Dunning Trail. After passing a large cliff on the right, the trail descends to a col, ascends a rise, and descends to the base of the Boston Mine. This iron mine -- a large open cut into the hillside, partially filled with water -- is reached by a short path to the right. It was last worked around 1880.

After visiting this mine, continue ahead on the yellow-blazed Dunning Trail. In 500 feet, you will reach a wide woods road – the southern end of Island Pond Road. Turn right, leaving the yellow-blazed trail, and follow the unmarked Island Pond Road as it descends through hemlocks and laurels towards Island Pond. When you briefly encounter the red-triangle-on-white blazes of the A-SB Trail, proceed ahead, bearing right at the fork, and follow an unmarked woods road that heads towards the southern tip of Island Pond.

After passing through mountain laurel and evergreens, you’ll arrive at the ruins of a stone building, built by the park as a ranger station. Just beyond, a rock ledge affords an expansive view over scenic Island Pond. This is a great spot to rest and take a break.

When you’re ready to continue, retrace your steps along the road to the junction with the A-SB Trail. This time, bear right and follow the A-SB as it heads west, crossing the southern outlet of Island Pond and passing through a region where young hemlocks and pines are beginning to revegetate an area damaged by a forest fire.

Just beyond, a short side trail on the right leads to open rocks, with views to the west and north. The A-SB Trail now turns right and begins to run along a ledge, with a fairly steep drop on the left. After passing by an overhanging rock, it turns sharply left and soon begins a rather steep descent. At the base of the steep descent, it bears left, crosses a stream, then turns right and levels off. Soon, it again begins to descend, but on a more moderate grade.

After crossing another stream, you’ll reach an old woods road – the Old Arden Road – at the base of the descent (the road here has narrowed to a footpath). The red-stripe-on-white blazed Stahahe Brook Trail begins on the left, but you should turn right and continue to follow the A-SB Trail northward along the road.

As you head north along the road, you’ll notice remnants of an old wire fence on the left. This fence was built to enclose an area once inhabited by elk brought from Yellowstone National Park in 1919. The elk did not thrive, and the small remnant of the herd was relocated in 1942. The area formerly enclosed by the fence, though, is still known as the Elk Pen.

In a third of a mile, the A.T. joins from the right and the A-SB Trail ends. Turn left and follow the A.T. across the meadow back to the Elk Pen parking area, where the hike began.