Take N.J. Route 17 north to the New York State Thruway and take the first exit., Exit 15A (Sloatsburg). Turn left at the bottom of the ramp onto N.Y. Route 17 north, and continue through the Village of Sloatsburg. Just past the village, turn right at the traffic light, following the sign for Harriman State Park. Cross an overpass over railroad tracks and continue along the Seven Lakes Drive, passing under the Thruway overpass, and soon entering Harriman State Park. Proceed for another mile to the Reeves Meadow Visitor Center, on the right side of the road. Park in the Visitor Center's parking lot.

About a mile and a half from the start, you'll reach a T-intersection with a woods road. The orange-blazed Hillburn-Torne-Sebago (HTS) Trail begins on the right, but you should turn left to continue along the blue-on-white-blazed Seven Hills Trail, which begins a rather steep ascent. The grade soon moderates, then again steepens.

After spending some time enjoying the view, retrace your steps to the junction with the Seven Hills Trail. Now continue ahead, following the joint HTS/Seven Hills Trail along the ridge, blazed with both orange and blue-on-white blazes.

In 0.2 mile, at a high point on the ridge, the two trails split.  Bear left and follow the blue-on-white b 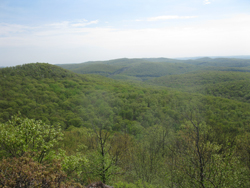 lazes of the Seven Hills Trail, which descends steeply into a gully, then climbs back up to reach a west-facing viewpoint, known as Torne View. From here, the Ramapo Torne, which you just climbed, is visible to the left. The view from this vantage point is far more pristine than that from the Ramapo Torne!

Just beyond Torne View, you'll reach a junction with the black-on-white-blazed Raccoon Brook Hills Trail, which begins on the right. Continue ahead, following the blue-on-white blazes of the Seven Hills Trail, which soon begins to descend.