Take the Palisades Interstate Parkway north from the George Washington Bridge. Continue for 1.7 miles beyond Exit 2, and turn right at a sign for the State Line Lookout. Follow the access road for about half a mile until it ends at a large parking lot near the lookout. (If you are coming from the north on the Parkway, bear left just beyond Exit 3 and follow the signs for the lookout).

This hike explores the northern end of the New Jersey Section of the Palisades Interstate Park, staying on top of the cliffs. For part of the way, it follows paths that have been designated by the park as "ski trails." Although these trails may be used by cross-country skiers whenever there is sufficient snow, they are also open to hikers all year round. The hike has two steep climbs, totaling about 200 vertical feet, on stone steps, but is otherwise relatively easy.

The hike begins at the northwest corner of the parking area at the State Line Lookout, at a sign for the Long Path. Follow the wide path into the woods. You’ll soon reach a junction where the Long Path, marked with aqua blazes, turns left and Trail A comes in from the left and proceeds ahead. Continue ahead on the wide path. Just beyond, you’ll come to another junction. Here, you should turn right onto Trail C. 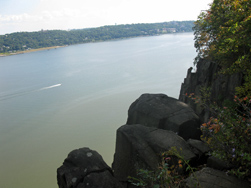 After a level stretch, the trail begins to descend. At the base of the descent, it crosses a stone-faced culvert over a stream. Soon, it reaches a Y-intersection, where Trails C and D diverge. Bear left and follow Trail D, which ascends gradually to the top of a rise and then descends steadily. When you reach a fork in the trail (marked by a signpost), bear left and descend more steeply.

At the base of the descent, turn left onto a wide concrete roadway, built in 1926 as a New Jersey state highway (it was subsequently designated U.S. 9W). The road was abandoned in the 1950s when the Palisades Interstate Parkway was constructed, but the concrete road sur 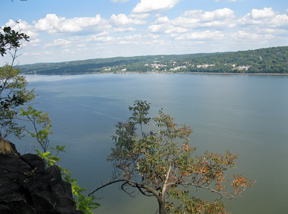 In about 300 feet, at the bottom of a short descent, you'll notice a sign on the right for the Long Path and the Shore Trail. Turn right, leaving the paved road, go through a gate in a chain-link fence, and follow an unmarked footpath which descends rather steeply to cross a stream on rocks. Just beyond the stream, the trail reaches a junction with the aqua-blazed Long Path.

Turn right and follow the Long Path downhill, parallel to the stream. Soon, you’ll reach another junction, marked by a triple-white blaze and a signpost for the Shore Trail. Here, the white-blazed Shore Trail heads straight ahead, but you should turn right, continuing to follow the aqua-blazed Long Path, which crosses the stream on wooden bridges. 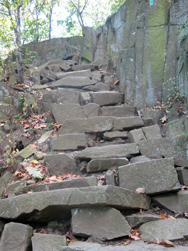 A short distance ahead, after traversing a rocky area, the Long Path turns sharply right and begins a steep climb on stone steps. This is the most strenuous part of the hike. At the top of the climb is High Gutter Point, a panoramic viewpoint up and down the river. To the north, you can see the Tappan Zee Bridge and, to its left, Hook Mountain, the northernmost point on the Palisades along the Hudson. Across the river are the tracks of Metro-North's Hudson Line (also used by Amtrak). You'll want to take a break here to rest from the steep climb and enjoy the view, but use caution, as the drop-off is very steep. You should also be careful not to touch the poison ivy which grows in this location.

The Long Path continues ahead, passing several more viewpoints, then climbs stone steps. After going through a gate in a chain-link fence that marks the boundary between New York and New Jersey, the Long Path briefly parallels the fence. When the trail bears left, away from the fence, continue ahead for about 50 feet to see a stone monument, placed in 1882 to mark the state line.

Return to the aqua-blazed Long Path, which turns left just beyond the monument, then takes the left fork at the next intersection (along with Ski Trail E). It follows an old woods road for about half a mile to reach the Old Route 9W (a wide concrete road), then turns left along the road and follows it for a short distance back towards the State Line Lookout. Just before reaching the lookout, follow the Long Path as it turns right, leaving the road, and continues on a footpath through the woods. After crossing a grassy area, it reaches the parking area where the hike began.