Take the New Jersey Turnpike to Exit 15W (or take the Garden State Parkway South to Exit 145) and proceed west on I-280. Take Exit 8B and proceed north on Prospect Avenue for 0.3 mile. Turn right at the traffic light onto Eagle Rock Avenue, continue for 0.3 mile, and turn left at the sign for Eagle Rock Reservation. Follow the park access road to the parking area adjacent to the 9/11 Memorial at the Eagle Rock Lookout (if the parking spaces opposite the lookout are full, continue ahead to a nearby parking area).

NOTE:  All Essex County parks, including Eagle Rock Reservation, are currently closed due to the coronavirus.  For the time being, please choose a different hike.  Note that New Jersey State Parks and most other county parks remain open for passive recreation.

This hike traverses the 408-acre Eagle Rock Reservation. The reservation is located in the center of densely populated Essex County, but it is mostly undeveloped and features an extensive trail system. The Olmsted Brothers, who designed Central Park in Manhattan, contributed to the design of the reservation. The footpaths and dirt roads followed by this hike have gentle grades, and the hike is suitable for novice hikers and families.

From the parking area, proceed ahead to the 9/11 Memorial. This beautiful and inspiring memorial to the tragic events of 9/11/01 is located at a panoramic viewpoint, from where the World Trade Center was visible. It affords a broad view over the New York City skyline, from the George Washington Bridge to the Verrazano-Narro 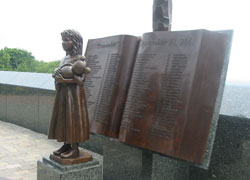 After taking some time to enjoy the view and contemplate the memorial, head north, towards the Highlawn Pavilion. Continue ahead under the awning of the pavilion and follow the service road that proceeds northward. At the next intersection, turn right and enter the woods on a footpath at a sign for the Lenape Trail.

The yellow-blazed Lenape Trail follows a wide path along the side of a hill, parallel to Crest Drive on the left. You’ll pass several outcrops of the basalt rock that is characteristic of the Watchung Mountains, on which the reservation is located. (There are three Watchung ranges; Eagle Rock Reservation is part of the First Watchung.) Unlike the New Jersey Highlands, which are made of sedimentary rocks, the Watchungs are composed of igneous rock, formed of intrusions of magma that rose to the surface through cracks in the earth. (The Palisades are formed of a slightly different type of igneous rock known as diabase, which cooled beneath the surface of the ground.)

In about half a mile, you’ll come to a fork, where you should bear left, continuing to follow the yellow blazes. Just beyond, the trail crosses Winding Way, a paved park road, diagonally to the right and continues along a chained-off dirt road, passing Kiosk #2. Here, a triple-blue blaze marks the start of the Blue Trail, and you follow both yellow and blue blazes along the road. Almost immediately, both trails bear right at a fork, and they bear right again at the next fork. At the following fork, where the two trails diverge, bear right to continue on the yellow-blazed Lenape Trail, which climbs to reach a junction with the White Trail (which begins on the left).

Continue along the Lenape Trail, which descends a little, then climbs past large outcrops of the basalt rock characteristic of the Watchung Mountains.Then, after passing a green fence on the right, the trail emerges onto an open area, with a good view of the Lower Manhattan skyline from a rock outcrop at the edge of the escarpment. This spot is known as the North Lookout. The Lenape Trail now bears sharply left and descends. At the base of the descent, the trail crosses a wide park road (the Crest Trail) and continues ahead on another unpaved road.

At the next intersection, with a huge stone residence visible ahead to the right, the Lenape Trail continues straight ahead, but you should turn left onto a dirt road – the route of the red-blazed Walking Trail, which begins here. Soon, you’ll notice the intersection of Afterglow Avenue and Ravine Road on the right. Here, you turn left to continue along the red-blazed Walking Trail, with backyards of homes on the right.

Just past the last home, you’ll reach an intersection with the Blue Trail. Turn right onto the Blue Trail, which follows a wide gravel path, together with the red-blazed Walking Trail. You’ll be following the Blue Trail for the next 1.3 miles.

After crossing a stream on a culvert, you’ll reach a fork. Here, the red-blazed Walking Trail bears right, but you should bear left to continue on the Blue Trail. Soon, you’ll come to a switchback, where the trail makes several sharp bends – first to the right, then to the left – to gain a little elevation. After making a long loop and passing just above the switchback, the trail crosses a grassy road. It then goes around another loop and crosses a dirt road (known as the Broad Wood Trail).

A short distance beyond, the Blue Trail descends, crossing an intermittent stream at the base of the descent. It passes a fenced-in enclosure on the right, crosses a white-blazed dirt road (the Stony Brook Trail) and soon joins another road (the Edgewood Trail), which descends slightly. 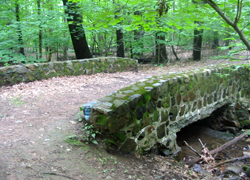 After crossing the dirt road, the Blue Trail climbs over exposed basalt outcrops to end at a junction with the yellow-blazed Lenape Trail. Turn left onto a dirt road, now following the yellow blazes, which soon bear right onto another road (the Crosswood Trail).

A short distance ahead, the Lenape Trail reaches a paved park road. The trail turns left to follow the road, but you should cross the road and continue ahead across the lawn to reach the parking area where the hike began.