Take I-287 South to Exit 52 (Riverdale/Wayne/Butler) and bear left at the fork to continue on NJ 23 South. In 0.6 mile, turn right onto County Alt. 511, then immediately turn right again onto West Parkway. In 0.7 mile, turn right onto Mountain Avenue, and continue for 1.0 mile (passing under I-287) to a dead-end at the parking area for Mountainside Park.

From the kiosk at the northern end of the parking area, climb wooden steps, following the Blue Trail. Almost immediately, you'll reach a junction, where the loop of the Blue Trail begins.  Continue straight ahead to follow the Blue Trail in the counter-clockwise direction. After passing a rock outcrop on the right, a black-dash-on-blue connecting trail begins on the left, but you should bear right to continue on the Blue Trail. 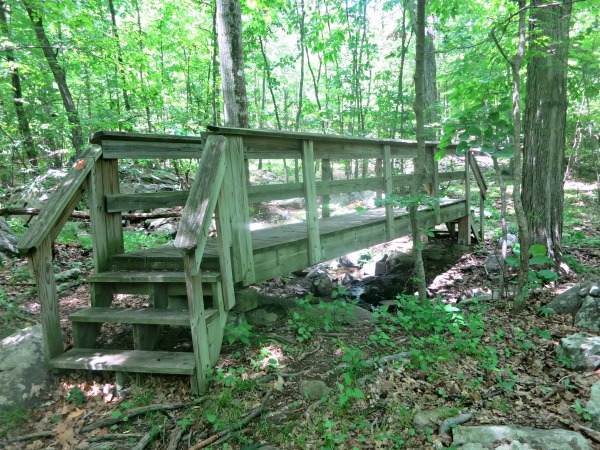 The Blue Trail now descends to a junction with a black-square-on-blue side trail, which begins on the right. Continue ahead on the Blue Trail, which climbs gradually to reach a limited east-facing viewpoint (when there are no leaves on the trees) from a rock outcrop on the right. The trail dips down, climbs to another seasonal viewpoint, then descends steadily.

After crossing a stream on rocks, you’ll come to a junction where the Orange Trail begins on the left. Continue ahead on the Blue Trail, which follows a contour around a hill, once again approaching I-287, but soon swings away from it. Soon, you’ll reach another junction, where the Orange Trail joins from the left. Turn right, following both blue and orange blazes, and cross a wooden footbridge over a stream, then immediately turn left, continuing to follow the Blue Trail, as the Orange Trail proceeds straight ahead to a lean-to and a picnic shelter.

The Blue Trail climbs steeply, paralleling the edge of a ravine, with cascades in the stream below. It then turns right, passing another lean-to and picnic shelter on the left, and crosses a gravel road (the route of the Orange Trail) diagonally to the left. A short distance beyond, the Blue Trail bears left and begins a steady, steep climb. A short level section provides a brief respite, but the trail soon resumes its steep climb. 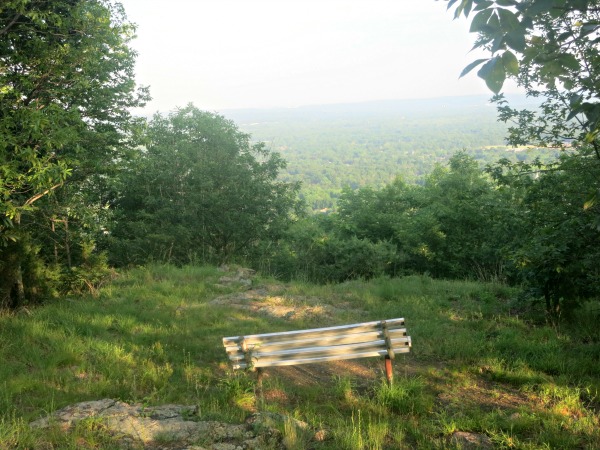 As the trail approaches the top of Pequannock Knob, it turns sharply left. Here, a rock outcrop just off the trail to the right offers an unobstructed panoramic view over northern New Jersey, with the New York City skyline visible on the horizon. After climbing some more, you’ll reach the summit of the knob, where the Orange Trail ends on the right. Benches placed on either side of the summit invite you to rest and enjoy the spectacular views. To the east, you can see the New York City skyline, and Cedar Crest Village (a retirement community) is visible below to the west.

When you’re ready to continue, descend from the summit, continuing to follow the Blue Trail. At first, the descent is rather steep, but after turning left at the point of a switchback, the grade moderates. At the base of the descent, you’ll cross a dirt road (the route of the Orange Trail), but continue ahead on the Blue Trail. Soon an orange/blue connecting trail goes off to the right, but you should bear left to continue on the Blue Trail.

The trail now descends along the edge of a ravine, with a stream below to the right. This tranquil, peaceful setting is far removed from the traffic on I-287! The trail turns right to cross the stream on a wooden footbridge and climbs steadily to the crest of a rise. Here, a red/blue connecting trail leaves to the right, but you should bear left to continue on the Blue Trail.

The Blue Trail descends gradually, passing between a rock outcrop on the left and a vernal pond on the right, then crosses the outlet of the pond. Just beyond, another branch of the red/blue connecting trail leaves to the right, but you should continue ahead on the Blue Trail.

After descending some more, a black-stripe-on-blue connecting trail begins on the left. You should bear right to continue along the Blue Trail, which climbs to skirt a huge rock outcrop and then descends through a valley. After passing a dramatic cliff on the right, the Blue Trail ends at the trailhead parking area where the hike began.