From the Belt Parkway take exit 25A from the left lane to the Southern State Parkway.  Continue on the Southern State Parkway for 18 miles.  Take exit 33 to Route 109 E and continue 2.6 miles on 109E to Sunrise Highway/NY-27 E/Montauk.  Continue for 54.3 miles.  Turn left on NY-27 E/New York State Bicycle Route 27 and continue 11 miles.  Turn left on NY-27 E/Main St/New York State Bicycle Route 27 and continue another 11 miles to the Hither Hills West Overlook on the left.

At the time of this hike the map holder at the Hither Hills West Overlook was stocked with black and white maps but other map holders along the way were empty so best not to count on getting a map upon arrival.  The East Hampton Trail Guide, a waterproof, tear  proof, full color map can be ordered from the East Hampton Trails Preservation Society in advance.  Click here for map ordering information.

Where a scenic overlook is considered the payoff for your hiking efforts, this hike starts off with advance payment right at the Hither Hills West Overlook parking lot.  Take in the 180-degree views that include the Atlantic Ocean on the other side of the highway before you begin your hike.

Although many of the trails are blazed with color-coded diamond markers, the corresponding colors are not shown on either of the maps.  Signs at intersections do let you know the name of the trail to reference to the map.

With your back to the highway turn left and proceed to the “Petticoat Hill Trail/Elisha’s Valley Trail/Fresh Pond” sign at the corner of the parking lot.  This trail, the Petticoat Hill Trail, is marked with brown diamonds and starts out on a wood chip walking surface which will become packed sand and dirt in .15 mile.   A few forks along the way merge back together so it doesn’t matter which way you go.  Keep to the left following the sign for Elisha’s Valley Loop when the Overlook Bypass Trail leaves to the right.

At .4 mile the Petticoat Hill Trail ends at Old North Road and the Hither Hills State Park sign.  Turn right on Old North Road for just a few steps then turn left on Elisha’s Trail through Elisha’s Valley. In .35 mile turn right on Old Tar Road for a short distance, then turn left towards the railroad tracks.  These are live LIRR tracks so be careful crossing.  A short distance after the tracks, arrive at an intersection where you will see white rectangle blazes painted on the trees along the trail straight ahead and also to the right.  This is the Paumanok Path, a 125-mile long-distance hiking trail that traverses Long Island.  You will be following the white blazes for most of this hike.  At times the white blazes will join in with the diamond markers of the park trails where both follow the same path.  When there is a turn on the white-blazed trail, it will be indicated by an upside down “L”, the top horizontal line pointing in the direction of the turn.  At this intersection, turn right and begin following the white blazes.  Although there is no sign, the Stephen Talkhouse Trail, shown on the map, will co-align with the Paumanok Path all the way to Quincetree Landing, 2.8 miles to the east.

In half of a mile reach picturesque Fresh Pond.  Several side trails to the left bring you directly to the pond for better views over the next 10th of a mile.  The white-blazed Paumanok Path then turns right leaving Fresh Pond.  In .2 mile, when the white blazes instruct you to turn right, turn left on Fresh Pond Landing Road, marked with purple diamonds, instead.  In .1 mile arrive at the Napeague Bay beach.  Make note of the Waterfence Overlook Trail on the right – return to this trail if you go all the way to the beach first.

Take the Waterfence Overlook Trail as it climbs fairly steeply for a short distance to the top of a bluff for great views of Napeague Bay.  From this viewpoint, turn around, walk through the small parking lot, then along the access road.  In just a few steps rejoin white-blazed Paumanok Path by turning left when it crosses over the access road.  In .15 mile the Paumanok Path turns left at a T-intersection and starts to parallel the live railroad tracks.  Chances are you won’t see a train go by but if you do, it is a different kind of experience seeing a train go right through the woods.

The Paumanok Path veers away from the railroad tracks to the left 2.5 miles into the hike.  Shortly after this turn watch for old Indian house ruins on the left.  The Paumanok Path now leads along the top of the bluffs where the trail is cut into the packed sand between gnarly, stunted, wind-beaten trees and vegetation.  Painted blazed will be rare along this stretch for lack of a surface to paint them on.  Some blazes painted on rocks are almost completely covered with sand.  Just keep straight on the trail ignoring any side trails, following along the contour of the beach below.  You’ll catch many bluff top views of the bay and shoreline over the next half mile.

About .35 mile after The Notch, the white-blazed Paumanok Path leaves Old Notch Road to the left joining up with the Coastal Trail.  In another .35 mile, leave the white blazes to the left on an unmarked and unnamed side trail (only shown partially on the map) that heads back to the top of the bluffs, veers right and leads to a flat grassy area, Duck Bluff, 5 miles into the hike.  This is a great spot to take a break and enjoy the views over Block Island Sound.

To rejoin the Paumanok Path, with your back to the water, follow the unmarked trail straight ahead for a short distance to a T-intersection with the Paumanok Path; turn left to resume following the white blazes.  (Maps do not show this connector trail.)

The Paumanok Path now hugs the top of the bluffs again and bends around to rejoin Old North Road in .7 mile.  The combined white rectangle/green diamond path leads to Dyer’s Landing at Rocky Point overlooking Fort Pond Bay.  In a quarter of a mile turn right when the white blazes leave Old North Road and join the tan diamonds of Redmond’s Path. In a quarter of a mile, cross over the live LIRR tracks for the second and last time, then cross a sand road a few steps later and veer right at a fork not shown on the map.

In .2 mile turn left on Riah’s Ridge Trail, cross Rod’s Valley Road and ascend to Riah’s Ridge through mountain laurel tunnels.  The trail descends the ridge and turns left on Flaggy Hole Road, marked with blue diamonds.  In .15 mile turn right on Lost Boulder trail and arrive at the lost boulder in another .15 mile.  You can’t miss this huge glacial erratic that borders the trail on the left.

Lost Boulder Trail brings the Paumanok Path back out to the blue-blazed Flaggy Hill Road once more and continues almost to it’s end just before Power Line Road.  Watch for the white blazes to leave to the right on a footpath just before this intersection.

In .15 mile cross a woods road and note the huge mound to the right at this intersection.  That is the capped Montauk landfill, now a recycling center on the other side of the mound.  It’s a sobering sight to see where our garbage ends up – a mark on the landscape forever.  Arrive at a woods road that comes in from the left and forks to the right.  Cross the over first fork then turn right on the second fork.  The Paumanok Path will now circle around the temporarily out-of-sight landfill area over surprisingly hilly terrain and through Laurel Canyon, a 75-foot deep gully. 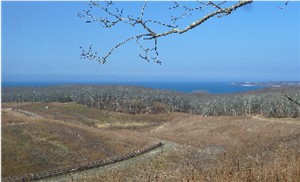 Exiting Laurel Canyon, the Paumanok Path turns right briefly on Upland Road then leaves to the left on a footpath.  This path ascends to an overlook above the capped landfill.  You can look back at Fort Pond Bay and Block Island Sound, the places you hiked earlier.

Continue on the Paumanok Path another .3 mile as the traffic sounds of Route 27 become louder.  Just before the highway the white blazes turn left.  Leave the Paumanok Path now and turn to the right following the trail parallel to Route 27.

In .2 mile cross the paved recycling center road and continue through the hiker parking lot on the other side to find the beginning of the yellow-blazed Split Rock Road.  In .4 mile continue following the yellow markers when Midland Road forks right.  At the next intersection, turn left keeping with the yellow markers when the red-blazed Ram Level Loop starts to the right.  In another quarter of a mile, arrive at the trail’s namesake, a large split rock on the left side.

When the Split Rock Trail ends, turn right on the gray-blazed Parkway Trail running parallel to Route 27.   In .2 mile cross Power Line Road then in a few steps the Serpent’s Back Trail.  Arrive back at the parking lot in .1 mile.