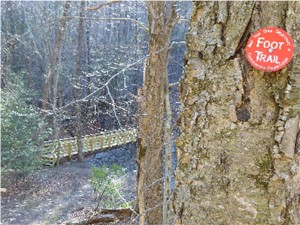 Walk out of the parking lot and turn left on County Road 42 for a short distance.   Cross the road to the right at a red circular trail marker and follow the trail downhill to a very sturdy bridge over Kanape Brook.  This bridge replaced the one destroyed by Hurricane Irene in August 2011.  Shortly after crossing the bridge, sign in at the trail register.

Follow the well-defined woods road, marked with the circular red discs (and every so often a yellow ski trail disc) as it follows along Kanape Brook, complete with babbling brook sounds, then starts to ascend higher above the brook.   About three quarters of a mile into the hike, old stone walls line the woods road.  At 1.5 miles enter an area of mountain laurel before crossing the brook on a wooden footbridge.

Cross several tributaries that feed into Kanape Brook, some via rock hops, others on old culverts.  Pay particular attention to the stream crossing at the 1.9-mile point as it is not obvious where the trail continues on the other side.  Rock hop over, then turn left to see the red markers following along the right bank of the stream.

The trail now leads away from water and arrives at a junction at the 2.7-mile mark.  Do not continue straight ahead as the woods road now enters private property.  The turn is clearly marked with a sign and arrow; turn left leaving the woods road and continue on a footpath.  Just a few steps ahead the trail forks; keep right.  Left will be the return route.  The trail will now start to ascend more steeply.  Up to this point the ascent has been a little over 900 feet in 2.7 miles.  You will now climb another 1,000 feet over the next mile.

Keep left at both 2.95 and 3.05 miles when trails branch off to the right.  There probably won’t be much to see when the trees are in full bloom but without the obstruction of leaves, remember to turn around to enjoy some views on the way up.

At the 3.25-mile point the terrain might remind you of the tiers of a wedding cake.  The trail will ascend steeply on rocks and then level out for a while before ascending steeply and leveling out again.  Just when you think you have reached the top, another level comes into view.  Stone steps built into mountain facilitate the steep rock climbs and you can catch a break (and your breath) on the level sections. 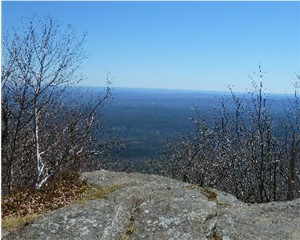 At 3.75 miles arrive at the top level, the 3,080-foot high summit of Ashokan High Point.  To the right are views of Roundout Valley and the Shawangunk Ridge.  Graffiti dating back to the latter part of the 1800’s is etched into the rock surfaces.  Two benchmarks and old bolts are anchored into the stone.  The red trail markers continue to the left.

The views from the summit have become overgrown over the years and are minimal unless the leaves are down.  An optional out-and-back hike on an unmarked, often undefined path, leads to an overlook about a quarter of a mile away on what is sometimes called Little High Point.   A footpath leaves the Ashokan High Point summit area at the northern end but soon fizzles out.  Veering to the right, a bushwhack down a steep section along the ridge will eventually meet up with a more defined path to a campsite in the saddle.  From there a path leads up through dense blueberry patches to outstanding unobstructed views from rock slabs.

From the Ashokan High Point summit, continue on the red-blazed trail for 1/10ths of a mile to a short unmarked side trail on the left that leads to views.  Retrace and continue on through one blueberry patch veering left into another larger open blueberry patch.  A large fire ring with some stone chairs is a prominent fixture in the clearing.  Use this as your reference point if you want to explore this area as the trail can be difficult to locate with several herd paths crossing in this vicinity.  You may be able to catch a glimpse of the Ashokan Reservoir by following paths to the right depending on the fullness of the foliage.  When finished exploring, return to the fire pit with the stone seating and stand as you would having come in on the trail from the summit.  Turn left at the fire pit,  proceed straight ahead, and you will soon see the familiar red trail markers again.

The trail will ascend some before making a sharp left turn at the 4.85-mile mark.  Ignore cairns and side trails branching off along the way.  After a level section, the trail will begin to descend more steeply as it becomes a wider path on loose rocks – watch your footing here, it can feel like walking downhill on marbles.

The trail narrows and becomes less rocky as it enters a section of mountain laurel, then widens again upon exiting the mountain laurel at the 6-mile mark.  In another .4 mile, arrive at the fork that brings you full circle from earlier in the hike.  Keep right, then right again as you begin to retrace your steps back on the old woods road.

Watch for that tricky turn at the creek in another .2 mile but in reverse this time.  Turn left at the creek and walk along the left bank a short distance before turning right and rock hopping over to continue following the red markers.

Cross the small wooden foot bridge at the 7.5 mile point, then continue retracing along Kanape Brook all the way back.  Don’t forget to sign out at the trail register before crossing the bridge to return to the parking lot.