From I-287 north or south take Exit 53 (Bloomingdale) and turn left onto Hamburg Turnpike. Upon entering Bloomingdale, the name of the road changes to Main Street. In 1.3 miles (from I-287), you will reach a fork in the road. Bear right (following the sign to West Milford), and in another 0.1 mile, turn right (uphill) onto Glenwild Avenue. Proceed for another 0.3 mile to the intersection of Woodward Avenue (on the left). Opposite this intersection, you will notice a dirt parking area bordered by stones on the right. Turn right and park here.

This short loop hike circles the 44-acre Friendship Park in Bloomingdale, owned by the County of Passaic. The trails in this park have been blazed by volunteers of the New York-New Jersey Trail 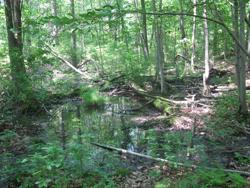 From the parking area, follow a gravel path across a grassy area. At the edge of the woods, a triple-orange blaze marks the start of the Orange Trail, a loop trail that you will be following for the entire hike. Enter the woods and bear left to proceed around the loop in a clockwise direction.

Soon, you’ll reach a Y-intersection, where the Yellow Trail begins on the right. You should bear left to continue on the Orange Trail. At the next intersection, the Red Trail proceeds ahead on the wide path that you have been following, but you should turn left and descend on a narrower path, continuing to follow the orange blazes. The Orange Trail crosses a stream on rocks and bears left (as the Blue Trail begins on the right), then loops around to the right and begins to climb.

Approaching a chain-link fence (the fence marks the northern boundary of the park), the trail bears right and begins to parallel the fence. It soon bears left and begins to climb more steeply. After reaching the crest of the rise, the trail bears right again and descends steadily. On the way down, at a cairn, the Blue Trail joins from the right. At the base of the descent, with an interesting wetland on the right, the Blue Trail leaves to the right. 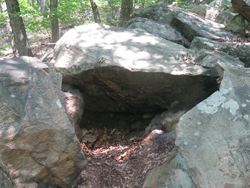 After going around an S-curve to avoid some blowdowns, you’ll arrive at the next intersection. Here, the Yellow Trail proceeds ahead on the wide path that you have been following, but you should turn left, continuing to follow the Orange Trail, which begins to climb. At the crest of the rise, the trail turns sharply left and descends a little. It then climbs to a large rock ledge, with a small tree growing out of a crack in the rock.

The trail descends from the ledge, then climbs a little. Soon, it begins a steady descent, passing an interesting rock outcrop on the left and several huge boulders arranged to form a natural “fireplace” on the right.

At the base of the descent, the Orange Trail crosses a wet area, curves to the right, and continues on a wide path. After passing several huge oak trees on the right, you’ll notice a wooden footbridge on the left. Just beyond, you’ll arrive at the grassy area on the left where the hike began. Turn left and follow the gravel path back to your car.