Take the Garden State Parkway South to Exit 145 and proceed west on I-280 to Exit 7 (Pleasant Valley Way). Turn left at the bottom of the ramp and continue for about three miles to the Tulip Springs area (marked by a sign on the left). (The turn is 0.8 mile beyond Northfield Avenue, where the road changes its name to Cherry Lane.) Turn left into the Tulip Springs area, then bear right and continue for 0.2 mile to a large parking area on the right.

Continue straight ahead, leaving the Lenape Trail, and follow the orange-blazed Turtle Back Trail, which curves right, then left, and passes a huge tree. After crossing a bridle path at a culvert, follow the orange blazes uphill at a signpost for the Turtle Back Trail. Watch for a double blaze and continue along the orange trail as it turns left onto a footpath and climbs on switchbacks. The trail follows along the side of a hill, overlooking the valley below, then winds around more switchbacks and begins to parallel a ravine below on the right.

After climbing yet another switchback, you’ll reach a four-way junction where an orange/white trail begins on the left. You should turn right to continue on the orange-blazed Turtle Back Trail. A short distance below, the orange trail approaches a bridle path but turns left and continues on a footpath. Follow the trail, which now heads north, roughly parallel to a bridle path on the right, which comes into view occasionally. 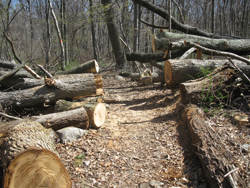 The orange trail proceeds along a relatively level footpath, passing a number of trees that were felled by Hurricane Sandy in October 2012. After crossing three more bridle paths in the next mile, the trail reaches a T-intersection. Here, the orange blazes turn left, but you should turn right and begin to follow an orange/white-blazed trail. When you reach a bridle path (with a parking area visible ahead), turn left, but when the bridle path curves left just ahead, continue straight on a footpath (at this writing, some orange/white blazes along the bridle path are missing).

The orange/white-blazed trail soon curves to the left and begins to run above the very busy Northfield Avenue. Watch carefully for a right turn that leads to Turtle Back Rock - named for the patterns on the surface of the rock. When the basalt rock of the Watchungs fractured into small hexagonal blocks, the cracks that were created filled with minerals. The basalt wore away faster than the minerals, leaving the rock with patterned markings, similar to those on the back of a turtle. The best examples of these “turtle back” patterns can be seen on the back of the large rock, as well on smaller adjacent rocks. 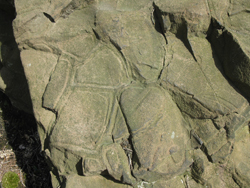 After crossing another bridle path, you’ll reach a four-way junction. Continue straight ahead, now once again following the orange-blazed trail. Over the next mile, the trail crosses two bridle paths and begins to descend. As it descends steadily, the southern end of the Orange Reservoir may be visible through the trees on the right during leaf-off season.

Be alert for a sharp right turn where the orange-blazed trail descends to cross another bridle path, then bears left and continues to descend on a woods road. Just before reaching a stream, the orange trail turns left onto a footpath and continues parallel to the stream. After climbing a little and passing a cascade in the stream below, the trail continues through a pine grove. It soon reaches a junction with the yellow-blazed Lenape Trail, where you should turn right and descend to the parking area where the hike began.