Take I-287 to Exit 57 and continue on Skyline Drive to its western end at Greenwood Lake Turnpike (County Route 511) in Ringwood. Turn right and proceed for 8.2 miles to an intersection with Lakeside Road. Turn right and follow Lakeside Road (still designated County Route 511) for 2.5 miles to the Greenwood Lake Marina, just south of the New Jersey-New York boundary. Turn left and park on the left side of the dirt access road, on the west side of Lakeside Road.

If you are driving to the hike but have only one car, walk north on Lakeside Road, crossing into New York, until you reach a bus stop on the east side of the road.  Take the #197 bus to Route 17A and Kain Road.

If you have two cars, park one car here and, with the second car, continue north on Lakeside Road (designated Route 210 in New York) for 3.5 miles. In the Village of Greenwood Lake, turn left onto Windermere Avenue (still N.Y. Route 210), then, in 0.5 mile, bear left onto N.Y. Route 17A. Continue for 1.9 miles to the top of the hill, and park in a designated parking area for the Appalachian Trail, on the left as you reach the top of the hill. You can also park on Continental Road, just beyond on the left, and walk a short distance back to the trail.

You can also reach the start of the hike via NJ Transit bus #197.from the Port Authority Bus Terminal in New York City,  Ask the bus driver to drop you off at Route 17A and Kain Road, then walk back a short distance to Continental Road and the trailhead. Buses run about every two hours, so be sure to consult the timetable, available online at www.njtransit.com

This hike traverses a spectacular six-mile section of the Appalachian Trail. The first two miles are relatively level, but the last four miles involve many short but steep climbs and descents, as the trail traverses a series of rock outcrops.

From the parking area, follow the white-blazed Appalachian Trail as it heads south into the woods, crossing several stone walls. 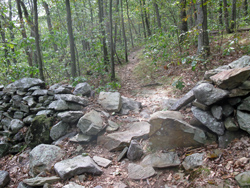 In 0.4 mile, the trail crosses a seasonal stream and climbs to cross under a power line, with an interesting outcrop of puddingstone conglomerate rock on the left.

The trail now climbs steeply to the crest of the ridge, then begins to descend, passing more puddingstone rock outcrops on the left. After crossing a seasonal stream, the outlet of a marsh on the right, the trail begins a gradual climb. It soon levels off (an unmarked path to the left leads to a clearing atop a large rock outcrop, with several cedars and a limited east-facing view). A short distance beyond, the trail passes through an area with hemlocks and mountain laurel thickets, with puddingstone rock outcrops on the left.

About two miles from the start of the hike, you'll reach a junction where the blue-blazed Village Vista Trail starts on the left. This trail leads down to the Village of Greenwood Lake, but you should continue ahead on the white-blazed Appalachian Trail. A short distance beyond, the trail emerges onto open conglomerate rock ledges on the east side of the ridge. Continue ahead, climbing slightly, until you reach an outcrop that offers a panoramic view over Greenwood Lake. This is a good place to stop and take a break. The trail continues ahead, crossing more rock outcrops, with vegetation obstructing some of the views. After reaching the last in the series of these outcrops, the trail bears right and begins a steep descent. At the base of the descent, it crosses a seasonal stream. The trail now climbs a little, then continues through hemlocks and rhododendrons.

After crossing another seasonal stream, the trail follows a rock ledge and then descends through thick hemlocks and rhododendrons to reach a clearing next to Cascade Brook, which is crossed on rocks. After a level stretch, it climbs to a rock outcrop (with no views), then descends through hemlocks, mountain laurel and rhododendron, crossing a stream at the base of the descent.

The trail now begins to climb, soon passing a large rock cairn at the start of a long rock outcrop, with views to the north and limited views to the east over the hills of Sterling Forest. For the next mile or so, the trail 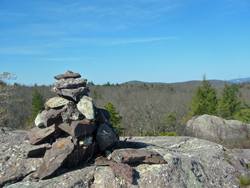 traverses a series of rock outcrops, with many short but steep climbs and descents. This is a relatively difficult but quite spectacular section of trail. There are some views to the east over the hills of Sterling Forest but, for the most part, views of Greenwood Lake are blocked by the trees.

After a short stretch through the woods, the trail climbs to a massive rock outcrop, again marked with a huge cairn. This outcrop offers a 360-degree view (although trees obscure the view of Greenwood Lake), and it is a good place to stop and take a break. The trail descends from this outcrop and continues through the woods, traversing a number of smaller outcrops.

Finally, you'll climb to the top of a large rock outcrop that offers an expansive view to the southeast over Greenwood Lake. You’ll want to take a break here to contemplate this spectacular panorama. Just beyond, there is a west-facing view, and then you’ll descend a near-vertical rock slab on a metal-rung ladder and continue descending steeply on huge rocks. 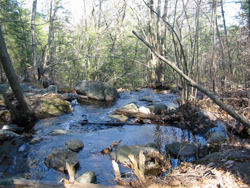 After crossing a seasonal stream, the trail descends gradually. It proceeds through hemlocks along the side of a hill, then crosses the wide Furnace Brook on rocks and logs, with a cascade on the left. It continues on a nearly level footpath. After crossing another seasonal stream on rocks, the trail passes a wetland on the right and climbs gently along a rocky footpath that resembles a streambed (it actually is the route of a stream during wet periods). Rock outcrops soon appear on both sides of the trail, and the trail continues through a narrow valley.

Soon, the trail turns right and climbs out of the valley. Near the top, the trail turns sharply left, but you should take a short detour to the right to reach the top of a rock outcrop with views to the north, east and west. Although Greenwood Lake is not visible from this vantage point, it offers the broadest view on the hike. 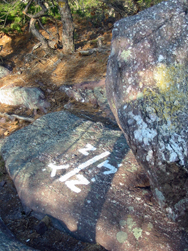 Return to the trail, which soon begins to run along a rock ledge. A short distance beyond, the blue-blazed Zig Zag Trail, which leads to Cascade Lake Park in the Town of Warwick, begins on the right. You should continue straight ahead. The trail now climbs to Prospect Rock, an outstanding vantage point over Greenwood Lake, with the hills of Sterling Forest beyond. On a clear day, the skyscrapers of New York City may be seen on the horizon.

From Prospect Rock, the trail descends on a grassy woods road, interrupted by various rock outcrops. After passing through a dense growth of pitch pines, the trail arrives at the New York-New Jersey state line, marked by initials painted on the bedrock.

A short distance beyond, you'll reach a junction with the blue-on-white-blazed State Line Trail. Turn left, leaving the white-blazed Appalachian Trail and follow the State Line Trail as it heads east, crossing several minor ridges. In about half a mile, the yellow-blazed Ernest Walter Trail begins on the right, but you continue ahead on the State Line Trail, which descends steadily to end at the parking area on Lakeside Road, where you left your car.