Take I-80 to Exit 34A (Wharton/NJ 15 South). Turn right at the first traffic light onto East Dewey Avenue and continue for 1.1 miles (beyond the next traffic light, the street name changes to West Dewey Avenue). After crossing a bridge over the NJ Transit Morristown Line, make the first left turn onto West Central Avenue. Beyond the Borough of Wharton Public Works facility, bear right at the fork, then immediately turn right into Hugh Force Canal Park. Park just beyond the entrance (before you reach a private residence on the right).

This hike follows a section of the Morris Canal, which connected the Hudson and Delaware Rivers via a route that traversed Morris County. When it was opened in 1831, the canal was considered an engineering marvel. It used 23 locks and 23 inclined planes to ascend from sea level to the 914-foot-high Lake Hopatcong and then descend to the Delaware River. Railroads made the canal obsolete, and much of the canal was obliterated when it was abandoned in 1924.

Begin the hike by proceeding ahead along the long, narrow parking area, which is actually a filled-in section of the old Morris Canal. Soon, you will reach a section of the canal that has been restored. Signs along the towpath relate the history of the canal and include a map of the canal in Wharton. Continue ahead on the canal towpath, with the Rockaway River below on the right. As you walk along, look up at the hillside across the canal and note the extensive stone retaining wall. This wall was built to support the tracks of the Central Railroad of New Jersey’s High Bridge Branch. The railroad was abandoned many years ago, and this section of the roadbed has been converted to a hiking trail and will be your return route.

Soon, you’ll reach Lock 2 East of the Morris Canal. When the canal was abandoned in 1924, the lock was buried in debris, but it has since been restored. Most of the stone used to reconstruct the lock is original. The ruins of the Lock Tender's House (occupied as late as the 1970s) are in a fenced-off area across the canal. 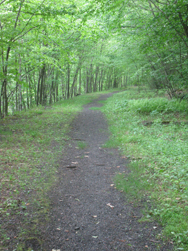 Continue ahead on the grassy towpath. The marshy area to your left formerly served as a basin for the canal. A short distance beyond, the canal towpath ends at a cinder slope. Climb the path leading up the slope to the railbed of the abandoned Lake Hopatcong Railroad, a subsidiary of the Central Railroad of New Jersey. The scrap-metal yard west of the railroad has obliterated the remains of the canal in this area (before it was abandoned, this was the site of Inclined Plane 4 East of the canal).

The right-of-way now emerges onto the power line clearing, with the former canal basin below on the left and the canal itself beyond. From this high vantage point, you can get a good view of Lock 2 East. Beyond the clearing, the right-of-way enters a wooded area, with an attractive forested slope on the right, and the canal and towpath below. This is a particularly beautiful section of the hike, and you will notice some old railroad ties along the right-of-way.

Towards the eastern end of the parking area, the railbed ends as it approaches a home which has been built on the right-of-way. Bear left and follow a side trail which descends to the parking area where the hike began.